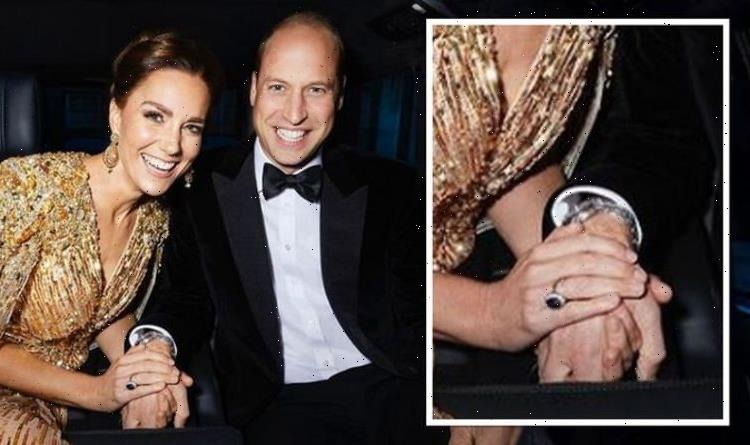 Princess Diana and Kate Middleton: A look at their piano playing

The Duke and Duchess of Cambridge delighted royal watchers by sharing an unseen snap.

The snap shows Kate and William sitting next to one another in the back of a car holding hands and looking at the camera.

The charming post was accompanied by the message “Wishing everyone a Happy New Year!”

The snap was taken during the James Bond premiere in London back in October.

For the event, the Duchess wore a gold Jenny Packham dress which cost a whopping £3,893.28.

She explained: “Some of William and Kate’s most spontaneously fun and flirtatious body language moments were snapped years ago in the backs of chauffeured cars after evenings spent partying during their dating days.

“Here, many years and three gorgeous children later, they manage to show that their relationship has lost none of that spark and ability for moments of pure joy in one another’s company.

“Kate looked sensational in this shimmering gold gown at the Bond premiere.

“And it is obvious from this pose that the couple not only relished the glamour of the night out but that they also treated it as a date night once they were alone in each other’s company.”

Judi continued: “These are not the social smiles of two royals doing their duty at a public appearance.

“These are the authentic, glowing smiles of a couple grinning ear to ear with happiness in each other’s company.”

Judi explained “William looks more relaxed than we have seen over this tumultuous year”.

“Sitting leaning in towards his wife with his arm on the arm of the seat and wearing an edge-to-edge of the teeth, wide smile that signals excitement and a very youthful sense of happiness.

“Kate leans in towards him, pushing her head towards his as she performs an almost identical smile of utter joy.

“Her double hand clasp is one of the most powerful PDAs we’ve seen from the couple.”

The body expert continued: “With one hand under his and the other lying on top to display her engagement ring, Kate appears to use this non-verbal signal to show how precious her husband is to her.

“In terms of a power-pose from a future King and Queen, this is probably one of the most evenly-matched pairings that we have seen in the Firm.

“Their mirroring shows their bonds of like-minded thinking but their admiration for each other looks twinned as well.

“In many ways this was the Duchess’s night as she shone like A-list celebrity on the red carpet, but this very affirming hand clasp suggests she was also a little entranced by her husband’s Bond-like credentials, too,” Judi explained.