Australian of the Year Grace Tame says allegations of rapes involving political figures are not surprising to her, as the culture that allows sexual assaults is widespread.

Speaking at the National Press Club on Wednesday, Ms Tame responded to questions about how two prominent rape allegations had been made against political figures just weeks after she was named Australian of the Year for campaigning for victims of sexual assault. 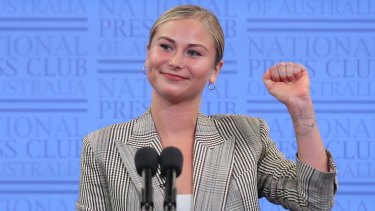 Australian of the Year Grace Tame during her address to the National Press Club.Credit:Alex Ellinghausen

“It’s not surprising to me at all. Coverup culture, the abuse of power, is not unique to Parliament,” she said.

“It’s not necessarily individual cases, it’s the issue itself that is going to inspire me to do this work. I was doing this work before it dominated the national stage. It is heightened right now because it’s happening in the centre of our country in Parliament but like I said it’s not unique to Parliament. It happens everywhere.”

Ms Tame declined to comment on the allegations by former Liberal party adviser Brittany Higgins who says she was raped by a male colleague in Defence Minister Linda Reynolds’ parliamentary office in 2019.

However, Ms Tame responded to Mr Morrison’s decision to frame his response to Ms Higgin’s claims by referring to a discussion he had with his wife Jenny, who encouraged him to view the situation “as a father first”.

In her speech, Ms Tame said it took 23.9 years on average for survivors of child sexual abuse to be able to speak about their experiences, as she called for governments to make significant reforms including streamlining laws around consent across jurisdictions.

“We have eight different state and territory jurisdictions and eight different definitions of consent. We need to agree on something as absolute as what consent is,” Ms Tame said. “Only then can we effectively teach this fundamentally important principle consistently around Australia.”

She said she had been contacted by hundreds of sexual assault survivors in recent weeks and urged them to “share your truth”.

“Remember you have the power and you have the control. It’s your voice, it’s your story, and nobody else can tell it, and they can’t tell you how to tell it,” she said.

Ms Tame was named the 2021 Australian of the Year in January, after her work in helping overturn Tasmanian laws that prevented her from speaking about her rape as a teenager by her 58-year-old teacher.