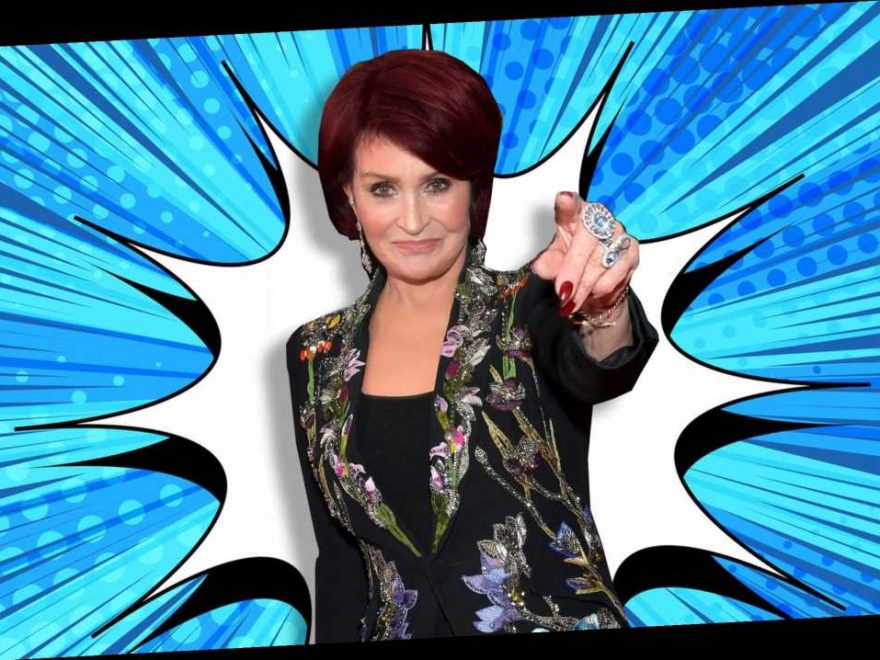 Sharon Osbourne lawyers up amid ‘The Talk’ race drama

Sharon Osbourne is used to living on the edge — and finding a way to prevail no matter what’s thrown at her.

Her father once threatened to kill her. Her mother’s dogs attacked her, causing Sharon to miscarry. Her husband, rocker Ozzy Osbourne, has admitted to trying to strangle her — twice — and to cheating on her for years. She’s successfully battled colon cancer.

But some of her friends say the famously feisty 68-year-old is at a loss for the first time. On Friday, it was announced that Sharon would leave “The Talk” after being accused of racism following a heated exchange with her co-host Sheryl Underwood earlier this month.

Following two weeks of what sources say were tough negotiations between Sharon’s camp and CBS, she allegedly received a seven-figure payout to leave the show.

“It was all pretty ridiculous. But you have to remember CBS has a bad track record with the Moonves stuff,” a source familiar with Sharon’s exit told The Post, referring to CBS chairman Les Moonves stepping down in 2018 after sexual assault allegations against him. (He denies the allegations.)

“This is like a big display to let everyone know that they take these kind of complaints seriously,” said the source. “It would have been riveting if Sharon had stayed. She was willing to say she overreacted. But as it stands now, she wants to go. She’d be hamstrung if she stayed. This is why people are avoiding TV and listening to podcasts instead. You can speak freely on those.”

Still, friends say Osbourne loved “The Talk” and will miss it.

“To be so misrepresented is so astonishing and devastating,” Belle Zwirdling, Sharon’s friend of 40 years, told The Post. “Sharon was seriously confused from the moment this all went down and now she is being persecuted and scapegoated. It’s abominable, and she’s having a bad time.”

Those who knew Sharon as the tough-as-nails music manager who helped make her husband Ozzy into a star hardly recognized the teary woman on the tense March 10 episode of “The Talk.”

Sharon, who’s been on the CBS daytime show since it launched 11 years ago, defended her friend Piers Morgan’s right to free speech in the wake of backlash the British journalist got for remarks he made about Meghan Markle, including that he “[didn’t] believe a word” of her Oprah interview. But when Underwood argued that Morgan’s statements were racist and that Sharon was giving them “validation,” the debate got heated. Sharon welled up in tears, saying she felt “like I’m about to be put in the electric chair.” 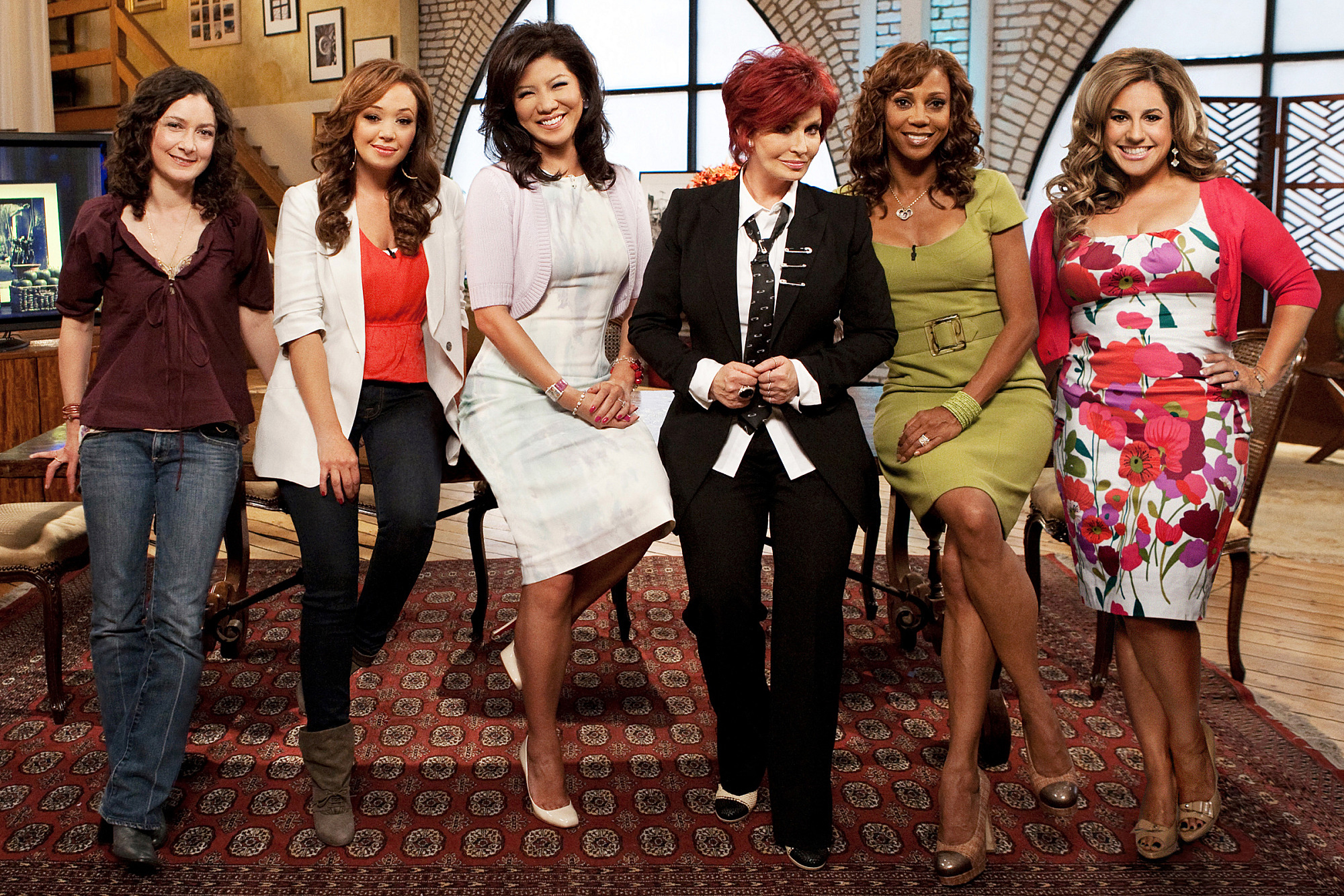 “The Sharon I know would have punched someone out,” her friend Doc McGhee, the longtime manager of KISS, told The Post.

“She would have cut someone’s jugular vein out by this point. But that was back in the day when being tough was part of the game and people respected you for having convictions, no matter where you stood. Today it’s all a witch hunt, and they want to ruin you if you don’t say exactly what they think you should say.”

A source told Page Six that Sharon felt “set up” by producers. In the statement, CBS said it “did not find any evidence” of this, but added that the network and showrunners are accountable: “… the co-hosts were not properly prepared by the staff for a complex and sensitive discussion involving race.”

At the same time, co-host Elaine Welteroth and her hairstylist reportedly complained to HR about an alleged “racially insensitive and hostile environment.” 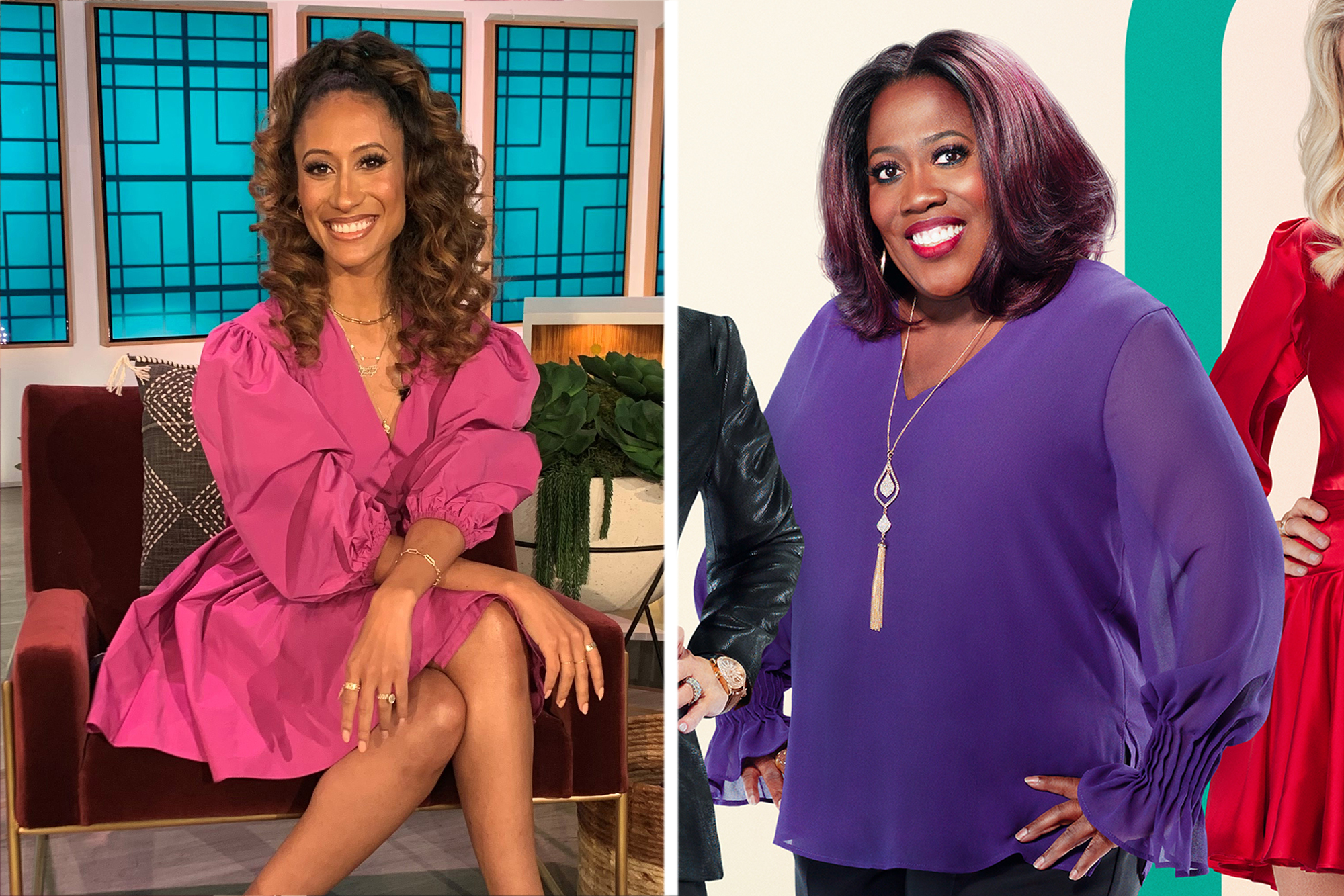 “She thinks she’s in a hostile environment now?” cracked McGhee. “She should have known Sharon in the ’80s!”

After all, this is a woman who once kneed a concert promoter in the crotch and, she has said, “whacked him around the head” because she thought he was being shady about money. And then there was the time she reportedly defecated in singer Lynsey de Paul’s suitcase after an argument.

But this kind of turbulence doesn’t fly anymore.

Following Welteroth’s complaint, CBS took the unprecedented step of temporarily pulling the show pending an “internal review,” although Sharon tweeted an apology saying she did not “condone racism, misogyny or bullying.”

Former co-host Holly Robinson Peete went on to allege that Sharon called her “too ghetto” to be on the show. “The Talk” alum Leah Remini claimed Sharon referred to former cast-mates Julie Chen, who is Chinese American, as a “wonton” and “slanty eyes,” and called Sara Gilbert, who is a lesbian, a “p – – – y licker.” Sharon has denied these claims.

Since then, she has been holed up with Ozzy at their $12 million mansion is Los Angeles’ Hancock Park neighborhood.

“It’s heartbreaking for her,” Zwirdling said. “I was there when she sent a text to Sheryl to apologize, and to not hear back was terrible.”

Still, McGhee said CBS must have had a fight on its hands with Osbourne and her powerful lawyer, Jeremiah Reynolds. And he doesn’t expect Sharon to hold her tongue too much going forward.

Sharon acquired her grit the hard way. She was born Sharon Levy in London to a Jewish father and Irish mother and spent her early years in downmarket south London before the family moved to posh Mayfair.

Her father Harry, who changed his name to Don Arden, was a hard-driving concert promoter and manager known as the “Al Capone of music” who used gangster tactics like beating people up, waving around guns and stealing money from his own acts — and his own daughter — to get ahead. He once dangled his fellow music impresario Robert Stigwood, known for managing the Bee Gees, by the legs from a hotel balcony in a dispute.

Sharon described her mother, Hope, as cold and unloving, in her autobiography, “Extreme.”

In a 2007 interview, Sharon said that violence was an everyday occurrence during her childhood.

“I was surrounded by violent people, violent talk, violent behavior, so there was nothing unusual seeing my dad threatening someone, or brandishing a firearm,” Sharon said. “It seemed normal. I thought everybody was like this. It was part of our lives.

“My father really had a temper. He had a voice which would echo through the entire house. A couple of times he would whack me and he used to yank my hair. I wouldn’t say I was abused and beaten; in those days it was a normal thing.”

She began working with her father when she was a teenager and Don was managing the heavy metal group Black Sabbath, among others. In 1979, when he fired the band’s frontman Ozzy Osbourne, she took over the singer’s management, infuriating her father. 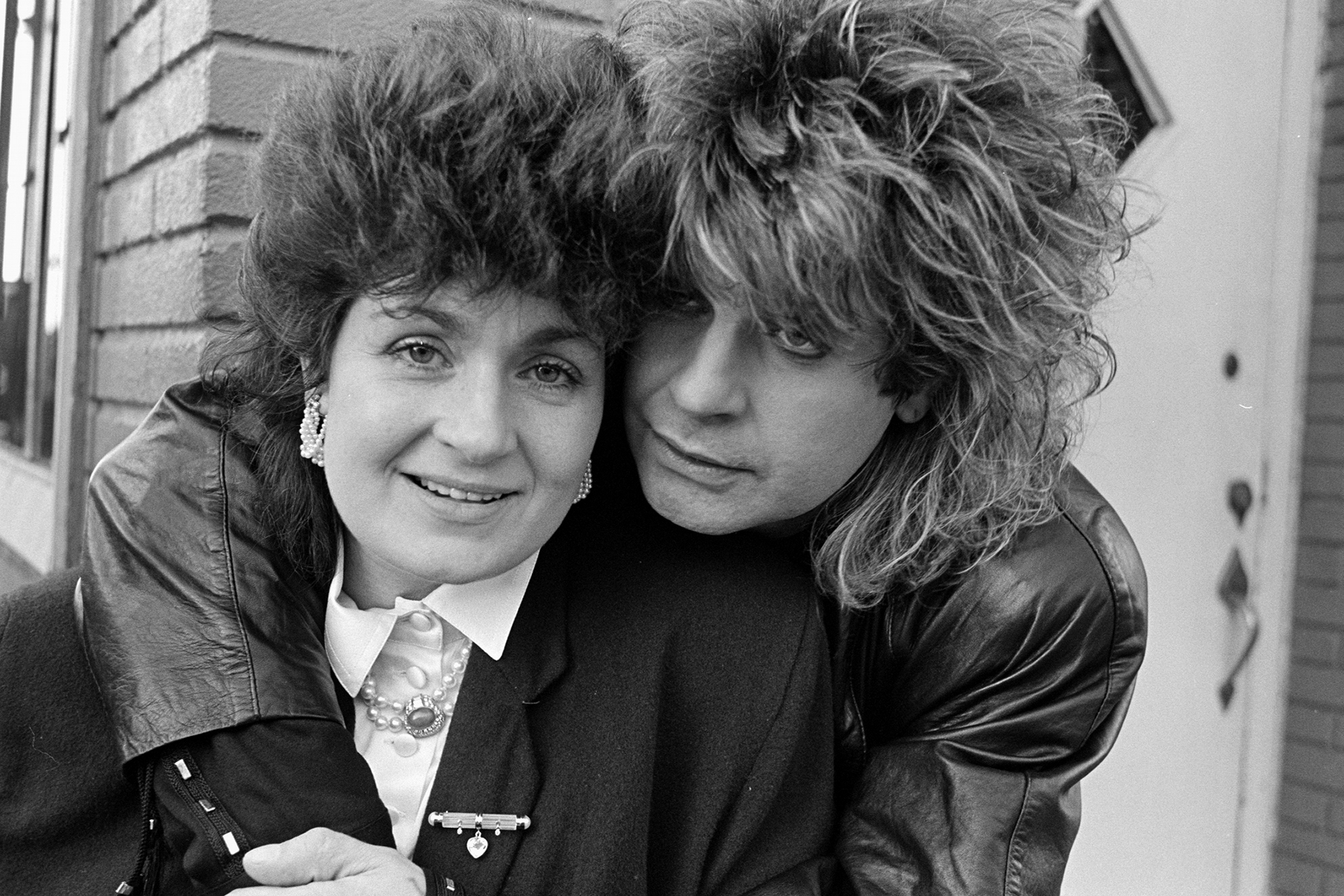 “There were times when I was on the floor crying and shaking,” she told the Daily Mail, “because he’d threatened to come over to the house and kill me.”

But she took what she learned from her dad and applied it to her own career. In time, according to Don Arden’s biographer Mick Wall, Sharon turned out to be “Don in a skirt. You don’t want to f—k with her.”

“The music business in those days was a boys club, fueled by cocaine and sexual favors,” Sharon wrote in “Extreme.” She added: “These were the days of payola and Mafia involvement and the standard currency, if you were a woman, was a blow job but men soon learned that Sharon Arden was more likely to kick them in the balls than suck their d–ks.”

The one guy she could never really control, however, was Ozzy, whom she married after starting an affair with him when he was still married to his first wife, the mother of his two oldest children.

Ozzy celebrated the birth of his and Sharon’s son, Jack, by being drunk during the delivery and then going home and having sex with one of the nannies. Another time, Sharon wrote in her book, he hit her “very badly” while she was breastfeeding Jack.

“But we got over that, we always did,” Sharon wrote, while admitting she was often violent with Ozzy, too.

(Sharon was pregnant with a fourth child in the early ’80s when her mother’s two dogs attacked her, causing her to miscarry.) 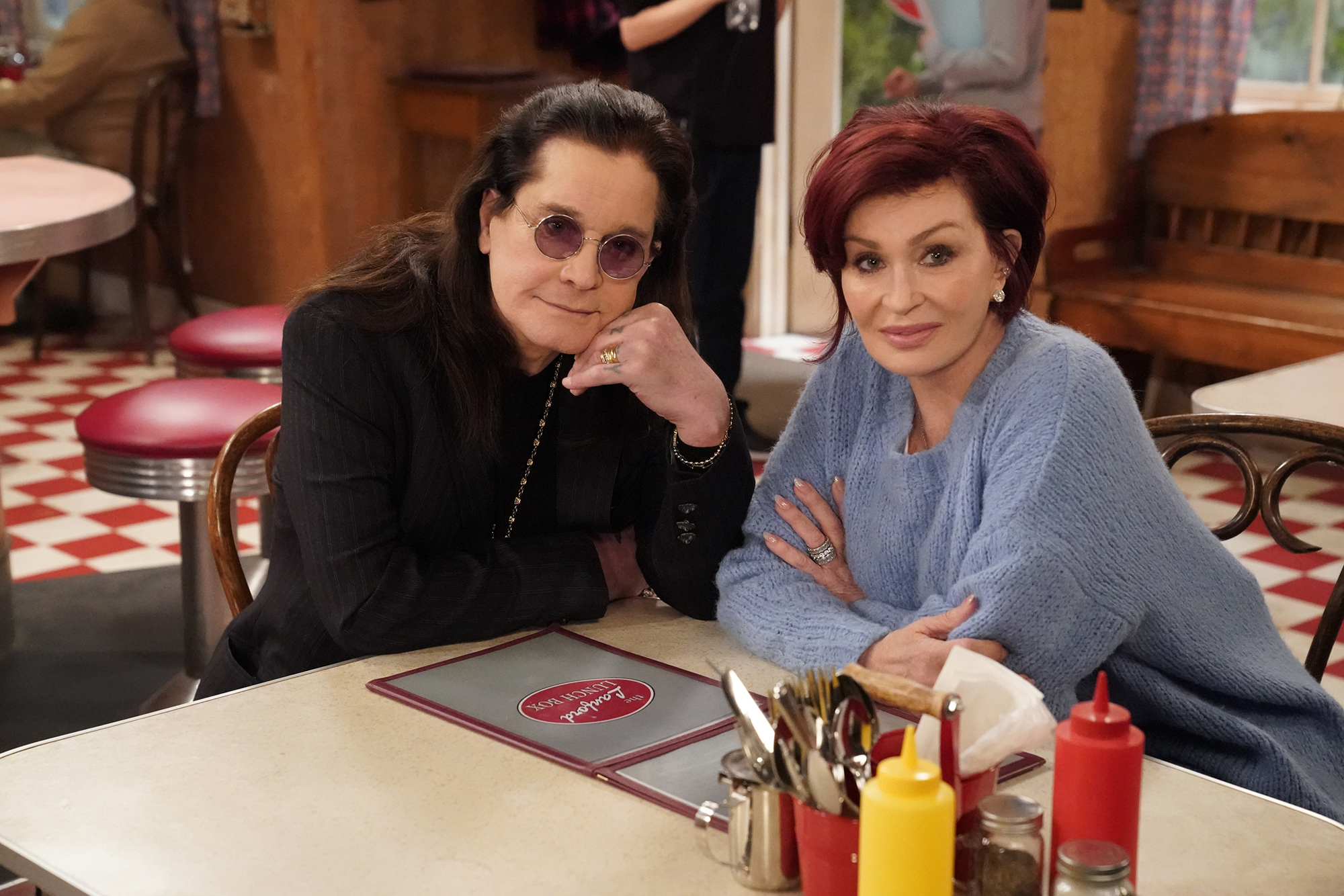 She also built up his career — and tried to tear down others. After Ozzy was rejected from Lollapalooza in the 1990s for being “uncool,” Sharon put together Ozzfest, a traveling festival of metal bands headlined by her husband.

Sharon the behind-the-scenes kingmaker got her own improbable shot at the limelight with MTV’s reality show “The Osbournes,” starring her and Ozzy and two of their three kids, in 2002 — and ran with it. The show became MTV’s most watched series, and Sharon a household name.

Once on the show, when she was tired of hearing her neighbors’ folk music, she threw a ham at their house. Another time, she complained about how much she hated housework and said: “Martha Stewart can lick my scrotum.” Much of what she said was so full of cursing it ended up being bleeped out.

“The Osbournes” ran until 2005 but Sharon has been on TV ever since. She was a judge and mentor on the UK version of “The X Factor” from 2004 to 2007 and later joined “America’s Got Talent.” She was also a contestant on “Celebrity Apprentice.”

When she took exception with something Iron Maiden singer Bruce Dickinson said about the TV show, she sought Sharon-style revenge: messing with Iron Maiden’s PA system during an Ozzfest show, throwing eggs, encouraging the crowd to toss bottles, and pulling the plug during the band’s set.

She thinks she’s in a hostile environment? She should have known Sharon in the ’80s!

Still, Rod MacSween, the veteran agent who reps The Who, Aerosmith and Pearl Jam, among others, told The Post that he’s known Osbourne for 40 years and has never seen any evidence of racist behavior from her.

“I don’t think she deserves this,” MacSween said. “Not only has she been a pioneering woman in the music business who’s championed other women, she’s also the daughter of a Jewish father and a Catholic mother. She understands prejudice. I’ve never seen it from her.”

“She loves what she does and what’s more, the network hired her for ‘The Talk’ because she is outspoken and brash and brings the drama,” a source close to both Sharon and the show told The Post. “What’s happened is they set Sharon up to stir the pot a little, and it spiraled out of control.”

The source, who was on set March 10, told The Post that the original segment was supposed to be just four minutes but it ran much longer.

“Sharon was having a nervous breakdown up there on TV and everyone could see it,” the source said. “The crew loves her and couldn’t understand why no one — not the show executives or the people in the booth — tried to help her and just end it. They just hung her out to dry. It got unnecessarily ugly.”