Despite the rescue packages, the campaigns and open letters, this leaden age of spreading, rolling lockdowns, of multiplying cancellations and venue-killing capacity caps, has changed the atmosphere.

There is a loss of hope. The industry is thinning out, top to bottom, as lifelong dreams are crushed and abandoned, with few opportunities left to look forward to on the calendar.

The Age spoke with five performers, with a cross-section of careers no longer just on hold, but under existential threat.

She was Australia’s first Elphaba in Wicked, one of the hottest roles in musical theatre, one of its most sought-after talents, a West End regular. Harrison sobs over Zoom from her Melbourne bedroom as she explains why she gave up auditions and retrained as a real estate agent.

“We’ve got two kids. I’ve got a teenage daughter. They just eat a lot, you know what I mean?”

Her husband, a head mech on musicals, lost his job on Billy Elliot when COVID hit. Harrison had $30,000 worth of cruises, voice-overs, bits and pieces cancelled. JobSeeker wasn’t enough, and their savings evaporated. 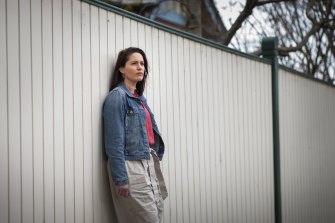 “The panic and the fear set in,” she says. “And we didn’t see that ending.” Harrison did a real estate course, worked some contacts, found a great job.

“I actually feel like a bit of a traitor. Last night I saw this video of a theatre opening up in New York and they’re all screaming and laughing and crying and I just lost it.”

Her husband has a new job on Moulin Rouge but the show hasn’t yet opened and she has to keep spruiking housing. “I don’t have a choice.”

She’s not attracted to teaching work. What would she tell performing arts students? “How can you tell them that this is a path for you? So the hope and joy in it, you can’t even pass it on anymore.”

She watches the other agents, their joy and passion in listing a property, in selling it. She wishes she could share that.

“But this does not feel anything like the major moments I’ve had in my life. I’ve sung on the Opera House stage. I’ve sung at Carnegie Hall. I was f—ing Elphaba in Wicked! And I think, wow, am I ever going to be able to feel that again? And it’s very, very sad.”

The actor, singer, comedian and writer, one of Australia’s best-loved leading ladies, took it hard when she heard that Harrison and another of her favourite actors, Michelle Doake, had left their careers for real estate.

“I felt so sick that this industry could lose two of their absolute best women,” she says.

“I’m now on anti-depressants. I’ve never ever been on anti-depressants in my whole life but I couldn’t continue. The knocks were just so bad. I was on the kitchen floor crying too often and my partner finally just said ‘you’ve got to do something’. 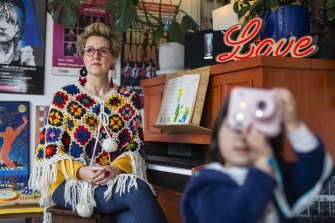 “I couldn’t sleep, my head was going, ’you’re not going to survive this time, this is the time you’re actually going to lose your house. You’ve got a young child. Chat chat chat. The medication has allowed me to actually get rid of that chat … to use my skills.”

It looks like she won’t be able to use the $10,000 US visa she bought at the start of 2020 for a tour. A production of rock musical Next to Normal set to open at Chapel Off Chapel: gone. She tried to run teaching classes online but “they were horrific so I didn’t run them again… I felt like I had nothing to offer anyone”.

The knocks were just so bad. I was on the kitchen floor crying too often.

“Artists are incredibly resilient people. We are very used to pivoting, we have the ability to come up with ideas from absolutely nothing, and to rise from the ashes. But … we’re exhausted. Exhausted from doing that.“

She feels the performing arts have been “put in the too-hard basket”: bars can reopen, but not theatre bars; sporting teams can train and play, but actors can’t rehearse or perform.

“It just makes you want to explode.”

The star performer had been workshopping a new musical called Becoming Nancy in New York. It was to be his Broadway debut. Then COVID-19 hit: there was a rush to get the family home to Melbourne. The apartment in Brooklyn still has their clothes hanging in the wardrobe.

“The big thing for me was potentially losing that lifelong dream after having it pretty much at my fingertips. It is heartbreaking,” he says

And now another blow: his role in Victorian Opera’s production of Tommy is another lockdown casualty. They’re struggling to sublet the Brooklyn place, trying to support two homes across the globe, with limited options to make ends meet.

“There’s just a lack of hope,” he says. “The one thing that resilient performers have is that they can always say ‘you know what if I work really hard, if I just collect my thoughts and take a breath, I can always trust that I’ve got the work ethic that’s going to get me through’.”

But there just aren’t opportunities to chase. 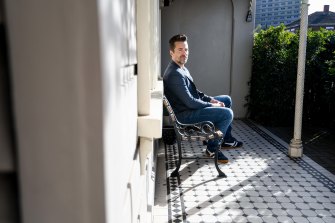 “I oscillate from going ‘well, it’s a pandemic you know, it’s really bad for everyone. We’ll be right.’ … And then I find that other times I’m just lost for answers, I find myself waking up in the middle of the night just so stressed with not knowing what the f–k to do [to] get the money that is needed just to pay the basic bills. To be able to trust that I’ll be in a headspace that’s even vaguely acceptable for me as an adult to be a good parent, a good friend, a good husband.”

Despite losing $100,000 worth of work he didn’t qualify for JobKeeper. He found JobSeeker soul-destroying.

“My job application letter was ‘Hi my name is Matthew, I’m an actor and a singer. I can’t do anything else except act and sing, but I’m really good at it and I’d like to get a job in your business.’”

A JobSeeker algorithm told him to apply for a job as a theatre technician. At a surgical theatre. He laughs bitterly.

“I just imagined myself like Patch Adams, turning up at The Alfred with my white coat on saying ‘here I am, I’m here for your surgery!’”

The cabaret and musical theatre veteran puts it succinctly, angrily: “I just want respect. R.E.S.P.E.C.T. Find out what it means to me. I’m over it.”

He’s ok. Not great, but he’s ok, thanks to his assertive accountant who nagged him repeatedly to register as a business to qualify for a broader range of supports.

“After panicking and thinking it’s all over and I’m gonna end up living in a tent on the street, he got me on it and I was fine. I could exist on it.” 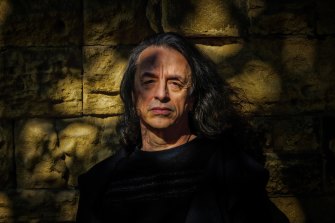 But he lost all his work for 2020, which had been shaping up to be his busiest in a decade. This year, again, most things are cancelled (or postponed, which amounts to the same thing when you have to pay the bills).

Another major blow a few weeks ago: an email from his agent. “Because of COVID, because of what happened in 2020, he’d made the decision to leave the industry. He doesn’t know what he’s doing but he doesn’t want to be in the industry any more.”

He knows of lighting and sound technicians, set builders doing the same thing. Generations of talent leaving. Queenie adds she’s heard of a “very well-known director” who quit to study to be a psychologist.

“I hope it’s temporary,” Capsis says. “But I don’t believe we’re going to go back to how things were, really.”

The 30-year-old musician and opera singer, a young Indigenous star at Deborah Cheetham’s Short Black Opera, comes across as a bubbling spring of energy and drive. Looks can be deceiving.

“I stopped watching the news because I just am so depressed,” she says. “Every day more cases, which means more people are cancelling things or rescheduling. I don’t know if I can continue to [work]. I want to. I love singing, I love performing, but it’s becoming really difficult to maintain a life.”

There are so few opportunities at the moment, she says: producers are gun-shy after so many lockdown cancellations, with no insurance or government guarantees to absorb the financial hit.

Her emotional coping strategies include rearranging the furniture. On her down days “I’m just crying all day, and I just really have to let myself do that and not be productive for two days.”

The tour off the back of her first album was cut short by the pandemic. A role in Cheetham’s Pecan Summer, gone. Another tour, pencilled into late 2021, looking shaky. 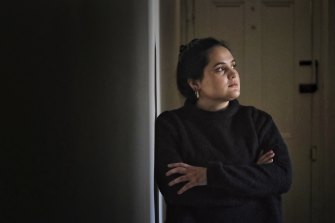 She tried the online pivot but there’s not much money in singing to a camera in your bedroom. And anyway, she hates it. “Performing to a computer screen is so soulless. I have realised that a lot of my creativity, a lot of my drive came from performing live with other people.

“When it suddenly turned from being onstage and feeling the energy of 1000 people in front of you, to having no reaction except a couple of little things popping up on my screen… I started saying no to them because I was crushed, this is not good for me.

I love singing, I love performing, but it’s becoming really difficult to maintain a life.

”I’m in the process of writing a new album at the moment and it’s been really difficult … I haven’t felt motivated, I’m like, ‘what, I’m spending all this money on this album that I’ve been working towards basically my whole life and now what is the point of this?’ I’m just going to release this music, [but] not be able to [perform] it?“

After a decade of work she fears her career is disintegrating.

“I might need to go and get a job at a café,” she says. “I don’t feel equipped to leave the arts industry and go and work somewhere else. I’m looking at these positions going, I don’t have any specific set of talents.”

In need of some good news? The Greater Good newsletter delivers stories to your inbox to brighten your outlook. Sign up here.