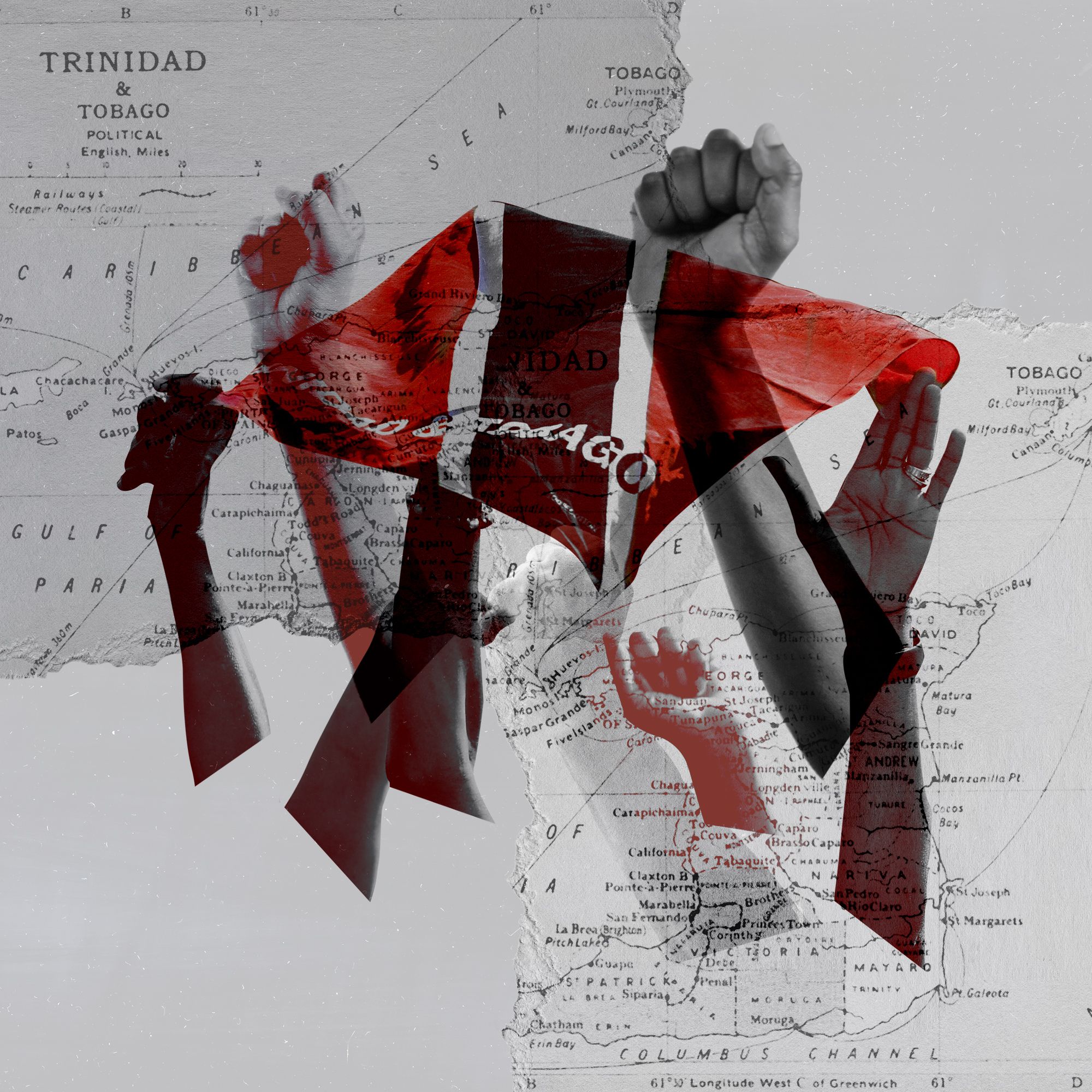 I stood before our office’s massive glass windows, a panoramic view of Port of Spain spread before me. Above it rose a thickening plume of smoke. This was June 2020, roughly a month after George Floyd was killed by Minneapolis police. If Floyd’s death was a rallying call, my country—Trinidad and Tobago, a former British colony—heard it. I’d attended one of these protests, a knee resting in the damp grass opposite the U.S. Embassy. We kept our indignation to a low simmer. We wore masks and stood three feet away from each other. The police officers present kept a respectful, bemused distance.

If Floyd’s death was a rallying call, Trinidad and Tobago heard it.

What I saw in that window felt like something else entirely. After the protest I joined, still at the height of what the world saw as a global racial reckoning, Trinidad and Tobago police killed three Black men. Joel Jacobs, Noel Diamond, and Israel Clinton were shot in Morvant, a community deemed a crime hot spot—which is also broadly housed within a region forming a cradle of Black culture in Trinidad, birthing one of the country’s proudest offerings, the steelpan. Videos of the killing went viral, challenging the police’s claims of a mutually participatory shootout. The largely Black residents of Morvant and its surrounding communities took to the streets, burning debris and blocking major traffic routes as they explained their frustrations. “They protesting in America and they killing we here in Trinidad?” a resident shouted to the eager cameras.

What I saw in that window felt like something else entirely.

Earlier that month, Trinidad’s commissioner of police, Gary Griffith—himself criticized for referring to criminals as “cockroaches”—insisted that his police were not capable of racism. “I have 10,000-odd police officers and guess what? None of them are white,” he was reported as saying. Later, when I saw an image of a masked Trinidadian officer stepping on the neck of a Black protester in a gesture so absurdly similar to the one that ended Floyd’s life, I kept Griffith’s words in mind. They haven’t left.

Trinidad and Tobago, known for its Carnival and sunny beaches, is a compelling study of colonialism’s enduring psychological wounds. Trinidad was invaded by the British in 1797. Tobago, a nearby island, was annexed to Trinidad in the late 1800s. British rule in Trinidad and Tobago shared characteristics with other countries also owned by the crown, including a political system that stripped most of the country’s population of their rights and humanity, policing that preserved white people’s positions at the top of the race-class pyramid, and a primary aim of extraction that molded the country into a plantocracy. The queen would be removed as head of state only in 1976 when the twin-island nation became a republic.

Trinidad and Tobago is a compelling study of colonialism’s enduring psychological wounds.

For more than a century, Britain transposed its own ideas of racial purity, comportment, language, society, and culture, systematically dissolving and criminalizing ways of life enjoyed by Black people in Trinidad and Tobago. That a Carnival even exists in its current iteration is proof of the perseverance of the descendants of slaves, who fought against the British police’s attempts to quash their celebrations in 1881. Incidentally, this confrontation happened in close proximity to the area in which the three Black men were shot. And when, this year, our government announced that the historic festival would be canceled due to the pandemic, observers noted that the language used by superintendent Roger Alexander to caution against reckless revelry seemed to nod to colonial times past. “First of all, the GEB [Guard and Emergency Branch] intend to move with full arms, tasers, rubber bullet, tear gas, handcuff, batons and weapons,” the cohost of a popular cop show confirmed. “Sometimes you have no choice but to force compliance.”

After slavery, British planters lured Indian indentured laborers to Trinidad and Tobago to replace the free labor it had lost. Today, Indo-Trinidadians—themselves descended from a population also culturally victimized by British rule—form our country’s majority alongside Afro-Trinidadians. Eventually, political leaders would emerge who were representative of these two ethnic groups, forming separate parties that alternated governance of a country also inhabited by descendants of Europeans of various nationalities, South Americans, other Caribbean immigrants, Chinese, Syrian, Lebanese, and Indigenous folks, among others.

I found my own Trinidadian upbringing confusing

Last year’s elections either revived historic racial tensions between the two political parties or showed how Trumpian rhetoric had emboldened them, with the United National Congress—the party associated with the island’s Indo-Trinidadian population—criticized for relying on racist tropes to gain votes, curiously showing the same population of Black people it presumably intended to woo as poor, disheveled, and in need of saving. One of its videos even featured a version of a pickaninny.

I found my own Trinidadian upbringing confusing. On one hand, I was made to believe that race mattered very little, echoing sentiments of postraciality that surfaced after President Barack Obama was elected. My schoolbooks emphasized that Trinidad and Tobago was a rainbow utopia, evident by the shoehorning of as many creeds and races as could possibly fit into small, grayscale pictorial representations. I’d look at my face in the mirror—my light but definitely brown skin, my broad nose—clocking my features against the fact that my last name was confusingly Chinese (my great-grandfather on my dad’s side came from there) and wondering what the hell I was.

I was Black when I traveled, a fact made clear to me on my first-ever trip to America when I was seven. But when I was home, in a society that was mostly Black and Brown anyway, I could just be Trinidadian. My mixedness represented a kind of ideal amalgamation that fit neatly into the nationalist narrative our country’s first prime minister proposed—himself a Black firebrand who stated in one breath that “Massa day done,” but in another, “There can be no Mother India for those whose ancestors came from India. There can be no Mother Africa for those of African origin. … A nation, like an individual, can have only one Mother.”

I never considered my Blackness because I knew what kinds of trauma my light skin exempted me from.

On the other hand, I was made to believe that race mattered very much. I never considered my Blackness, because I knew, deep down and even as a child, what kinds of trauma my light skin exempted me from. I desperately wanted to be white, not just to look it but to feel it, to feel as though I was popular at school, as though I was special, as though I could vacation overseas whenever I wanted. My “diverse” and private Catholic school made that abundantly clear, in which we were told once that if we failed our exams, we would be accepted to only those high schools—coded language for schools that were typically all-Black and largely neglected.

Theorists speak of decolonization as a process involving a reordering of our society and culture according to Indigenous worldviews. But even before this, even before Trinidad and Tobago can reach consensus on what indigeneity means to such a confluence of people, its most powerful must reflect on the wrongness of a system that while wreaking psychological havoc below, still graciously sees white and lighter-skinned people sitting on thrones that have simply switched hands.