The southern greater glider has been made endangered in NSW due to climate change, bushfires and native logging severely reducing its population and habitat, the latest in a rapidly growing list following back-to-back natural disasters.

WWF Australia conservation scientist Stuart Blanch said while the science was clear on what needed to be done to conserve threatened species, the political will made the issue more complex.

He said while other countries, including the US and China, have shown strong laws and long-term investment can help endangered species recover, in Australia the list continues to grow. 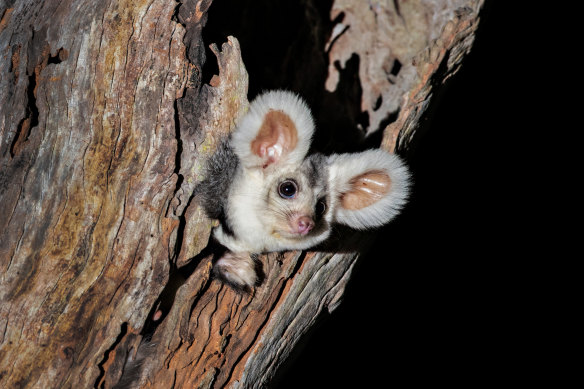 The greater glider, once common across the eastern seaboard, is now endangered.Credit:Josh Bowell.

This trend would continue until stronger action was taken to stop deforestation and native logging – two of the biggest drivers in habitat destruction. He added there also needed to be greater incentives for farmers to protect forests, providing an economic alternative to logging.

“It’s not rocket science. When we do that, animal numbers build up again,” he said.

While the southern greater glider’s population is rapidly declining in some areas, including the Blue Mountains, it has completely disappeared in others, including the Booderee National Park at Jervis Bay on the South Coast where it has not been recorded since 2006.

The mammals were upgraded from vulnerable to endangered by the federal government this year, with the NSW Threatened Species Scientific Committee’s latest upgrade ensuring national standardisation with the Commonwealth.

In its decision, the committee cited land clearing, bushfire, climate change and forestry activities as key drivers in the mammals’ decline.

There are three species of greater gliders, but the southern one lives in NSW and Victoria’s eastern forests. It is the largest of the family with a head and body length of 35 to 46 centimetres, a tail length of 45 to 60 centimetres and weighing up to 1.7 kilograms.

Australian National University ecologist David Lindenmayer said scientists have known this was the most likely outcome for the mammal for the past ten years, but inadequate plans to end native forestry and poor environmental laws have led to its demise.

“We have known for the past 10 years some drivers of the greater gliders’ decline,” he said. “When I was young it was the most common animal we would see when we were spotlighting, you’d see 30 to 40 animals in NSW and Victoria.”

He added that if Australia was going to slow the rate of greater gliders’ decline, stronger environmental laws were needed as well as an immediate end to native forest logging. Doing so would also help the country achieve its 2030 emission reduction goals.

Lindenmayer said Australia had the worst mammal extinction record in the world, with the country pushing three species to extinction in the past decade. Since colonisation, about 100 of Australia’s unique flora and fauna species have been wiped off the planet. The rate of loss, which is as comprehensive as anywhere else on Earth, has not slowed over the past 200 years.

Australia has around 2000 flora and fauna species on the threatened list, which means they are at elevated risk of extinction. There are now more foreign plant species than natives growing wild and in the past five years, 17 mammal species were either added to the endangered list or upgraded to the critically endangered list, as well as 17 birds and 19 frogs.

Federal Environment Minister Tanya Plibersek said this year that the country’s approach to conservation was not working and made the ambitious promise that no more extinctions would come under her watch.

NSW Agriculture Minister Dugald Saunders said state forests made up less than 10 per cent of forested land in NSW, with about half of that area set aside for conservation.

“Importantly, in every tree harvesting operation, strict conditions are applied that were developed by expert scientific panels to protect the habitat of species such as the Greater Glider.”

Saunders did not comment on whether an end to native forest logging would be considered for NSW. Victoria and Western Australia have already set end dates.

Get to the heart of what’s happening with climate change and the environment. Our fortnightly Environment newsletter brings you the news, the issues and the solutions. Sign up here.