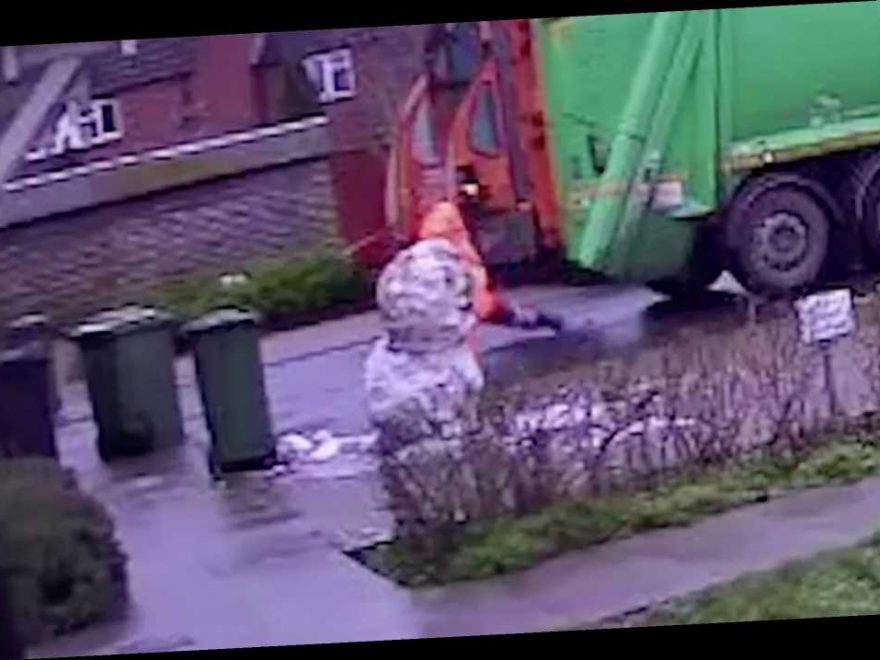 A garbage man in England has been fired after getting caught on camera going Kung-fu on a family’s sidewalk snowman.

Footage shows the orange-uniformed trash worker delivering a half-dozen kicks — including some Bruce Lee-worthy roundhouses — to the six-foot snowman, decapitating the construction and ultimately reducing it to half its former stature.

The snowman had been built by neighborhood kids in Hereford — a cathedral town near the Welsh border — after a recent blizzard, homeowner Sophie Taylor, 25, told the Herefordtimes.com.

Taylor said her three-year-old son, Joseph, always waves to the trash haulers each week through the window.

And then “he goes and does that in front of his face,” she complained of the worker, who was fired by his company..

Joseph saw the destruction through the window and was reduced to tears, the mother told The Mirror.

“On Tuesday he came running to me in tears sobbing, ‘The binman has broken my snowman’ and he started doing a kicking motion.”

Meanwhile, the so-called binman has told The Mirror that he’ll build the kid another snowman, if the family wants, but that he is “not sorry.”

“I don’t think I have to say I’m sorry. His family knew it was not going to be there forever,” Callum Woodhouse, 19, told the outlet.

Besides, the snowman had it coming, Woodhouse said, claiming it “was obstructing my path.”

‘I decided to kick it because I didn’t think it was going to hurt anyone’s feelings. I don’t think that snowmen have feelings,” cracked Woodhouse, who told the Mirror he is an expectant father.

“It was going to melt and snow again. I didn’t think it would make such an impact on a three-year-old kid.”

Video of the unprovoked snowman assault has gone viral in the UK, spurring intense arguments online over whether the “refuse operative” should have been “sacked” for destroying the snowman “whilst on duty.”

“This obviously has shown his character,” complained @BarbsK5. “Would you employ him?”