A set of “fake unions” with links to current and former Liberal and National party figures are capitalising on anti-vaccination fears to recruit doctors, teachers and nurses and exploit dissent within the labour movement about mandatory vaccinations.

Queensland-based Red Union claims nurses from Victoria and NSW are flocking to join its associations, which it says are adding more than 200 members a day amid fears of vaccination orders. In NSW, Liberal Party member John Larter is setting up three workers’ associations to compete with established unions for allied health, policing and paramedics. 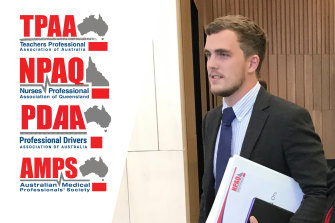 Red Union director Jack McGuire will not say whether the associations are for or against coronavirus vaccines, instead saying they want to uphold the law and represent their members.

Mr Larter, a paramedic who was suspended from work after expressing views on vaccination and the pandemic, argues existing unions have abandoned their members by not fighting against public health vaccination orders designed to keep Australians safe from the coronavirus.

None of the new associations challenging vaccination rates are registered as traditional trade unions, which means they lack the same powers to represent workers but they avoid strict oversight from industrial regulators.

The Queensland associations, which operate under the umbrella organisation Red Union Support Hub, began with the Nurses Professional Association of Queensland in 2014. Several of its leaders have previously held positions within the LNP or been members of the party.

Two of the associations, for nurses and doctors, have started a fundraiser online to fund legal challenges to vaccine mandates that has taken in more than $26,000 in donations.

“We are opposed to the mandate for the COVID-19 vaccinations and believe that nurses are medical professionals and are far more capable than politicians, bureaucrats, and so-called public health officials of making informed medical decisions relating to their own bodies and how they will protect their patients,” the Red Union-run fundraiser says.

Australian Council of Trade Unions secretary Sally McManus has warned people to be careful of the organisations.

“These are fake unions run by LNP members and their associates set up to try and divide working people,” Ms McManus told The Sydney Morning Herald and The Age. “This amounts to an LNP-sponsored anti-vaccination campaign which will directly and needlessly cause working people to contract a deadly virus.” 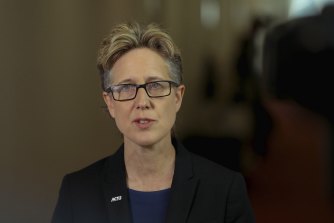 States and territories including NSW, Victoria and Queensland have increasingly employed vaccine mandates for essential personnel such as aged care workers, healthcare staff and police to keep those people, and the often vulnerable Australians they interact with, healthy.

The mandates have prompted intense public debate, with health experts such as Sydney University professor Julie Leask cautioning that mandates should only be used as a last resort because of supply issues and the risk of polarising people on the issue.

Although Red Union does not broadcast a blatant anti-vaccine message, its leaders have repeatedly cast doubt on coronavirus vaccines by emphasising that they are in a “trial stage” and saying “further testing needs to happen”.

In a video shared by the Nurses Professional Association of Queensland online, a registered nurse, who said she would have to leave the profession because she did not want to get vaccinated, claimed COVID-19 jabs did not work.

Her claims are not backed by any health authority in Australia.

Red Union director Jack McGuire said he was not responsible for social media posts but conceded the nurse’s claim that vaccines did not work to prevent illness was wrong.

Gerard Hayes, the national president of the Health Services Union that represents tens of thousands of workers nationwide, accused the new associations of grandstanding on vaccines in an attempt to gather attention while hiding their political connections.

“It’s cowardly and it exemplifies everything you wouldn’t want to do as an industrial body,” Mr Hayes said. “An industrial body that stands up and fights for its members doesn’t do it under a disguise.”

He said members should listen to the experts on vaccination. “I think these guys should fly in a plane where the pilot picked up his licence on YouTube or some kind of social media channel,” Mr Hayes said. “It doesn’t take all that much experience to be experts in bulls–t. Any moron can do that.”

Mr McGuire refused to say whether the Red Union associations were for or against coronavirus vaccination, instead arguing the associations represented their members’ views.

“We have a more of an individualised approach rather than just these broad sweeping statements,” Mr McGuire said.

Australia’s medical authorities from the chief medical officer down have repeatedly reassured Australians that the coronavirus vaccines being used here are safe, effective and have been thoroughly tested here and overseas.

Chris Moy, the vice-president of the Australian Medical Association, said employers should have a right to dismiss healthcare workers who refused vaccination because COVID-19 vaccines reduced transmission of the virus that could kill patients.

He said Red Union’s decision to use names for their organisations similar to the legitimate representative bodies for those workers “indicates the level of respect they should be given”.

Overwhelmingly, Australians have supported vaccinations. About 90 per cent of nurses have been vaccinated in Queensland and aged care staff are also almost 100 per cent jabbed after state and territory governments introduced mandates nationwide.

But Mr McGuire dismissed Ms McManus’ criticism, saying the established union movement was letting its members down by not challenging vaccination mandates. He said associations linked to Red Union were entitled to call themselves unions because they dealt with issues such as unfair dismissal and pay negotiations on behalf of their members.

The use of the term “union” is not restricted by law but earlier this year the Queensland Industrial Relations Commission found the Nurses Professional Association of Queensland was not an industrial association or a trade union under state law. The ruling is being appealed.

Red Union says there has not been sufficient consultation with workers by health authorities about vaccine mandates. They argue it would be easier to keep COVID-19 from spreading in workplaces by widespread rapid antigen testing.

The strategy has been hugely successful for the Red Union associations, which now claim more than 10,000 fee-paying members, with more than 200 people signing up each day, mostly among nurses. It is still a tiny number compared to the Australian Nursing and Midwifery Federation, the largest union in the country with more than 280,000 members.

“Over the weekend, we were being inundated by nurses in Victoria and in NSW because their unions were not supporting them and they wanted somewhere to go,” said Mr McGuire on a live stream with LNP MP George Christensen on September 27.

Mr McGuire was speaking after days of ugly protests by construction workers in Melbourne angry at mandates and days before healthcare staff in NSW and Queensland are legally required to have their first COVID-19 vaccine dose.

Unlike the Red Union associations, most of the labour movement supports vaccination mandates backed by public health experts on the basis that they are best placed to assess the risks and benefits of Australia’s safe and effective vaccines. They oppose mandates from individual employers.

“We cannot be distracted by other agendas – vaccination is the key to overcoming this pandemic,” said Queensland Nurses and Midwives Union secretary Beth Mohle in a statement.

In NSW, Mr Larter has started a string of organisations similar to the Red Union associations in the past month. They are the NSW Paramedics Association, with more than 100 members, the NSW Allied Health Association, now approaching 600, and another for police in a nascent stage, none of which have much more presence than a Google form to join and posts on Mr Larter’s social media.

“We feel that the union movements have essentially abandoned the grassroot customers,” he said. “They’re not speaking up.” 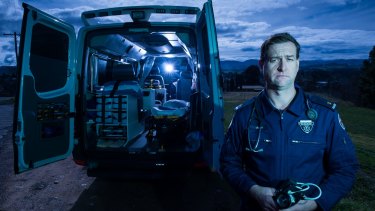 Mr Larter, who is a Liberal Party member, deputy mayor of the Snowy Valleys Council and has been an active Australian Paramedics Association NSW member, hopes the new organisations will help provide plaintiffs in the case he has launched challenging the NSW government’s vaccination mandate for paramedics. That case is before the Supreme Court.

He claims the number of injuries caused by COVID-19 vaccines are under-reported, suggests vaccines may come from aborted fetal cells, and wants to know if they could cause changes in recipients’ DNA.

The NSW Paramedicine Council suspended Mr Larter’s registration on September 20, after he began expressing his views on vaccines and the pandemic. In a statement, a council spokeswoman said confidentiality provisions prevented it from saying why Mr Larter had been suspended but noted suspensions are allowed for the “protection of the health or safety of the public and … public interest”.

Mr Larter plans to challenge that and believes he is not anti-vaccine.

“I’m not deterring anyone from having it,” Mr Larter said. “All I’m saying is it’s a personal choice.”

Mr Larter, who is very critical of the Berejiklian government, said his associations had no ties to the Liberal Party.

Many private-sector unions are affiliated to the Labor Party, but public-sector unions such as the nurses are not, though they may campaign on policies or issues that they believe will benefit their members and are backed by Labor.

Although Red Union does have some nurses in leadership roles in its nurses’ group, many of its most senior figures have ties to the Liberal National Party. The Nurses Professional Association of Queensland was founded by Graeme Haycroft, a former labour-hire firm operator who has boasted of battling the shearers’ union, established union-free construction sites in Queensland and was chair of the Liberal National Party’s industrial relations committee. 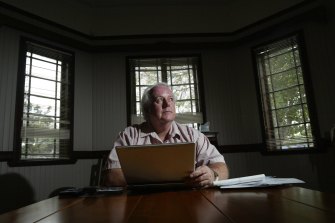 Graeme Haycroft, who founded the Nurses Professional Association of Queensland, was a chair of the Queensland Liberal National Party’s industrial relations committee.Credit:Jason Weeding

Mr McGuire, the Red Union director, is also the secretary of the Teachers Professional Association of Australia. He was formerly president of the Queensland University of Technology Liberal National Club but says he has quit the LNP because he was “filthy” that it was not properly representing blue-collar workers.

He said the Red Union associations contained people with a range of political opinions, including Labor supporters, and its associations were bound by constitutions preventing them from offering financial or in-kind support to any political party.

The Nurses Professional Association of Queensland secretary is Aenghas Hopkinson-Pearson, who was thanked by LNP education spokesman Christian Rowan in a speech last year for his work as the party’s state electorate council treasurer in Dr Rowan’s Queensland state seat of Moggill.

Whatever the background of the Red Union leaders, they are recruiting members who would otherwise likely be paying dues to a traditional union but feel alienated by their stance on vaccines. Ms McManus, the ACTU boss, is not for turning.

“The Australian union movement is fighting to keep working people safe and to stop misinformation which will cost working people their health and their lives,” she said.

Stay across the most crucial developments related to the pandemic with the Coronavirus Update. Sign up for the weekly newsletter.