Defence Minister Peter Dutton has backed a climate target of net zero emissions by 2050 in a sign of majority cabinet support for the goal as the federal government waits on the Nationals to decide their stance this Sunday.

Mr Dutton said he wanted to see more electric vehicles and more renewable energy to help Australia cuts its emissions in a way that did not damage industry, but he also said the Nationals should be given time to discuss whether they could accept the goal. 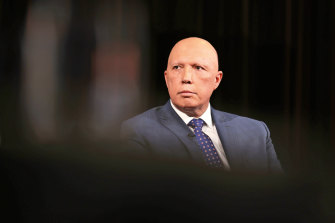 “From my perspective, I want net zero by 2050, but I want to do it – particularly from a state perspective like mine – where we can have certainty for those communities,” Mr Dutton, the Liberal Party’s most senior Queensland cabinet minister, told the Nine Network on Friday morning.

The comments came as Nationals leader and Deputy Prime Minister Barnaby Joyce sent another warning about his concern in a Facebook post that said the party was “exceptionally cautious” but did not say whether it could accept the net zero target or not.

Prime Minister Scott Morrison discussed a new climate package with federal cabinet ministers on Wednesday, but a final cabinet decision on net zero is not expected until after the Nationals meet on Sunday, clearing the way for a Coalition party room discussion on Tuesday.

Mr Dutton said the Nationals had to discuss the impact on regional communities.

“We will get the balance right. I think we can arrive at an agreement and this will happen over the next few days but I think it’s incredibly important that the Nats are allowed to have their party room [meeting], to discuss it, to air all of these issues.”

Mr Dutton accused Labor of sending mixed signals by saying one thing to voters in the cities and another to regional voters worried about the loss of coal exports, but he made it clear he was one of the voices in favour of net zero in federal cabinet.

“We want to see electric vehicles, we want to see renewables. We want to see industries that are sustainable, we don’t want to destroy jobs and our economy, which is what Labor is promising to do at the moment,” he said.

Labor deputy leader Richard Marles said the government had stalled on climate action for years and was now waiting on the Nationals to decide its policy.

“We need to be thinking about the jobs that we are going to lose if we don’t take up the opportunity of really developing renewable energy,” Mr Marles said, in his weekly appearance on Nine with Mr Dutton.

“We need to be thinking about the warnings that have been given to us about how a global economy will penalise us if we don’t move down the path of zero net emissions by 2050, and what means in terms of jobs right across the country.

“This shouldn’t be anywhere near as hard as it is. And it’s because the government’s party room is in complete disarray and, at the end of the day, that is a function of Scott Morrison’s utter inability to lead.”

Mr Joyce said the regions had done more than the cities in cutting emissions so far and this meant it was time for the cities to do more of the work.

“If policy wants to shut down capital city lifestyles by removing cars from the road or turning off air conditioners, then that is a choice for capital city politicians to offer them,” he wrote on Facebook.

“But, if what is asked once more is for the regional areas to fulfil capital city climate policy prerogatives, to feel good about a sacrifice they didn’t actually make, then what other option do we have than extreme caution wrapped in cynicism.”

Federal statistics show emissions have fallen 20.8 per cent since 2005 but that much of this is from land use change in regional Australia, prompting Deputy Nationals leader and Agriculture Minister David Littleproud to warn that farmers could not do as much again.

Repeating a strong concern among the Nationals, Mr Joyce said farmers had not been compensated enough in the past for the emissions they had reduced under the Kyoto protocol.

“The last major iteration of climate policy was Kyoto and at that time, regional people were swindled out of a private asset, their vegetation rights, and basically dispossessed of a private asset without payment,” he wrote.

“To this day, no one in government has suggested that assets be paid for. For this reason, the Nationals, on behalf of regional Australia, will be exceptionally cautious on any proposed policy platform.”