“Girl Gang,” which screened in competition at CPH:DOX and has its North American premiere this week at Hot Docs, offers a behind-the-scenes look at an industry hardly known for reticence. But in this study of adolescent influencer Leonie, her all too eager parents, and the legions of fans liking, sharing and subscribing to the family’s every post, director Susanne Regine Meures offers a more intimate look at the world of modern celebrity.

Though set in the suburbs of Berlin, this particular story of social media stardom mirrors those found all around the world. “It is a global phenomenon which actually peaks in the U.S. and in China,” Meures tells Variety. “I looked for individuals that could transcend the specifics of my topics into something bigger. Their story is universal.”

When did you first learn about Leonie? What drew you to her story?
It all started back in 2017. I was in Berlin when I saw a group of girls in a park doing slow motion pantomimes. Now, we all know about TikTok, but back then, I felt that I was entering a new universe of presentation and self-reflection. I started wondering about the contemporary girl gang, hence the film’s title.

Who are they? Where do they hang out? How do they think? What moves them? I spoke to around 160 girls between the ages of 12 and 15 until I met Leonie at a social media event. She was 13 years old and already had half a million followers, and she united all the traits of a girl that lives a life through social media. Leonie’s story seemed to be the perfect modern day adventure about dreams, illusions and self-perception, coming at a time when 86% of teenagers surveyed said they want to become an influencer.

The title denotes a group, though the film just follows a single influencer. Why keep that distinction?
Initially, I had planned to make a film about a group of girls, Leonie and her friends. Once I started filming, I quickly realized that this film was not about Leonie and her friends – but rather about her and her family. That’s where the story was. When diving into Leonie’s social media spheres, it dawned on me that the contemporary girl gang is not the group of girls in the park anymore. It’s the millions of girls hanging and congregating online. So, despite shifting my focus, the film title, which had been there from the beginning, became even more relevant.

You followed Leonie and her parents over the course of four years. Apart from rising in fortune and notoriety, how have they changed on a personal level?
First, they have become incredibly busy. Their daily lives are dictated and structured by job requests and the pressures to produce content. Family life has turned into a business, especially since Leonie’s parents have taken over her management. I could see lightness and laughter fading all while Leonie was entering puberty – a time that isn’t easy in any household on this planet. Her parents were facing an even more difficult situation: They had to protect Leonie as parents while at the same time pushing her to work as her managers. Not an easy deed, but I never saw them seriously question their choice of life. It has become their reality. 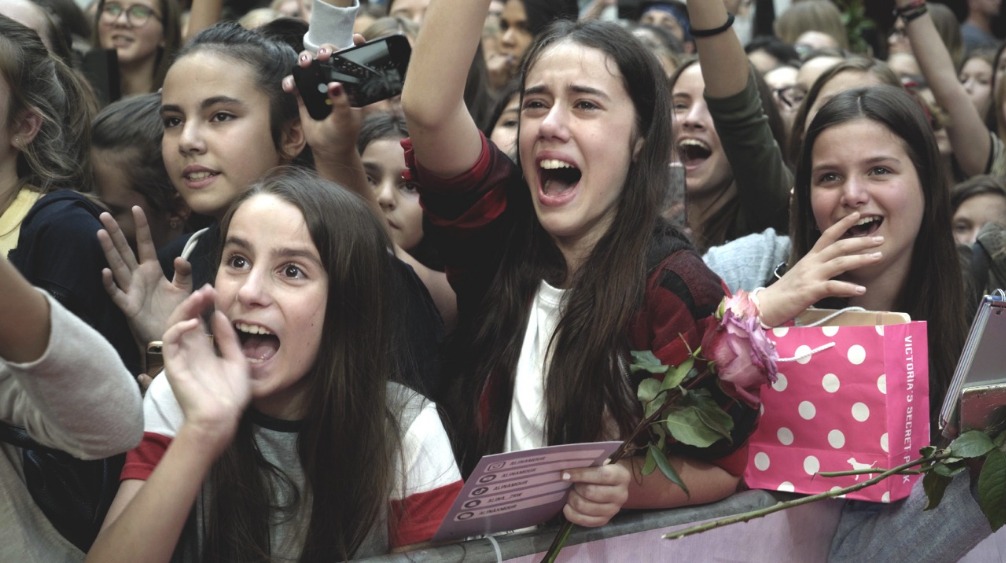 Sequences where Leonie visits shopping centers amid throngs of screaming young fans call to mind footage of The Beatles from the early 1960s. If there’s always been an inherent intensity to this sort of teenage fandom, how would say that that culture has changed now that it’s oriented around influencers and not pop idols?
It’s an interesting development. It’s not like in the 1960s with the Beatles or even the 1990s with all the boy bands. Now we have girls crying and fainting over their influencer idols. Leonie’s success is her reachability. She is their friend and she shares almost every part of her life with them. They can message her. She is so seemingly close that they can almost touch her. Instagram is a bit like a school ground, with Leonie being the popular girl. The girls project their dreams of a better self and Leonie reflects that perfectly, precisely because she is so similar. Leonie might not reply to every message she receives, but the correspondence between fan and idol has become much more common on these platforms.

You introduced the character of Melanie – a fan who develops a powerful bond to Leonie – to reflect as much.
In the era of internet-based communication, fans are also able to overcome geographical limitations to gather together, form groups and start communities. Often the fans are able to become leaders themselves again, just like Melanie in the film. She is Leonie’s greatest fan, but she herself has thousands of followers on Instagram. Fans are able to engage in a much broader spectrum of activities these days: editing content, posting comments, sharing photos and videos. As a result, fans are actively appropriating popular culture content with new and original meaning. The balance has shifted, giving the fan more power and control.

Why did you employ framing devices like fairytale-esque bookends and a choral score to work with or even against a very digital age narrative?
The story has all the qualities of a contemporary fairy tale and I knew the film needed an additional layer. Seeing girls on their mobile phones is so ingrained in our everyday life [that it can become easy to overlook]. The “Once Upon a Time” beginning installs a distance; it makes us stand back to witness something extraordinary. I chose choral music because I feel that it perfectly translates longing, [which is] the innermost emotion of the film. We all strive to become part of a community, part of something bigger. The music connects the audience to the religious quality of the topic, the longing to belong we all feel inside.

Leonie and her family would likely not share the film’s more ambivalent take on the influencer economy. How important was it to strike the right balance between views?
Since I started filming “Girl Gang,” a lot of films about social media have been released. These other films have mostly tried to warn us [about the dangers of this world]. That’s ok, only I have a different approach. In order to understand and to present the world, I like to crawl into the very center of things and turn them inside out. I may shape the story through my own understanding, but I try to interpret and show the universe of the protagonists as closely to how I experience it as possible. It is not on me to judge their choice of life.