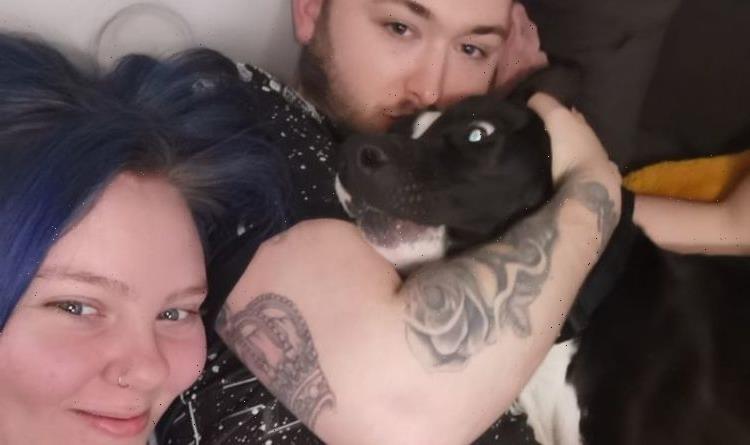 Bandit the Bull Lurcher, was just one years old when he arrived at Dogs4Rescue after his owner struggled to handle him and was described as a’biter’. The kennel-free centre had ‘almost given’ up on the young pup when Cadishead couple Chloe Cooper and Matthew Keane came along as his 13th attempt at rehoming.

Dogs4Rescue founder Emma Billington said: “This boy came to us at one years old and proved to be the most difficult to rehome dog in our history.

“It turned out to be 13 trials later, when we had almost given up hope of anyone being able to deal with him, that he struck lucky and found his right match.

“We had so many wonderful, experienced people try. He was no issue here with us, visitors, dogs etc but when he went to a home his anxiety showed in unusual ways – ripping things apart, separation anxiety at its most extreme, reactivity on lead, out of control dominance behaviour in the home.”

With the couple having had experience with many dogs in the past, including rescues, and after recently buying a house together, they decided it was time to get a dog.

After reading Bandit’s story on the Dogs4Rescue website, the couple were smitten and wanted to bring him home from the minute they met him.

After a rough bumpy start after arriving in January, Bandit has now settled in with his new owners and become part of the family.

“He’s such a clingy dog, he’s got separation anxiety – that’s what they told us, which he’s definitely proved that he has.”

Chloe added: “He challenged my partner a few times with the dominant thing, and tried testing the water with him but with me he’s just been dead cuddly.”

“Bandit soon settled in to his new home and besides a few chewed up TV remotes, he’s not been any bother. He’s been keeping his new owners entertained with his ‘human-like’ behaviour.

Chloe and Matthew have rescued several dogs in the past, with one pooch coming back with them after a holiday in Turkey.

Emma added: “His behaviour with his 13th trial was completely different. We don’t know why but we were so relieved and it reaffirmed that each dog just need to feel secure with their right people and that it’s impossible to tell who they are.

“It also reminds us never to give up. We have never been happier than for Bandit’s happy ending.”

Keep up to date with all our TeamDogs news by following our social pages. As well as videos, tips and advice, we’ll also be sharing some of your amazing doggy pictures so follow us on Facebook, Instagram and Twitter.