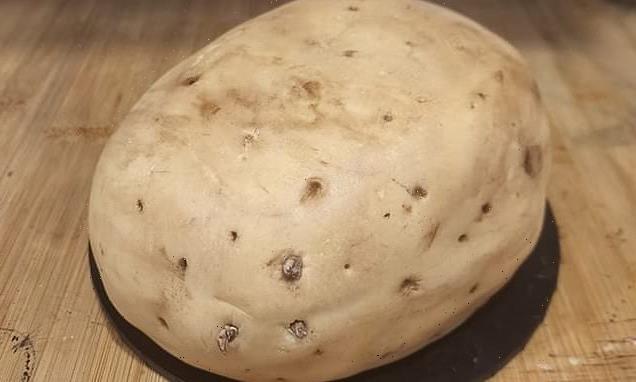 Can you spot what is wrong with this potato? Mum’s simple picture of a spud takes the internet by storm

Hundreds have been left shocked by a home baker’s ‘super realistic’ cake that looks exactly like a potato – and the $20 treat took less than an hour to make.

However the creative cake is so realistic many are not convinced it’s not actually a potato and have been demanding further evidence. 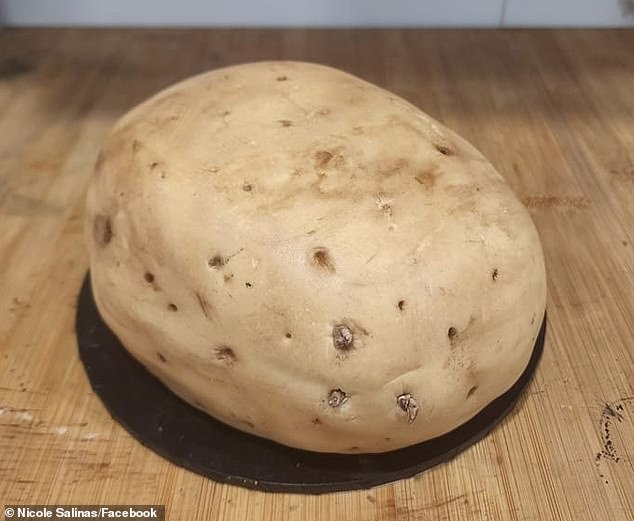 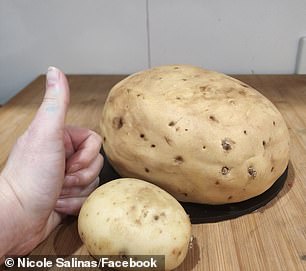 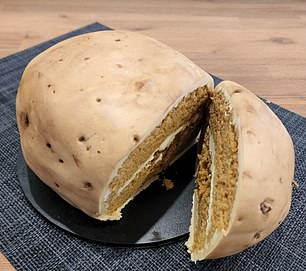 Foodies cannot believe the creation is actually cake and not a real potato. The mum had to upload a picture of the spud cut open to prove it’s cake 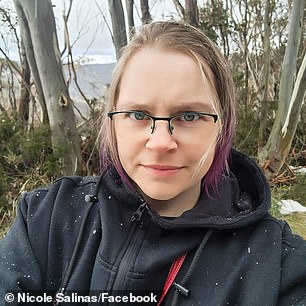 Ms Salinas, who owns the gift business Crafty Raven, got the idea from the cake from her son who suggested it for his ninth birthday.

‘They like to give me a challenge,’ she told FEMAIL.

‘He didn’t know what he wanted this time so we rattled off a bunch of objects until we settled on a potato.’

The mum explained that she’s self-taught, and believes anyone can make these kind of cakes if they have the right ingredients and ‘aren’t afraid to try new things’.

The mum said she kept costs low as she bought the mud cakes and fondant, but had ingredients like food gel at home.

* Shape the cakes by hand to get them into a potato like shape, then put a butter cream crumb coat over the cakes

* Mix gel colouring with fondant to get your desired shade

* Make marks and dimples in the cake using baking tools or everyday utensils. Use a crumpled up freezer bag on the outside of the cake to give the cake texture and add brown petal dust to give it a brushed look

To make the potato cake Ms Salinas put two layers of caramel mud cake together with butter cream in the middle.

She shaped the cakes by hand to get them into a potato like shape, then put a butter cream crumb coat over the cakes.

The most tedious part of the cake was trying to make the fondant have a potato-like colouring.

‘I spent 20 mins trying to get the fondant the right colour using three different types of gel colouring,’ the mum said.

She then used cake baking tools to make marks and pits on the fondant, and dabbed a crumpled up freezer bag on the outside of the cake to give the cake texture. She also added brown petal dust to give it a brushed look. 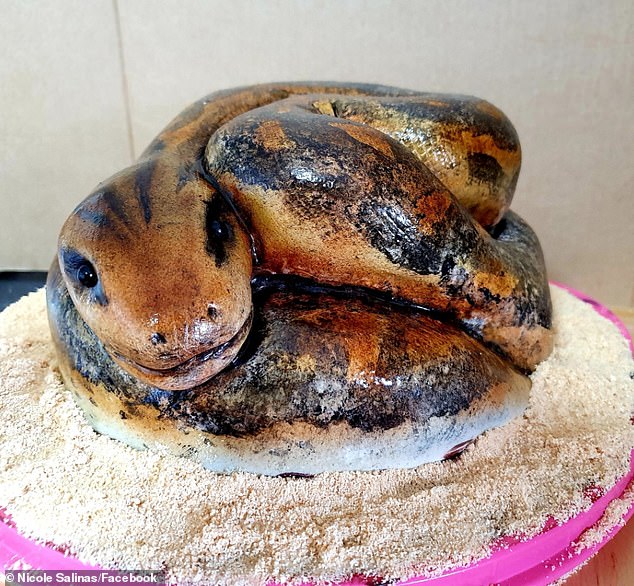 The mum often makes cakes for her kids birthdays. This cake is from last year and was also made using Woolies caramel mud cakes

The mum often bakes the creations, and said although most take around an hour, it can take ‘anywhere up to eight hours.’

‘My son joked about wanting a cake that looks like a potato,’ the mum said when she uploaded her creation to popular Facebook group Woolies/Coles Mudcake Hacks.

Ms Salinas advised fellow bakers to add butter to the icing to make it ‘a bit less sweet and a bit more like buttercream’.

The post immediately garnered thousands of comments and likes from bewildered foodies who couldn’t believe their eyes. 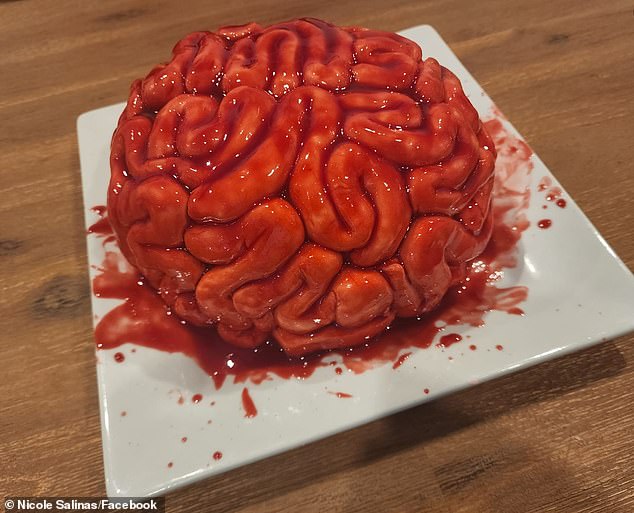 This brain cake was another of her lucky son’s birthday cakes, and was made with the same caramel Woolworths mud cake

‘We need a cut photo please for proof! It looks too much like a potato to be a cake,’ one disbelieving woman said.

‘I feel like we all need proof of it cut to believe it’s cake!’ another agreed.

‘Excuse me Ma’am, that’s an actual potato,’ another woman said.

‘I thought you were going to post the photo of the cake, not an actual potato,’ another laughed. 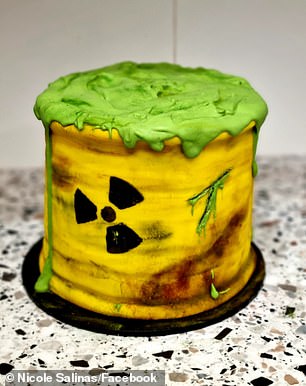 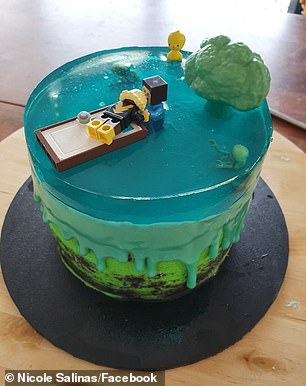 ‘Are we sure this isn’t a potato?? The likeness is incredible!’ one mum joked.

However some people believed it was a cake rather than a potato.

‘That is the best “real” cake I have seen,’ one woman said.

‘The realism about this is incredible! So simple, but so much detail. Should be proud of this “pocaketo”‘, another wrote.

This isn’t the first time Ms Salinas has made a jaw-dropping creation, she often shares the creations she makes for her kids birthdays online.

She has previously made a snake cake, brain cake, toxic waste cake, natural disaster scene cake and a dragon. 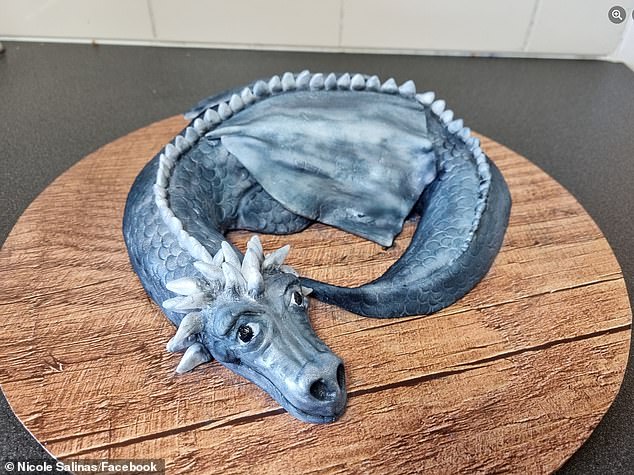 The mum made this cake for her daughter during lockdown using three Aldi mud cakes. The entire process took three hours

* Utilise what you can find at the super market

* Learn by copying other people

* Look for inspiration in photos online