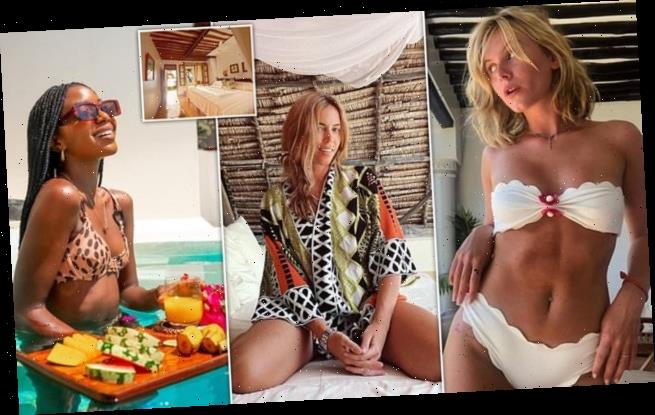 Too posh for Dubai? Live it up on Lamu! How Lady Lola Bute, Dominic West and Charlotte Tilbury led the escape to the (almost) Covid-free Kenyan island with no masks or quarantine where Princess Beatrice’s in-laws have a home

With no masks, no quarantine and almost no Covid, it is easy to see why the remote Kenyan island of Lamu has become a popular pandemic escape.

Led by Lady Lola Bute, the socialite daughter of the late Marquess of Bute, glamorous jet-setters from around the word have descended on the tranquil isle where Princess Beatrice’s in-laws and Princess Caroline of Monaco own property.

Among the recent arrivals is Old Etonian actor Dominic West, who headed to Lamu in January for a five-week stint after being snapped canoodling last autumn in Rome with Lily James. It is believed he was accompanied by his wife Catherine FitzGerald and their children.

Meanwhile makeup guru Charlotte Tilbury was running her beauty empire from a rented house on the island as recently as last month. 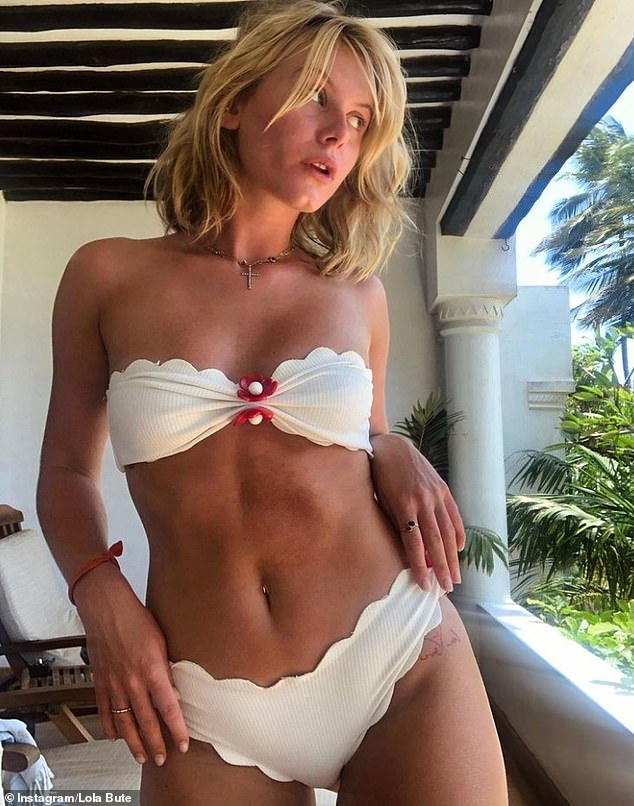 Led by Lady Lola Bute, the socialite daughter of the late Marquess of Bute, pictured, glamorous jet-setters from around the word have descended on the tranquil island of Lamu, Kenya 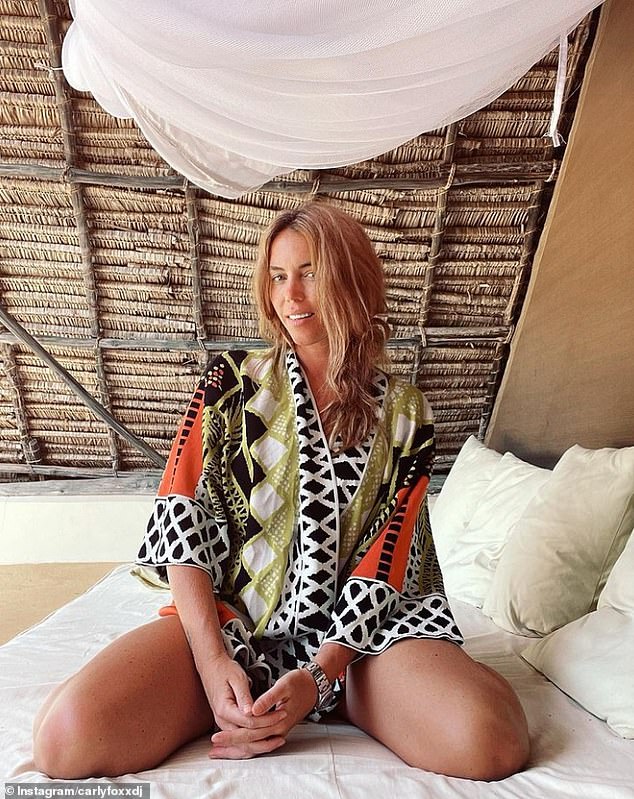 DJ Carly Foxx has also shared photos from Lamu with her Instagram followers. The island has no masks, no quarantine and has had very few cases of Covid, making it an attractive escape 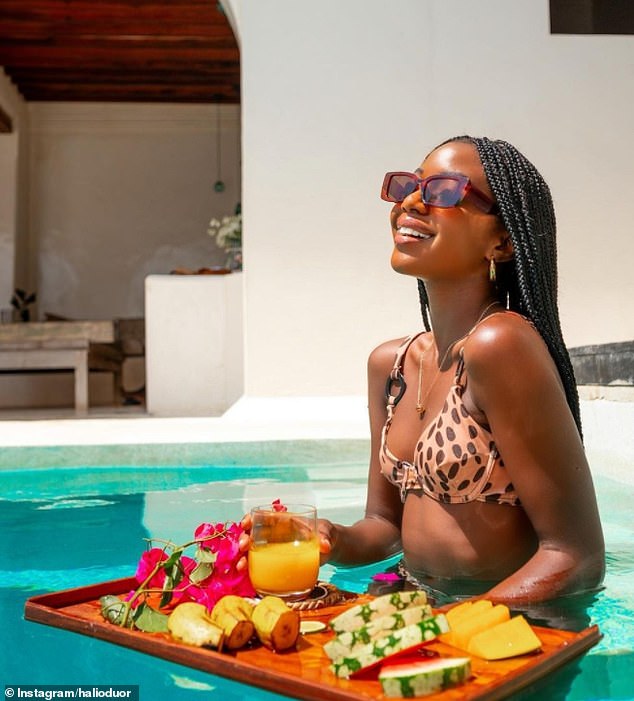 Nairobi-based influencer Hali Oduor shared this stunning snap of breakfast in a pool on Lamu. Visitors can choose to stay at one of the island’s hotels or rent out a private residence

Two of the sons of Jemima Goldsmith and Imran Khan, the Pakistani prime minister, have also been spotted on the island in recent weeks.

Kenya has long been a refuge for the rich and famous ever since the days of the uninhibited ‘Happy Valley’ 1930s set, headed by the Earl of Erroll.

Most of the British visitors and influencers set up camp in Shela, a small settlement on the south-east side of the island which was favoured by the late ‘Bunny’ Allen, a big-game hunter who helped the Duchess of Gloucester catch cheetahs and enjoyed affairs with Grace Kelly and Ava Gardner.

Visitors must first fly to Nairobi, then take a short flight to Lamu and complete their journey to Shela by boat, landing on a beach. 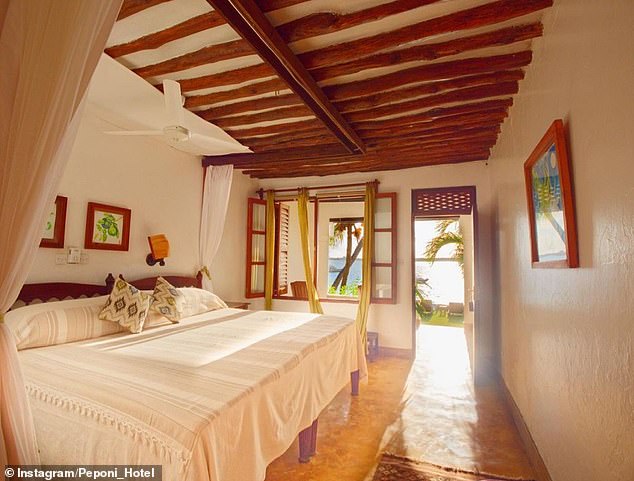 Among the most popular hotels is high-society favourite Peponi – ‘Paradise’ in Swahili – which is where Lady Lola stayed. Pictured a photo of one of Peponi’s sea-fronted rooms 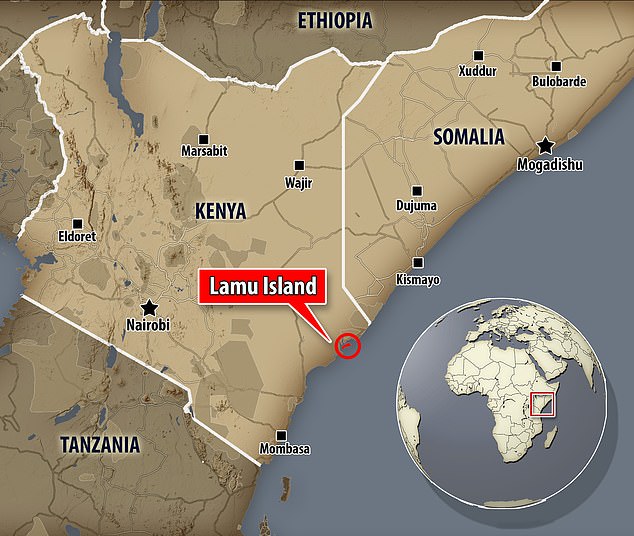 Visitors to the popular tourist outpost of Shela must first fly to Nairobi, then take a short flight to Lamu and complete their journey to Shela by boat, landing on a beach

Life passes slowly there and there is little in the way of tourist facilities. Donkeys are still the preferred mode of transport.

Among the most popular hotels is high-society favourite Peponi – ‘Paradise’ in Swahili – which is where Lady Lola stayed.

Originally a private residence owned by a Nestlé heir, it was bought and renovated by Danish family the Korschens in the 1960s. Word soon spread and by the 1980s it was attracting the likes of Mick Jagger and Jerry Hall.

Princess Caroline of Hanover and her husband Prince Ernst of Hanover, who was last week handed a suspended jail sentence, were among the first big names to snap up property on Lamu. They built the imposing Beach House and renovated three other villas in Shela.

The super-rich, celebrities and aristocrats have been coming ever since. Sting, Jude Law and Sienna Miller have all holidayed there. 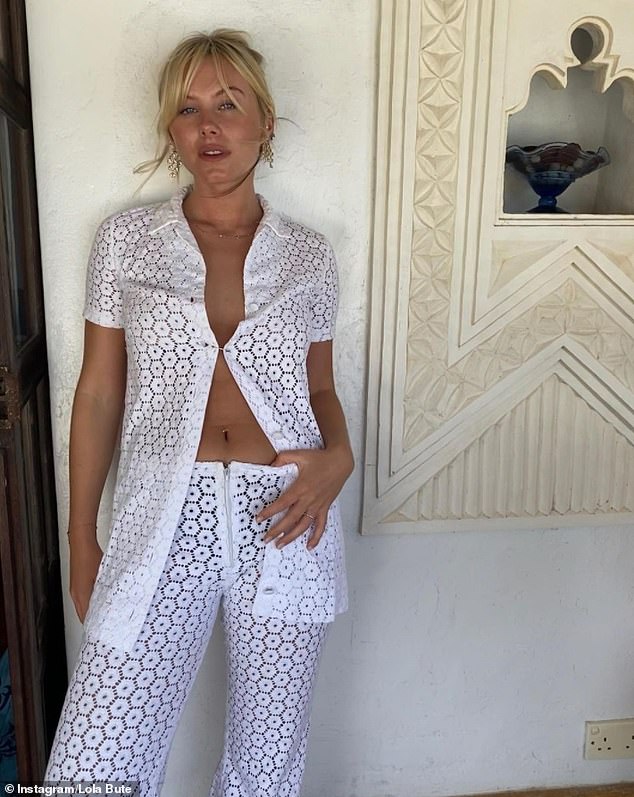 Lady Lola Bute shared this snap from her time in Lamu, she has since returned to the UK

Lamu also holds a special place in the heart of Princess Beatrice and her husband, Edoardo Mapelli Mozzi.

Edo’s family own a coastal estate, which was built from scratch by his mother, Nikki Shale, and his late stepfather, Christopher Shale, a close associate of David Cameron.

The couple enjoyed one of their first holidays together there and reportedly were planning to holiday on Lamu before their plans were cancelled due to the pandemic.

Lamu has received renewed attention in recent months thanks to the escape it offers from a world fed-up with lockdowns. 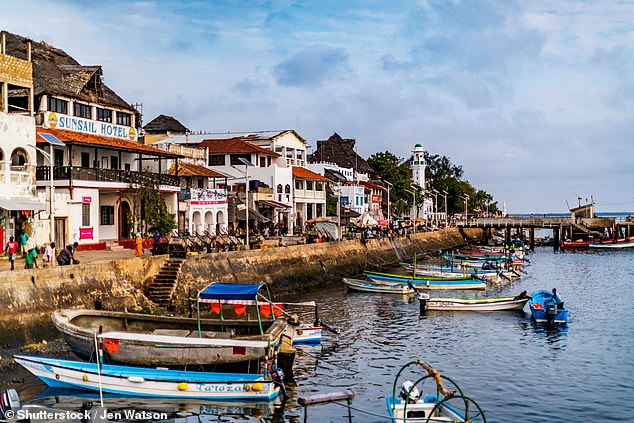 Lamu Town is the hub of the island, but British visitors prefer the quiet output of Shela 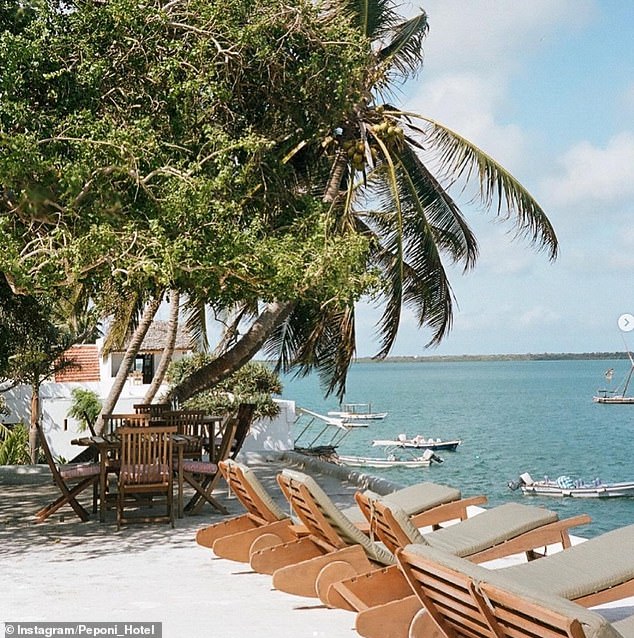 The beachfront at the Peponi Hotel, which is a favourite with well-heeled visitors to Lamu

‘We have seen a lot more celebrities recently. They are escaping Covid and lockdown.

‘In Lamu we see princesses and all manner of people,’ Alejandra Wolf, manager of Majlis Lamu, which offers rooms at up to £1,300-a-night, told The Times.

The island has had very few cases and has taken a relatively relaxed approach to the virus.

Masks are not required indoors or outdoors and there is no quarantine on arrival. Visitors simply need to show proof of a negative test and adhere to the 10pm-4am curfew. 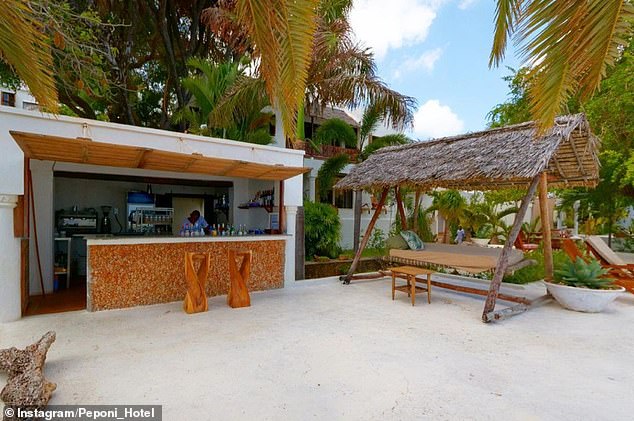 Beach bar at the Peponi hotel, where visitors can unwind and soak up the sunshine