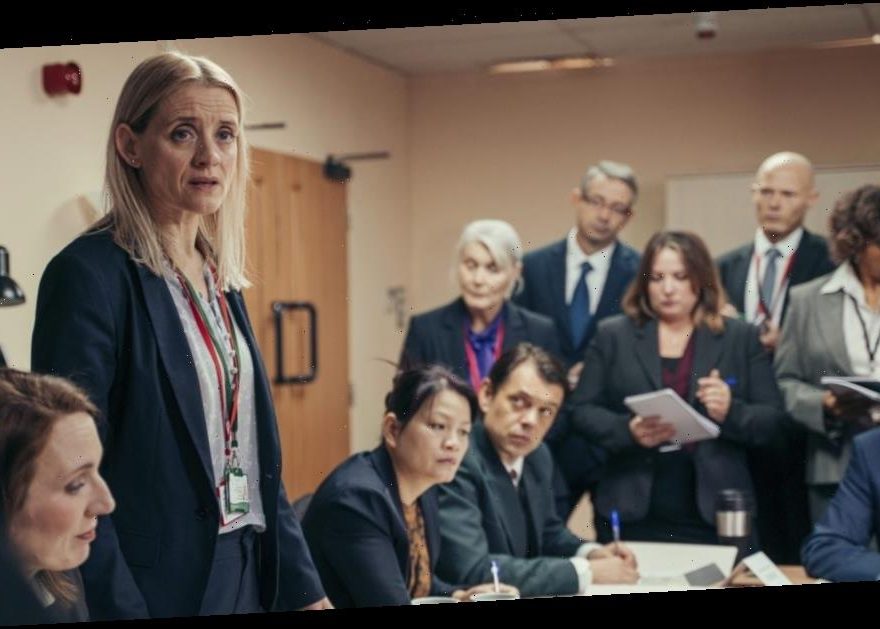 The BBC has unveiled a slate of eight drama series, including the latest projects from the writing teams behind The Salisbury Poisonings and Humans, and a Maxine Peake series about sexual politics in the modern workplace.

The projects were announced on Tuesday by BBC drama director Piers Wenger and are designed to mark his unit’s contribution to BBC plans to produce more in the UK’s nations and regions. Each series will be made outside of London and Wenger said they celebrate the “true range of authorship” from Britain’s creative communities.

Among the series is the six-part, Belfast-set rookie police officer drama Blue Lights, from Adam Patterson and Declan Lawn (see below for full details). It’s their first series since The Salisbury Poisonings last year, which was picked up by AMC after becoming the highest-rated new drama launch on British television since 2018. Two Cities is producing.

Humans scribes Sam Vincent and Jonathan Brackley are teaming with Chernobyl producer Sister on Better, a six-part thrilling redemption story set in Leeds. BAFTA-nominated The Theory Of Everything actress Peake is set to star in the four-part #MeToo-era series Rules of the Game from All3Media’s The Forge.

BBC Three will explore the origins of grime music in six-part Grime Kids. The series is inspired by a book by DJ Target, is produced by Mammoth Screen, and is written by BAFTA-nominated Theresa Ikoko. Meanwhile, Sherlock producer Hartswood Films is making three-part The Control Room, which centers on an emergency call handler in Scotland.

Take a look at the full slate below:

Blue Lights (6×60) (BBC One) from Northern Ireland
Blue Lights is an original police drama created by the writers of The Salisbury Poisonings, Adam Patterson and Declan Lawn.

Blue Lights is the story of rookie (probationary) police officers working in contemporary Belfast, a city in which being a frontline response cop comes with a unique set of pressures and dangers. As they learn the basics of their profession, our new officers have to come to terms with a constant threat. In this often-chaotic environment, our characters have just a few crucial months in which they’ll make it as police officers.

Inspired by extensive research and interviews, and told with a caustic wit, Blue Lights is inspired by the experiences of serving police officers in Northern Ireland. It’s a fast-paced, frightening, and funny insight into what happens when the idealism of the police college classroom meets the reality of life, in a precinct that’s as starkly divided as it is terrifyingly dangerous.

Blue Lights is Executive Produced by Tommy Bulfin for the BBC, Stephen Wright for Two Cities Television and Louise Gallagher for Gallagher Films, and by Lawn and Patterson. Two Cities is part of the STV Studios group of production labels.

Patterson and Lawn said: “Belfast is our home town, and to be able to write a show set in the city we know and love is one of the great privileges of our lives. It’s a real joy to be bringing a major BBC drama back home.”

Better (6×60) (BBC One)
From the writers of Humans, Sam Vincent and Jonathan Brackley, and Sister, Better is a thrilling redemption story, set in Leeds and using the landscape of the city and surrounding countryside as a backdrop to what becomes an epic battle for one woman’s soul.

After a family tragedy is narrowly averted, a corrupt police detective undergoes a painful moral awakening and decides to put right twenty years of wrongdoing – but satisfying her newfound conscience won’t be straightforward. She slowly realises that her redemption will only be complete once she brings down the powerful gangster she has worked for all this time, a man she helped rise to power, and has come to love like a brother.

Better is Executive Produced by Mona Qureshi for the BBC and Jane Featherstone, Chris Fry, Lucy Dyke, Sam Vincent, and Jonathan Brackley for Sister in association with Northern Sister.

Vincent and Brackley said: “Better asks if a truly bad person can ever become good, and if so, how that could happen. The idea’s been in our heads for ten years, and we’re hugely fortunate to be telling it.”

The Control Room (3×60) (BBC One) from Scotland
Filmed and set in Scotland, The Control Room is a gripping new drama from Hartswood Films, written by BAFTA and RTS award-winning writer Nick Leather (Murdered for Being Different).

The Control Room tells the story of Gabe, an ordinary man who works as an emergency call handler for the Scottish Ambulance Service in Glasgow. His world is turned upside down when he receives a desperate life-and-death call from a woman who appears to know him. With Gabe under pressure to work out who she is, he makes a decision that threatens to have devastating consequences.

The Control Room is Executive Produced by Gaynor Holmes for the BBC and Elaine Cameron for Hartswood Films. The producer is Eric Coulter and director is Amy Neil.

Wolf (working title) (6×60) (BBC One) from Wales
Filmed and set in Wales, Wolf is written by Megan Gallagher and based on Mo Hayder’s acclaimed Jack Caffery novels.

In an isolated house in the country a family find themselves the victims of a terrifying psychopath’s cruel games. Meanwhile, DI Jack Caffery obsessively tries to find evidence to convict the neighbor he believes murdered his 8-year-old brother in the 90s. When these two narratives collide it’s a race against time in this emotionally powerful, nail-biting and deeply disturbing crime-thriller/horror mash-up.

Wolf is Executive Produced by Ben Irving for the BBC, Elaine Cameron for Hartswood Films and Laurent Boissel for APC Studios. Gallagher said: “After reading the book in a single day, I knew I had a gem in my hands.  I consider it an honour to bring DI Jack Caffery to BBC One.”

Rules of the Game (4×60) (BBC One)
Rules of the Game is a gripping new four-part thriller about sexual politics in the modern workplace starring Maxine Peake as Sam, a hard-headed manager at a family run business in the North West.

When new HR Director Maya begins her job at Fly, she tries to shake up the old fashioned lads culture and begins investigating historic cases of misconduct. But Sam bristles at the suggestion of institutional bias against women – that was all in the past and things are different now that she’s in charge. However, when Sam arrives at work one day to find a dead body in the office reception, she is forced to reckon with not only the murky behaviour in the present, but murderous secrets from the past as well.

Rules of the Game is written by Ruth Fowler with George Faber and Mark Pybus as Executive Producers for The Forge, Lucy Richer and Ayela Butt for the BBC. Jennifer Sheridan will direct all four episodes and the producer is Simon Meyers.

Fowler said: “When we conceived this show it was during the Weinstein scandal, and I was concerned it might have dated in the interim. How sadly wrong I was and I’m honoured the BBC and everyone else championing this story did not let it fade away as its relevance has become even more acute. Many women’s experiences (including my own) inspired this fictional show – with the added benefit that in the retelling no women were harmed, maimed or exposed to Harvey.”

Grime Kids charts the rise of a fictional group of young adults growing up in the late 1990s, dreaming of being able to make their voice heard through grime music. Set against a backdrop of real events and cultural moments, Grime Kids reveals how grime, born from within British housing estates, took over the world.

The series follows nineteen-year-old Sheffield lad, Jamie, a new recruit who joins the crew in search of his missing sister. She was working aboard the same vessel on a previous tour and never made it home. Jamie is initiated into cruise life and gets a crash course on the teen tribes within the staff: the theatre kids, the drop-outs, the low-paid workers from developing nations. For this overworked and underpaid crew, life below deck is an odyssey of partying and excess… and they remain oblivious to the bloodthirsty murders taking place on board. Jamie is forced to turn detective and uncover the sinister truth that runs as wide and deep as the ocean he’s trapped on.

Wrecked is Executive Produced by Tommy Bulfin for the BBC and Noemi Spanos for Euston Films.

Brown says: “In Wrecked, the kills are brutal, the laughs are loud, and the heartfelt moments land with real candour. I wanted to create a piece of genre entertainment that had the savvy teen sharpness of Scream, the unsettling atmosphere of The Shining and the strange upstairs, downstairs mythology of Cabin in the Woods. At its core, Wrecked is a tense coming-of-age story about a lost, gay kid from Sheffield propelled into uncharted waters of escalating paranoia and self-discovery.”

Modern dating can be an isolating, lonely experience, where feelings are hidden and meaningful connections always seem just out of reach. But Domino has one small advantage in the dating game: she isn’t swiping to find her soulmate— she’s using it to hunt. Domino is a powerful young witch who is haunted by her need to feed on the energy of others.  A hunger that only grows, despite her attempt to start her life over in Manchester, where she is desperately seeking a community who can help her understand what is happening to her.  But  Domino doesn’t need to try so hard… a coven of witches are already tracking her every move,  convinced they have to stop her before her powers destroy everyone and everything around her.

Domino Day is Executive Produced by Lucy Richer and Ayela Butt for the BBC, Laurence Bowen and Chris Carey for Dancing Ledge Productions and Lauren Sequeira.

Sequeira says: “I’m over the (full) moon to be doing this project with the BBC and Dancing Ledge Productions, who have really championed my career from the start. I wanted to write a supernatural series that wasn’t only thrilling and twisty, but also tapped into the very real dating scene and how it affects modern relationships.”