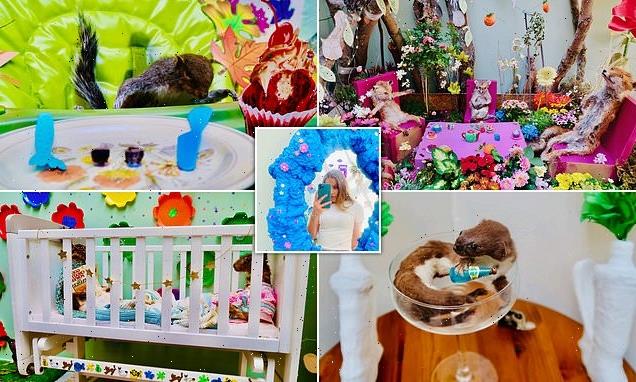 Not your average tea party! Taxidermy animals celebrate with alcohol and cake in whimsical university art project inspired by the Bible that imagines the world before God created humans

An art student has used taxidermy animals to create a fantastical work of art inspired by the bible that imagines how animals spent their last night on earth before the creation of humans.

Zoey Andreas, 24, from Croydon, London, used 28 animals that had died by natural causes – including four foxes, two rabbits and a kitten – and positioned them in a number of celebratory scenes.

The final year art student was inspired by the creation story in Genesis, particularly the sixth day when God created land animals and then humans.

But Zoey imagines how things might have unfolded if the animals tried to intervene to stop humans from being created – and had a party in the process. 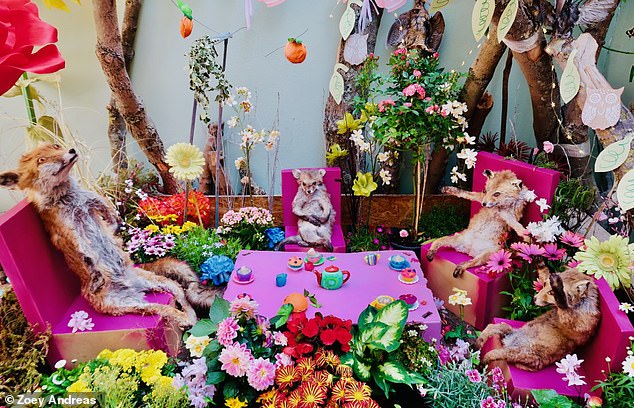 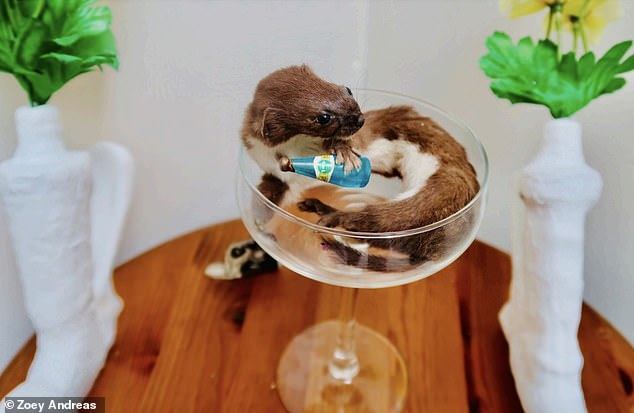 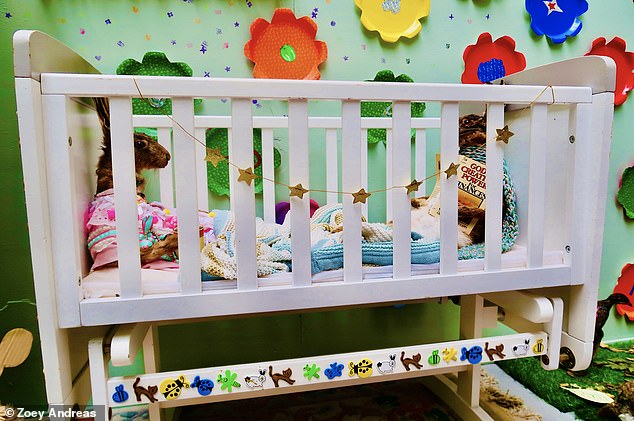 The animals are shown at a rowdy social gathering, complete with cake, tea, alcohol and decorations.

The work, titled the Garden of Eden, is on display at the University of London BA Art and History of Art Degree Show from June 17 to 22.

Zoey explained: ‘The home I have created is a world for the animals, before humans were created by God, with the mindset of the happy lives the animals would have if humans were not created at all.

‘In the space the animals converse, and plan to change God’s mind on his so-called great idea to create the human species.’ 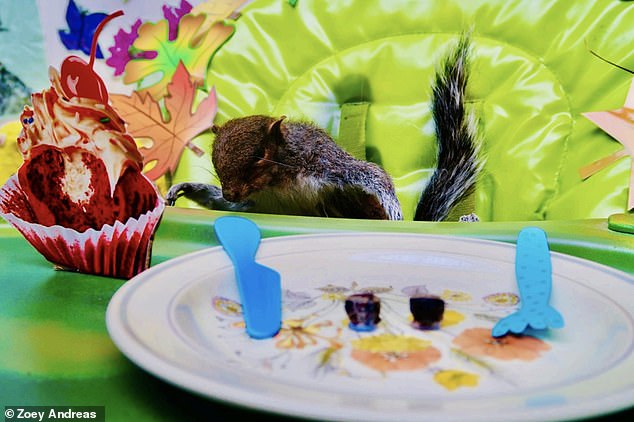 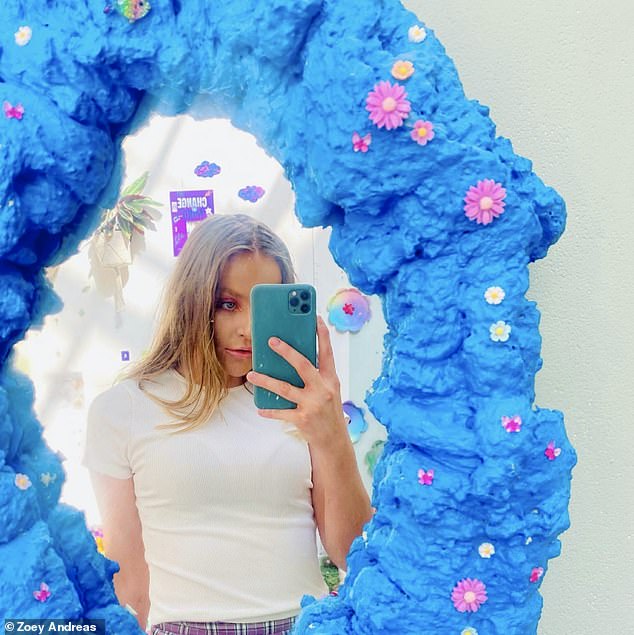 Zoey Andreas, 24, from Croydon, London, used deceased animals her exhibition called the Garden of Eden at the University of London BA Art and History of Art Degree Show

It also takes reference from the Bohemian Grove gentlemen’s club in California which was frequented by US presidents.

In one scene, a weasel enjoys a tipple as it relaxes in a martini glass, while hares relax in a baby’s cot. Elsewhere a squirrel tucks into a cupcake and foxes appear in an animated discussion around a table.

Other animals used include two squirrels, a woodcock, grouse, rabbits, moles, ducks, hares, a rat, a weasel, a toad, and a frog. 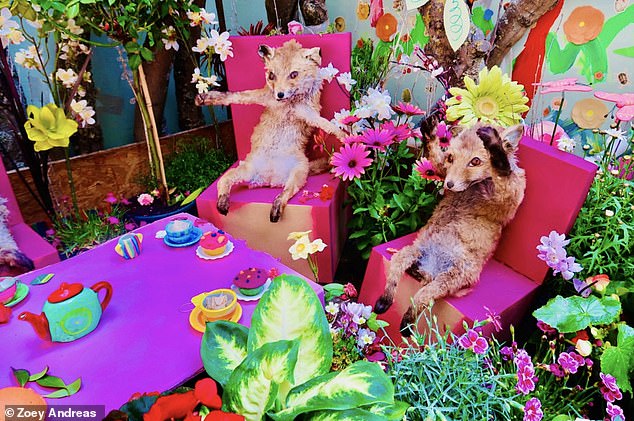 Garden of Eden, which Zoey describes as a ‘questionable idea of heaven’ shows foxes appearing to have an animated discussion around a table 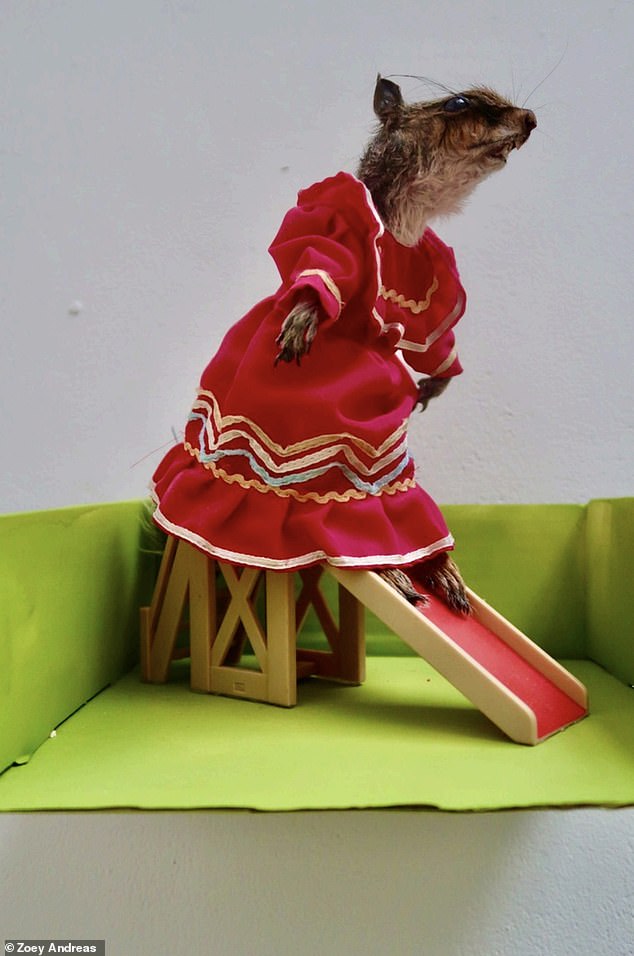 The animals enjoy themselves on miniature play equipment on the evening before humans were created on the sixth day, as described in the Book of Genesis

All of the taxidermy animals were made by Zoey and ethically sourced – meaning they died naturally or are roadkill, rather than being intentionally hunted.

The final year BA Art student is a lifelong animal lover and learned how to taxidermy after her sister gave her a voucher for a class as a Christmas gift.

She continued: ‘A lot of time and planning has gone into the installation, including collecting second-hand and recycled materials.

‘I do my taxidermy at home, on the dining room table mostly. I started migrating to the kitchen and the garden towards the end as I was running out of space.

‘You need access to water to wash the skins after and it can be messy, so it’s convenient to do at home.

‘The home environment has inspired the warm homely vibe of the installation. I enjoy the process of taxidermy, seeing the animals transformed after cleaning, washing, and presenting… it gives them a new lease of life.’ 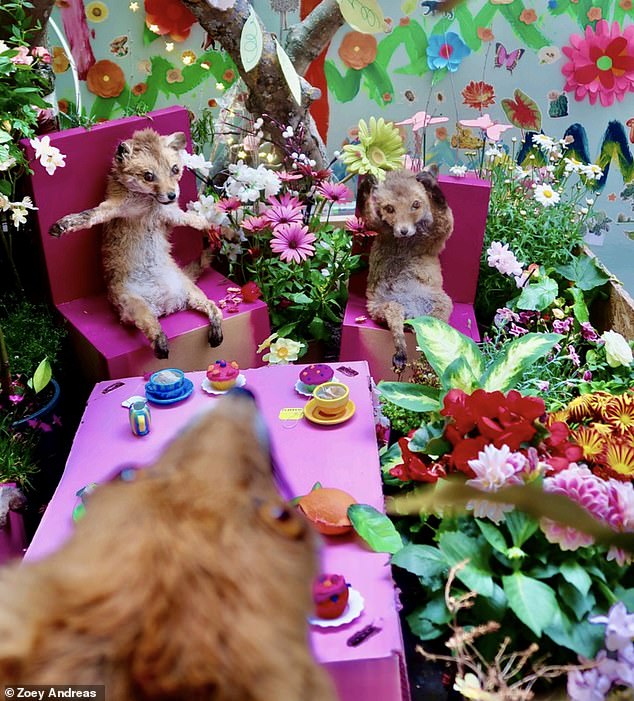