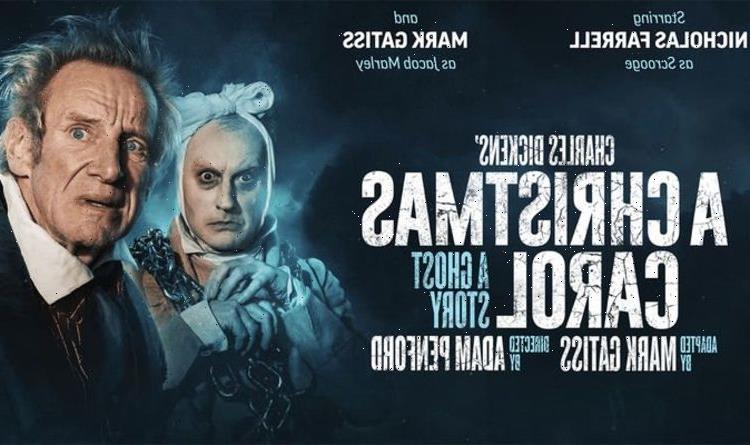 A Christmas Carol: Scrooge is confronted by Jacob Marley

Published over 175 years ago, A Christmas Carol remains one of the festive seasons’ best-loved stories. Amid the commercial indulgences and family feasting, Charles Dickens’ novella is an annual reminder and parable to shun selfishness in favour of generosity; not overlooking the less fortunate during the darkest and coldest time of the year. There have been so many different adaptations of the Victorian classic over the decades and now its writer and actor Mark Gatiss’ turn.

The multi-talented artist has written for the BBC’s Doctor Who, Sherlock and Dracula in recent years.

And since 2013 he has penned and directed four one-off TV specials in the revived A Ghost Story for Christmas series based on the works of MR James, with the latest being The Mezzotint which will be broadcast on Christmas Eve.

It was only a matter of time then that Gatiss, a horror aficionado long before his days as part of The League of Gentlemen, would tackle Dickens’ most famous spooky tale.

It’s not as well known now, but the original title of the 1843 novella was A Christmas Carol. In Prose. Being a Ghost Story of Christmas.

With this in mind, it goes without saying that Gatiss’ adaptation leans heavily on the supernatural side of the tale.

A Christmas Carol: A Ghost Story, began its run at Nottingham Playhouse, the creator and co-producer of the show, before the end of October.

But, as Gatiss explained at the time, his version works well as a transition from Halloween and into Christmas.

If anything, his take on the festive story is very much a nightmare before Christmas, beginning with creepy Tim Burton-esque settings and jump scares before seeking to warm hearts with an Anglican hymn by its conclusion.

The play, directed by Adam Penford, has since moved to the newly reopened Alexandra Palace in London, which provided a particularly haunting setting for the production; as parts of the wall crumbled away and scaffolding remained in use to the right of the stage.

Gatiss himself plays Jacob Marley’s ghost, Ebeneezer Scrooge’s dead business partner who warns him to change his life before it’s too late – as is somewhat similar to Christ’ parable of the Rich Man and Lazarus.

This adaptation actually begins before his character’s death, with Scrooge and Marley working high up on their tall spindly desks, surrounded by absurdly tall filing cabinets that wouldn’t look out of place in a Terry Gilliam movie.

The opening scene features a sudden fatal heart attack for Marley before the horror side of the play truly begins for Nicholas Farrell’s perfectly cast Scrooge.

One of the best aspects of this spooky version of A Christmas Carol are the incredible special effects.

These are at their most spectacular when Marley’s ghost is haunting Scrooge’s house, firstly as the door knocker, before appearing as a terrifying apparition.

Servant bells ring to the side of the stage before Gatiss’ spirit sways toward the old miser, with chains clanking behind him.

Clearing the League of Gentleman star is having the time of his life in the part, as he shrieks and flies towards Scrooge in one particularly frightening jump scare.

Upon warning Scrooge that he’ll be visited by three Christmas ghosts, spectres fly through the audience in this dark opening.

After Marley’s departure, much of the rest of the play is the warm-hearted story we know well, with Gatiss playing other roles including the lead’s eccentric old schoolmaster and later returning as his dead partner once more for the finale.

The well-known story itself ends with a satisfying twist that honours the original ending as the cast sing O Come All Faithful while holding lanterns by a snow-covered Christmas tree.

Aside from the odd meandering in the middle, A Christmas Carol: A Ghost Story is one of the best and freshest takes on Dickens’ classic in recent years, providing both genuine scares and festive fun.

A Christmas Carol: A Ghost Story is performed at Alexandra Palace Theatre until January 9, 2022 and tickets can be booked here.