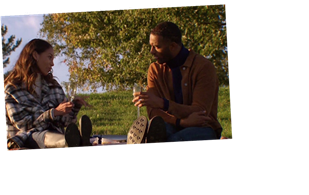 Your Monday nights include Matt James and charcuterie boards. As a big fan of The Bachelor, you never miss one of the *most dramatic* episodes or the chance to snack on cheese, crackers, and jam. So, when you tuned in to the Jan. 18 episode of the show, you were likely so ecstatic to see James learning how to arrange a cheese board on national television. The Bachelor lead took to Twitter during the episode to show off one he made at home, and let’s just say Matt James’ Bachelor charcuterie board is giving people major feels.

Before we get into James’ very unique creation, let’s recap. James went on a one-on-one date with Serena P., a 22-year-old publicist from Toronto, Canada who James said he was "enchanted" by during the episode. They rode horses through the Pennsylvania woods before they stopped to have a picnic complete with kisses, donkeys, and a charcuterie board discussion. It seems that almost instantly Bachelor Nation became a fan of Serena and her genuineness when mentioning that she is "falling in like" with James later on in the night.

But, Serena’s love for a perfectly-designed cheese board is what may have made you swoon the most. She was not only quick to show James the ropes, but also noted how crucial it is to include brie, jam, the works. As the date was aired, Twitter users had no shame sharing their heart eyes.

Around the same time, James tried to make his own charcuterie board at home with — wait for it — pizza Lunchables, Teddy Grahams, and buffalo ranch hummus with pita chips. He posted a time-lapse on his IG Story of him spreading out his chosen ingredients on a white board, as well as a picture of the final product on Twitter, where he asked fans to rate it on a scale of one to 10.

Some fans were quick to give his creation a huge thumbs down since he left the Teddy Grahams turned upside-down, and didn’t take Serena P.’s suggestion to include brie. One user said in a response to the tweet, "My eyes are burning," and others tagged their charcuterie-loving besties to weigh in.

On the contrary, some fans were totally impressed that Teddy Grahams still exist, and were intrigued by the buffalo ranch hummus. A few of the cheese board fans also enjoyed how James placed his snacks in the shape of a heart.

Even if James’ charcuterie board isn’t the most IG-worthy one out there, it scores major points in the creativity department. After seeing his creation, you can probably picture yourself adding some Teddy Grahams ($3, Walmart) and pizza Lunchables ($2, Target) to your next charcuterie board. You may even decide to track down a tub of the Ithaca Hummus buffalo ranch hummus, which is a limited-time offer by the brand.

Of course, if you really want to go all out, you can add all of these items and try to recreate James’ board exactly. If you do this, be sure to share your photo on Twitter and tag the Bachelor at @mattjames919. Here’s to more Monday nights filled with roses, dates, and charcuterie boards.