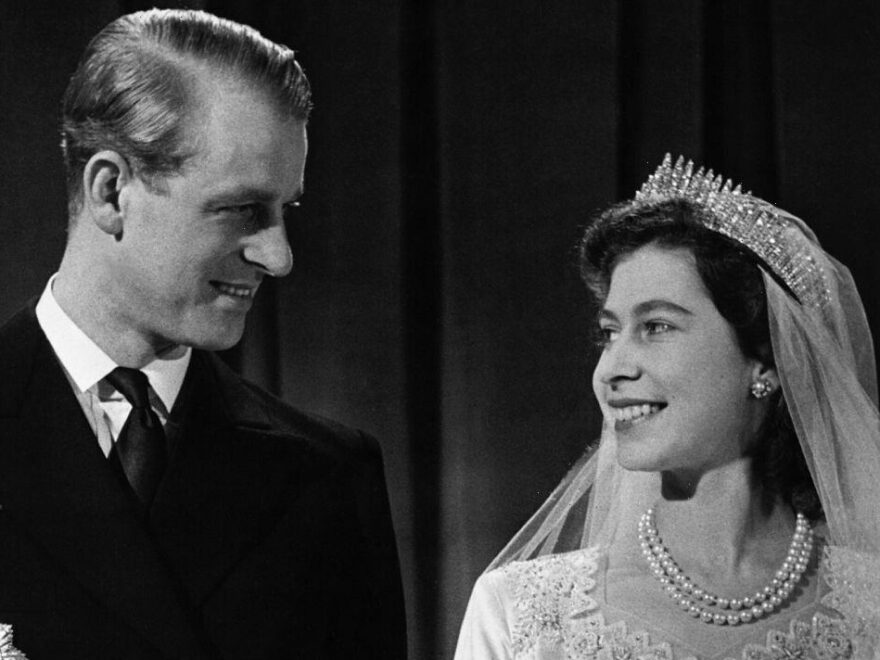 Queen Elizabeth, who sadly died on September 8 at the age of 96, would have celebrated her 75th wedding anniversary with Prince Philip today. The two married on November 20, 1947 in Westminster Abbey.

It has been discussed frequently by royal commentators, especially because it was later worn at two other royal weddings – Princess Anne’s in 1973 and Princess Beatrice’s in 2020.

But Her Late Majesty also wore some other fabulous jewels on her wedding day that are seldom talked about.

The CEO of Le Vian, Eddie LeVian, whose ancestors guarded the royal jewels of Persia, spoke exclusively to Express.co.uk to discuss the Queen’s other wedding jewellery.

He said: “Queen Elizabeth’s wedding necklace was made up of the Queen Anne and Queen Caroline Pearls — two separate strands that have been worn together as a family tradition dating back to Queen Victoria.

“The pearls were gifted to Princess Elizabeth by her parents on her wedding day, a symbol of the exciting new chapter she was about to begin.”

The necklaces are generally worn together as a pair, resembling a double-stranded pearl necklace, but they are two distinct, separate pieces with individual clasps.

The necklaces were displayed along with numerous other jewellery presents at St. James’s Palace ahead of the wedding day.

Then-Princess Elizabeth planned to wear the necklaces on her wedding day, but when she was getting ready to depart, staff realised the necklaces were still on display with the rest of the couple’s wedding gifts.

Traffic on the wedding day was reportedly very bad, but Mr Colville managed to secure the pearls in time.

This was mainly because then-King Haakon VII of Norway, the bride’s great-uncle, loaned Mr Colville his limousine.

One of the most recent major outings for these pearls since the late Queen’s wedding was at the Diamond Jubilee Concert outside Buckingham Palace in 2012.

On that occasion, the creamy pearls coordinated nicely with her golden dress.

But the Queen’s necklace was not the only other significant jewel on her wedding day, according to Mr LeVian.

He added: “The Queen’s dazzling pearl and diamond cluster earrings, known as The Duchess of Gloucester’s Diamond and Pearl Earrings, were also a family heirloom, dating back to Princess Mary, one of the daughters of King George III.

“At Le Vian, we named pearls as our 2022 gem of the year within our annual trend forecast, noting how beloved these precious gems are.

“This is because of the pearls of wisdom they represent, amassed through experience, reflection and hope.”

Mary Adelaide later became the mother of Queen Mary. In 1947, as her granddaughter, then-Princess Elizabeth, was leaving for a tour of South Africa, Queen Mary gave her the pearl clusters.