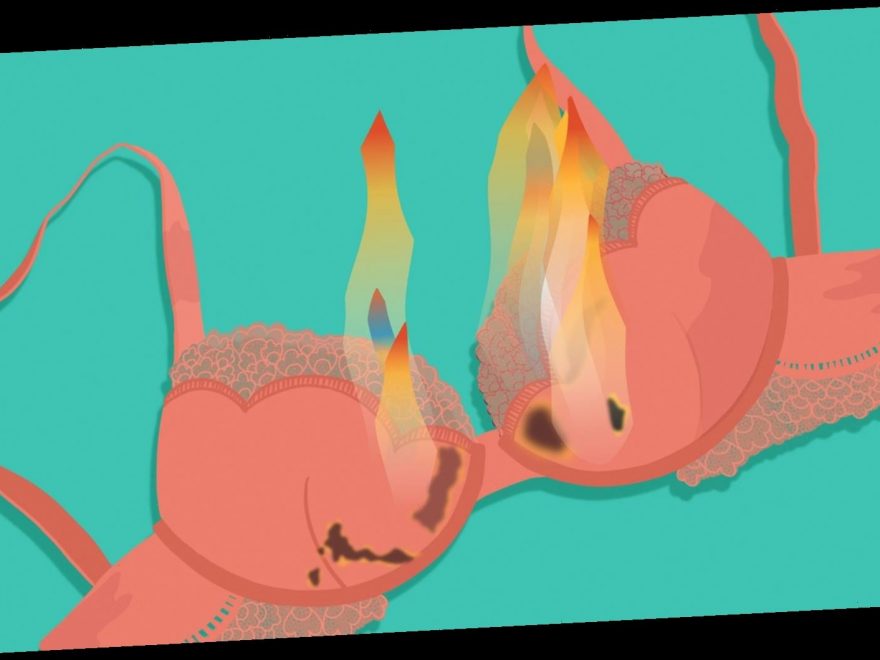 A woman walks through the front door of her home, keys and purse in hand. She exhales dramatically as she slips her shoes off, stepping on one heel and then the other, and tosses her things on the entryway table.

If you're a person that wears a bra on a regular basis, you know what comes next. She reaches around her back, unhooks the clasp, wriggles her arms loose, and then pulls her bra from beneath her shirt with the flair of a magician pulling a scarf from their sleeve.

The scene is a familiar one not just because it's a classic film and television trope (see also: any commercial where the bra-wearing protagonist is positioned to the audience as "relatable"). For people with boobs, it's a ritual: Arrive home, remove bra.

So, what happens when you're always at home? You never put one on in the first place.

"I hope as the world slides into vaccine summer everyone's ready to accept that we will not be going back to bras any time soon," writer Alanna Bennett posted on Twitter. "Everyone is going to have to learn to deal with some nips."

Yet contrary to the trending anti-bra sentiments on social media feeds, the past year of freedom from our lacey cages of oppression has not led to burning bras en masse, or even a significant drop off in bra sales. Relative to the women's apparel industry writ large — which was one of the "hardest hit" sectors of the pandemic, according to Kristen Classi-Zummo, director of market insights, apparel, at the NPD Group — bras fared well. (I don't want to call y'all who claimed to be done with bras liars, but …)

"Women's apparel was down 21% in dollars," she says. "But when we look at individual categories, intimates actually faired better when we compared it to total women's apparel — and especially when we looked at bras." In the second quarter of 2020 (April through June), she adds, bra sales were up. The catch? The categories responsible for driving these results included sports bras and bralettes. Underwire sales, however, were down.

These numbers are not surprising. Bralettes — loosely defined as bras lacking underwire and padding, and often made of lace or other thin materials — have been on the upswing for the better part of a decade. As Classi-Zummo explains it, the pandemic merely accelerated a trend that was already in motion.

"The trend toward wireless and comfortable sports bras started before the pandemic, and we continue to see that skyrocket as the focus on comfort remains top of mind," adds Ra'el Cohen, co-founder and CCO of intimates brand ThirdLove. While both Classi-Zummo and Cohen expect that the desire for comfort will outlast the pandemic, they believe that women will continue to wear at least some type of coverage on top.

"While some women have forgone wearing a bra, we don't believe that's the majority," says Cohen. "Customers might have shifted the styles they wear on an everyday basis, however if you're a certain chest size, it could be hard and uncomfortable not to wear a bra every day."

As a proud longtime member of the Itty Bitty Titty Committee myself, I have always found not wearing a bra the more comfortable state, save for very few occasions such as during high-impact exercise.

But since my first bra-shopping excursion as a pre-teen, my understanding of bras was that they are a necessary garment, like socks or underwear. Their purpose was not necessarily good hygiene, but support. Without them, I assumed, my boobs would be drooping around my knees by my early 30s, and my back in so much pain that I'd be unable to walk upright.

And yet. Throughout the pandemic, as women have become more accustomed to spending their days sans bras, their tatas experiencing a freedom unlike ever before, the long-established fact that bras aren't actually medically necessary has finally started to break through — especially for those of us in the IBTC.

The idea that women need bras to prevent saggy boobs? A myth. (According to this French study conducted over 15 years, wearing a bra can actually increase sagging. But also, who cares?) And for women with heavier boobs who feel relief from the support bras provide, it turns out that there are other ways of alleviating back pain caused by a heavy chest, from strengthening exercises featured in yoga and pilates, to massages, to a good-ol' fashion compression or sports bra.

Adele*, a 29-year-old from Ottawa who works in a management role in the fitness industry, found that traditional padded bras actually caused her pain, even after a proper fitting. "I notice I get pain in my shoulders a lot of the time, or going up my neck, or a headache," she says. Though as quarantine gave her more freedom to dress as she pleases, "I wore sports bras more, even bralettes, and [the pain] completely goes away."

According to this 2014 article in NPR (which notably features the phrase "over-the-shoulder boulder-holder"), the demise of the bra was predicted as early as 1969, when Danish fashion historian Rudolf Kristian Albert Broby-Johanse penned an "Obituary for the Bra," which he assumed would go the way of the corset any day now.

So why have we yet to embrace the #FreetheBoobies movement, discarding the idea of bras as easily as we discard actual bras at the end of the day? In a word, men.

"Quarantine has totally changed the way I think about bras because I don't wear them hardly at all anymore," Erin*, a 28-year-old from Seattle, tells me over Zoom. "Quarantine really opened my eyes — like, 'Oh, this is really restrictive and conforming and unnecessary and a patriarchal tool, so, no thanks.'"

Though, running around bra free presents a different set of conflicts once you leave the home.  "I'll run errands and not wear a bra and it feels amazing, but I still wear lots of layers because I don't feel super comfortable wearing a T-shirt and no bra," she continues. "It's a huge mental discussion everytime [I go out in public without a bra], because it's such an act of resistance to not wear a bra. The trade off is you risk getting ogled at by old men in the grocery store, or your checker getting weird on you."

This mental debate is a familar one for women and girls who came of age in a victim-blaming culture, where too-short skirts means she's "asking for it," and girls in tank tops are "distracting their male classmates.

"There's another element where it's like, 'I don't care if you look, this is my body and you're the one doing the sexualizing. So fuck off,'" says Erin.

Awareness of the fact that being a person with boobs does not mean others have a right to make you feel uncomfortable, however, doesn't do much in the moment when you're being hit on by the checker at the grocery store. And it's this gray area — of wanting to be free, but also wanting to be (relatively) unbothered — that seems to be the biggest hang up for women who are ready to break up with their bras for good.

My own relationship with bras has also changed over the years — especially as a woman privileged enough to not draw too much attention to Things 1 and 2 (what I call them on occasion), size-wise. While navigating the appropriateness of nipples — ahem — announcing themselves at work isn't territory I'm ready to explore, going bra free for a night out is par for the course.

And there is still something to be said about the sex appeal of a quality lacey, balconette bra for when I am actively choosing to invite the attention of a significant other. But as bra-wearing people will tell you, those aren't often intended to stay on for too long.