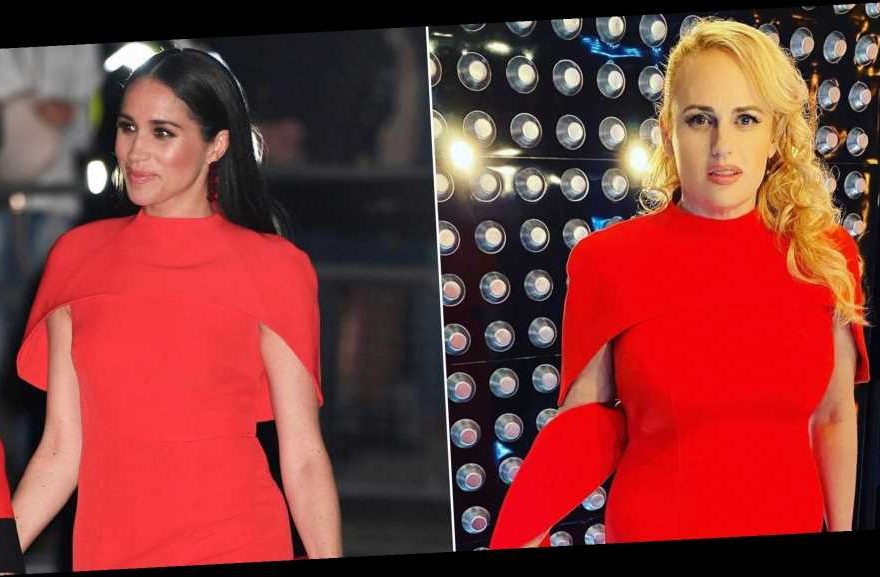 Seeing double! Rebel Wilson celebrated Super Bowl LV weekend in style and showed off her slim figure in a dress that might look a little familiar to fans of the British royal family.

Rebel Wilson’s Transformation Through the Years

“Loving myself SICK in this dress!” the Pitch Perfect star, 40, captioned a series of Instagram pics on Saturday, February 6, one day before watching the Tampa Bay Buccaneers defeat the Kansas City Chiefs in Florida.

Wilson struck a pose in a bright red Safiyaa gown that was fitted at the waist and sported a bold collar. In March 2020, Meghan Markle wore the same dress to the Mountbatten Festival of Music, one of her final public engagements before she and Prince Harry officially stepped down from their senior royal duties.

The Isn’t It Romantic actress gave her social media a glimpse at her Super Bowl festivities while following social distancing guidelines amid the coronavirus pandemic. “Ready for a great game! #superbowllv,” Wilson wrote via Instagram on Sunday, February 7, alongside a photo of herself and four cheerleaders, all of whom wore masks to keep themselves and others safe.

Inside the stadium, the Australian actress reunited with Pitch Perfect costar Adam Devine. “My favourite work husband,” she teased.

Wilson’s busy weekend comes shortly after she revealed in an Instagram caption on Tuesday, February 2, that she was single after less than one year of dating Jacob Busch. A source later told Us Weekly exclusively that the Anheuser-Busch brewing company heir was “blindsided” by the breakup.

Who Wore It Best? Celebs Wearing the Same Fashion Styles

“They went to Aspen right before the holidays and had a blast. Then, he left for Florida to be with his family, and he invited her because he really wanted her to meet [them] but she never committed to doing that,” the source told Us. “They talked all throughout the holidays and had excellent communication, but then, all of a sudden, she got really quiet and broke up with him via text message about two or three weeks ago.”

While Busch was “really upset” over the split, the insider added that he has “no ill-will toward” Wilson.

The exes made their red carpet debut together in Monaco in September 2020 shortly after Wilson began featuring Busch on her social media accounts. A source told Us at the time that the pair were getting “serious” and that the businessman “adored Rebel last year before she went on her health journey.”

Over the last year, Wilson has made some big changes to her routine that resulted in a 61-pound weight loss. After committing to her “year of health,” the Cats star opened up about how people have treated her differently since she slimmed down.

“Sometimes being bigger, people didn’t necessarily look twice at you. And now that I’m in a good shape, like, people offer to carry my groceries to the car and hold doors open for you,” she said during an interview on The Morning Crew With Hughesy, Ed and Erin in January. “I was like, ‘Is this what other people experienced all the time?’”