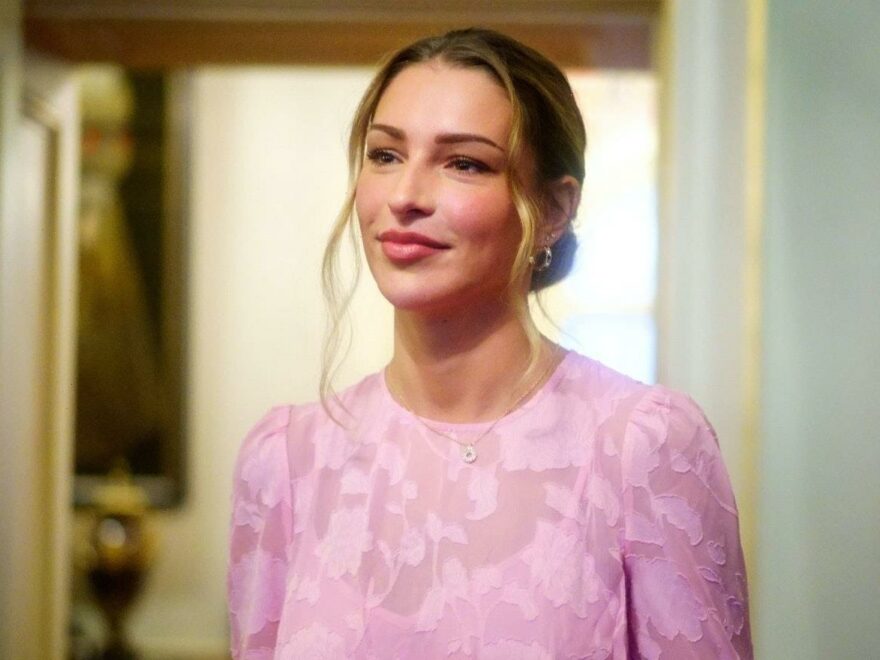 Following a succession of documentaries that explore heavy-hitting subjects, Zara McDermott goes head-first into the world of eating disorders for her next exploration. Zara spoke to Stylist’s Jessica Cullen about some of the sobering things she’s learned in the process.

Whether she’s producing content for her 1.7 million Instagram followers or presenting on BBC Three, McDermott spends a lot of time holding a magnifying glass to some of the murky topics that haunt our society.

When I spoke to McDermott, she was in the midst of a busy school tour with the BBC’s young reporter team, travelling around the country to hit six schools in three days to educate and inspire young people to pull down the stigma surrounding eating disorders.

Over the course of filming, McDermott worked with a variety of experts and charities, including BEAT, the Maudsley Hospital, the Schoen Clinic and a variety of consultants, to gain and provide accurate information about a disease we still know so little about.

Here, she gives Stylist an insight into what inspired her to dig into this world and some of the things she’s learned along the way.

You’ve previously worked on documentaries that have covered some very heavy topics. What made you want to take a look at eating disorders for your next project?

ZM: I was in the middle of filming Uncovering Rape Culture, which is my second documentary, and I was still posting on A Day With Zara (McDermott’s second Instagram account) and taking my own fitness journey. I think we’d just come out of a lockdown. I noticed that there was a massive boom in fitness and diet culture over the last year and I decided I wanted to do a film about it.

I realised how obvious it was to me – how clear it was to me – that so many people were struggling with disordered eating and didn’t know and, to be honest, at the time, I didn’t know they were struggling with disordered eating, but I could see that there was a problem. There was a kind of obsession over diet culture. I was posting a lot; a lot of people want to see my content, and it kind of got to a point where I was like, wow, there is a really, really big demand for this kind of content. How much longer should I adhere to it? How much longer should I keep going with this before I start to ask questions myself?

This documentary was an opportunity for me to start asking those questions and reflect on myself, on the way that I’ve been sucked into diet culture in a different way. I am feeding the consumer — where does my responsibility sit and how can I be more reflective?

When you left Love Island, you ended up losing quite a bit of weight. And you documented that journey, which led to some criticism because people thought that it could potentially be quite triggering. Do you think part of that is because you grew up in a generation where weight loss is not only documented but celebrated? Do you think behaviour like that is instinctive?

ZM: Yeah, totally. I think that all of us have been conditioned to feel like weight loss is a good thing. Hence why I even thought to post it in the first place.

My boyfriend makes a good point in the film: if you want to embark on your own health and fitness journey, if you want to lose some weight in a healthy way, that’s OK; that’s your choice. But you don’t always have to celebrate that online. I thought that was a really good point. That’s something that we all celebrate online. All of my friends who lose weight or go on fitness journeys – as soon as we can, we post about it.

I think that shows [how] it’s so ingrained in our society, in the media and the press. The press is also guilty of celebrating a woman who loses weight and posting articles about it. It’s just so [embedded in] our culture. So I think it’s a lot more skin-deep than just “influencers are causing the problems”. I think it goes a huge amount deeper than that.

Obviously, digital culture has a big part to play: social media, vlogs and things like that. But do you think seeing so much of it on TV and in influencer culture has made it a bit harder for the younger generation to not necessarily avoid it, but not have to think about weight loss and body image so much?

ZM: It’s plastered in front of us all the time – pictures of other people. It just forces us to compare what we look like with someone else. It’s in front of our eyes and on our phone screens all the time.

I personally never felt the pressure from reality television itself and being on it. It’s the people online, the digital space, that is, in my mind, the most harmful place and perpetuating that culture.

It’s something we looked at a lot in the documentary – girls being forced to compare themselves to other girls online. Naturally, if we didn’t have any phones, I’m sure we would all compare ourselves to someone walking down the street We’re always going to compare ourselves and we probably have done for centuries, but this is a whole new era where it’s in front of our face all the time. And it was only a matter of time before it was going to cause this huge problem in diet culture that we see now.

ZM: A fact that I learned during the filming process that really shocked me was that 85% of people with an eating disorder are not underweight. That really does say it all to me. I think that there is a stereotype that – and one of the consultants in the film spoke about this – eating disorders only affect young white women, and that they’re going to appear in a certain way. And actually, that is completely not the case — eating disorders can affect anyone and everyone.

There are lots of eating disorders out there. It’s not just anorexia. There’s bulimia, binge eating, binge restricting, a purge, ARFID (avoidant restrictive food intake disorder), there are so many.

It makes you, after watching the film, more aware that that person you could be walking past down the street has an eating disorder, yet it’s invisible to you. It shows that eating disorders are invisible 85% of the time.

Were you able to find a decent amount of information and guidance from experts while making the film that helped you work through this world?

ZM: We speak to a lot of experts in the film, a lot of doctors; it’s really, really important that you do that when making a film like this. Because you need to present the facts and you need to really bring awareness to a lot of these issues [around] eating disorders from a really clinical fact-based perspective.

The film is extremely emotional. I’ve been on a schools tour this week and it’s been really emotional for a lot of the students. It definitely brought up some feelings for them. For me, I was quite surprised to see just how many were struggling or had struggled and how many related to it. It is really important that you create a space within a film like this where people can see that they can get help.

It’s really important that you get those experts in to tell anyone who’s watching where they can get help, and we also show how that help works and actually show one of the group therapy sessions.

You said that people tend to think it’s just young women that are affected by eating disorders. Did you see a different reflection of that having visited these different schools and are you seeing a variety of young people showing interest or indicating that they’re suffering too?

ZM: You do see it across the board. I do think that there is still this massive stigma around men vocalising that they’re suffering from an eating disorder. I was speaking to a teacher about this, and he was saying the male gym culture about being really ripped and strong is perpetuating eating disorders in men, and men aren’t speaking about it.

It’s interesting because I had quite a lot of boys ask me questions in the Q&A session, but at the end of the session, they’d make a quick getaway, and the girls would come and speak to me about the film or what they thought about it after it finished.

I definitely think that among those crowds, there were a lot of young men suffering in silence, and a film like this can start to break those stigmas and stereotypes and show that it’s OK to talk about these things.

Doing this school tour, and based on your experience working in the Department for Education, do you think that there’s anything practical that we can do to try to get to the root of the problem?

ZM: There are so many things we can start doing. As a consumer, you can obviously unfollow or block any accounts that you may find triggering. You can also update your preferences, especially on TikTok. You can update your algorithm. Tell TikTok you’re not interested in seeing certain content, such as What I Eat In A Day videos. That’s a simple thing you can do – to start controlling your algorithm. That’s one thing we looked at – being a victim of the beast of the algorithm.

Also, I hope this film creates a bit of a checklist for influencers when uploading content. Like: how could my content be triggering? I think influencers watching this film might be able to see where things can go wrong with certain pieces of content. Why they might not hit the right note. I think it’s really hard as an influencer – when you’ve not suffered from an eating disorder or you don’t understand the topic – [to understand] why something might be triggering.

And I think the film really does tell you how to get help if you need to. I would always urge [anyone who is struggling] to call the charity BEAT. They’re a fantastic charity. They are a real undercurrent of the film. They helped us make the film into what it is. They’re incredible and they’re always there to give advice to anyone who may be struggling or know someone who is.

Disordered Eating will be released on 22nd November at 9pm on BBC Three.