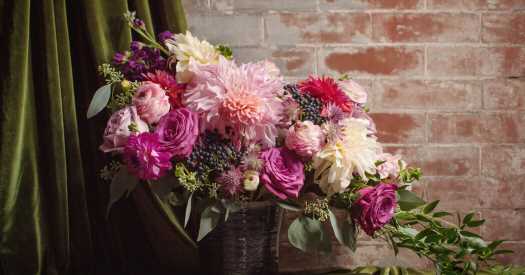 Welcome to the T List, a newsletter from the editors of T Magazine. For this week, we’ve turned it into the second installment of our Valentine’s Day gift guide, with recommendations from T staffers and contributors on what to give your loved ones — or yourself. Read the first edition here, and sign up here to find us in your inbox every Wednesday. And you can always reach us at [email protected]. 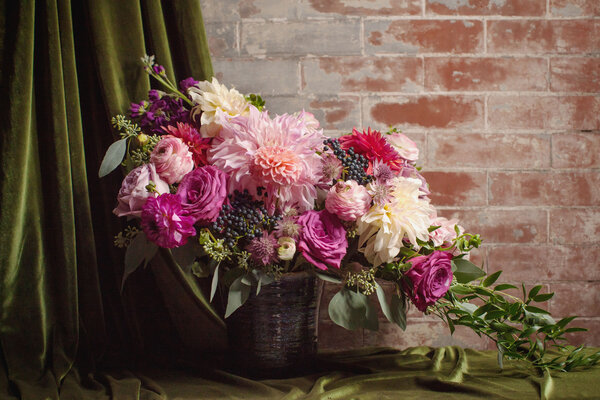 For years, Robbie Fairchild, a former New York City Ballet principal turned Broadway star, received flowers for a great performance. In 2017, when he was the lead in the London production of “An American in Paris,” his apartment was next to the Covent Garden Academy of Flowers, and he eagerly enrolled in a class. He found working with flowers to be therapeutic, and in the best way, not unlike dancing. “Arrangements are all about balance and movement,” he says. “And you spend all this time creating something to present to the recipient.” That’s what happened last March, when a fan who works for a flower distributor in the Netherlands sent a large box of fresh roses and peonies to Fairchild in New York and he spun them into bouquets for health care workers. He then realized that, with theaters dark, the hobby might also be a chance to support another group in need: He launched the floral studio Boo-Kay NYC, and soon brought on Adam Perry, a fellow performer who’d assisted florists between stage gigs, along with three others with Broadway ties. The team works out of the ground floor of Fairchild’s Upper West Side duplex, which is now complete with a 5-by-5-foot walk-in refrigerator housing stems from the Netherlands and Manhattan’s flower district. Fairchild hopes that Boo-Kay NYC will continue to provide a source of income — and a creative outlet — for its workers even after theaters reopen. For Valentine’s Day, it’s offering make-your-own arranging kits, as well as the Valentine, a bouquet with red roses, pink trumpet tulips and feathery wisps of dried eulalia. “We’re really leaning into the theatricality,” says Fairchild.

Fragrances Inspired by Gambia and Sweden

As a design and photography student at University of the Arts London, Maya Njie would often incorporate scent into her work, adding fragrances to her images to communicate “how a place or environment smells,” she says. After graduating in 2012, she began making her own blends and launched her namesake fragrance line in 2016. Mixed in small batches and bottled by hand in a studio near Njie’s home in East London, her light, unisex scents draw on her Swedish and Gambian heritage. Nordic Cedar, which has notes of patchouli and Virginian cedar wood, was influenced by the forests of her hometown, Vasteras, and also includes cardamom, an ingredient often found in Swedish cooking that Njie describes as “so ingrained in the Scandinavian way of living, I can’t imagine home without it.” Tobak, meanwhile, is a warm and comforting fragrance with notes of tobacco leaf, tonka, cinnamon and leather that reminds the perfumer of visiting her grandfather’s apartment in Sweden as a child. Tropica is as it sounds: reminiscent of an exotic holiday, with hints of citrus, pineapple, coconut and sandalwood. And for something a bit more seasonal, this winter, Njie collaborated with the Los Angeles-based fragrance company Scent Trunk on a woody floral blend that took inspiration from Macedonia’s Pelister National Park, and features earthy aromas such as those of birch leaf, orris, violet leaf and tree moss. While the fragrances’ inspirations are personal to their creator, though, the scents are just as transporting for wearers.

The Nunchi cakes jiggle and wobble. They come in childish colors from slime green to pastel pink, and feature decorative fruit and nature motifs. This is the wildly inventive and Asian-inspired work of Lexie Park, the Korean-American food artist, who, after the pandemic started, began sharing her homemade jelly cakes (made entirely out of agar, which is derived from algae, and vegan; her jelly cheesecakes are made with gelatin) with friends in Los Angeles and on Instagram. “It just picked up exponentially,” she says of her fledgling business, which she officially started in 2019. “Everyone started to want to treat themselves, and they would message me, asking for desserts.” And so Park has remained busy, producing some 200 slippery confections herself a month, as well as making the desserts for the designer Humberto Leon’s new Eagle Rock restaurant, Chifa, and developing a soon-to-be-launched home and cook-wear line. “It will look like if Animal Crossing, Cooking Mama and Sanrio had a baby,” she says with a laugh. The name Nunchi comes from a Korean word that isn’t easy to translate. “Korean parents use ‘nunchi’ a lot when they’re scolding their children. It’s like common sense tied with emotional intelligence. Have you ever seen an Asian home where everyone is helping in the kitchen? That’s nunchi.” For Valentine’s Day, Park has teamed up with the floral studio Brrch Flowers, meaning one can now buy a special pairing of a Rosey Raspberry cheesecake with an Eternal bouquet of preserved grasses and fern with an assortment of bows and beads, through Nunchi’s Instagram (for pick up in Los Angeles), and 20 percent of proceeds will go to FreeFrom, a nonprofit dedicated to fighting gender-based violence.

Limited-Edition Plates Made From Fused Glass

About four years ago, the French industrial designer Fabien Cappello started experimenting with off-cuts of brightly colored glass that had been lying around his Mexico City studio, fusing the oddly shaped pieces in an oven to craft three-dimensional studies in pigment and process. The technique quickly became one of many in Cappello’s ever-expanding wheelhouse, and last year, when the British magazine Modern Design Review tapped the designer, now based in Guadalajara, to produce a limited run of decorative objects for its fourth annual collaboration with the Swedish design brand Hem, he immediately turned back to those initial creations. The result is a series of 15 delicately curved plates in shades of lilac, sage and aquamarine, jeweled with opaque geometric forms in school-bus yellow, molten tangerine and luminescent charcoal gray. The pieces, which might function as fruit bowls or simply as beautiful objets d’art, suggest broken shards of pottery gone radioactive, and are reminiscent of the mosaics of shattered tiles found in thresholds, stairways and floors across Mexico. Fused glass is a relatively new technique here, the designer says, “mostly used for decorative crosses, picture frames, things like that.” But like so much of Cappello’s work, these plates look less to handicrafts than to the country’s rich tradition of reuse and reinvention, playing with the boundaries between artisanal and industrial, utilitarian and decorative, and perhaps erasing those lines altogether.

A Short Film for a Long Year

By now, many of us have burned through every season of any television series available. So if you’re desperately searching for something different to watch or do this weekend, why not try screening a short film? “Sincerely, Erik,” written and directed by the first-time filmmaker Naz Riahi, and chosen by Vimeo as one of its best films of 2020, is a love letter to New York City — and to literature. Following a lonely bookseller whose West Village shop has been forced to close temporarily because of the pandemic (the part is played by Erik DuRon, the real-life co-owner of Left Bank Books), the story explores how individuals — particularly those who are uncoupled — are navigating forced solitude. “This film required me to be vulnerable as a single New Yorker, sheltering in place,” says Riahi. “I had to say out loud, ‘I’m lonely,’ and show that onscreen.” But much like taking a long, hot bath, watching a good film can feel restorative — and even more so when you’re alone.

A Perfect Lipstick for Every Skin Tone

For most, this Valentine’s Day won’t include romantic dinners out or get-togethers with friends — but that doesn’t mean we can’t find small ways to celebrate. Recently, I’ve noticed that wearing red lipstick, if only for Zoom meetings, infinitely brightens my spirit. Finding exactly the right hue can be difficult, though. For one thing, the beauty industry has long catered primarily to those with fairer complexions, often leaving people of color to mix their own complementary shades. To remedy that, KJ Miller and Amanda E. Johnson, the founders of the New York-based Mented Cosmetics, created three different reds that each work best with a specific undertone: yellow, blue or black. To determine your optimal shade, Miller suggests referencing your most flattering jewelry. If you look best in silver pieces, you likely have a cooler complexion and should try Red Carpet, which has a bluish tinge. If you prefer gold, opt for Red and Butter, which has yellow undertones. And if in doubt, try Red Rover, a dark, berrylike shade that works well for nearly everyone. Some of my other favorite reds include Lisa Eldridge’s classic Velvet Ribbon lipstick, which has a slight sheen, so lips really do look velvety, not flat; the cherry-hued Cool Gloss from Jones Road, Bobbi Brown’s new makeup venture, which has a refreshing, minty scent; L’Oréal’s Shiny Lip Stain, whose glossy finish makes it perfect for all-day wear; and Live Tinted’s Huestick, a four-in-one product that can be used as a blush, eye shadow, lipstick and color corrector. La bise might be a thing of the past, but red lips most certainly are not.

A Capsule Collection for Versatile Dressing

It’s the rare fashion editor and writer who can translate her impeccable eye into a global brand, but that’s what Elin Kling did when she founded Totême with her now-husband, Karl Lindman, in 2014. The Stockholm-based line appeals to those who dislike a design twist for its own sake but are nonetheless in want of clothes that feel chic, rather than sensible or severe. To celebrate adding the brand to its offerings, the German retailer Mytheresa has partnered with Kling and Lindman on a nine-piece capsule collection that revisits some of their most iconic styles. Included are wide-leg jeans in either white or raw denim, a pale-blue cashmere cardigan with black-and-silver buttons, and a cream-colored, smocked polyester tracksuit comprising a collared button-down and tapered elastic-waist pants. “The pants could almost be an evening piece — or you could wear them to the beach with a bikini,” says Tiffany Hsu, Mytheresa’s fashion buying director. Her words have me looking forward to the days when I’ll need to get dressed in a real way again, not least because that will mean the world has become safer. And these pieces, which telegraph optimism in their palette and the mere fact of their existence without straying too far from the comfort level to which we’ve grown accustomed, seem like ideal ones to wear as we anticipate re-entry.