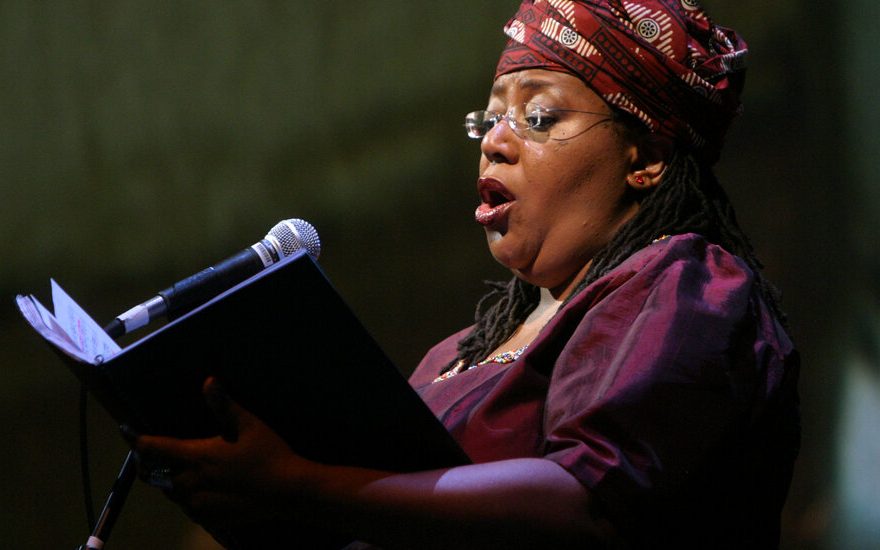 Sibongile Khumalo, a virtuoso vocalist whose ease of motion between opera, jazz and South African popular music made her a symbol of the country’s new social order after the end of apartheid, died on Thursday. She was 63.

Her family wrote on Instagram that the cause was complications of a stroke, and that she had endured a long illness. The post did not say where she died.

Fleet and precise across a wide vocal range but particularly elegant in the upper register, Ms. Khumalo’s voice had the hall-filling power of an operatic mezzo-soprano and the directness of a pop singer. After making her debut as Carmen in a production in Durban, she earned wide acclaim for her roles in South African operas and plays, including “UShaka KaSenzangakhona,” “Princess Magogo KaDinuzulu” and “Gorée,” all of which toured internationally.

At home she was equally known for her catchy original compositions and her renditions of South African jazz standards like the straight-ahead anthem “Yakhal’ Inkomo,” written by the saxophonist Winston Ngozi, which became a calling card.

When the apartheid government fell and Nelson Mandela became the country’s first democratically elected president in 1994, Ms. Khumalo performed at his inauguration. Mandela famously referred to her as the country’s “first lady of song,” and the title stuck.

The next year, when South Africa went to the Rugby World Cup — a moment of national reconciliation later immortalized in the film “Invictus” — Ms. Khumalo was invited to perform both her home country’s national anthem and that of its opponent, New Zealand. It was “the one and only time I’ve ever watched a rugby match, at any level, of any kind,” she told a television interviewer in 2017, laughing.

In 1996 Sony released her debut album, “Ancient Evenings,” which included a number of originals and loosely adhered to a vocal-driven South African pop style. Over the next two decades she would release a steady stream of albums, earning four South African Music Awards. For her stage performances, she garnered three Vita Awards.

In 2008 she received the Order of Ikhamanga in silver, among the country’s highest honors for contributions to the arts.

Sibongile Mngoma was born in Soweto on Sept. 24, 1957, to Grace and Khabi Mngoma. Her mother was a nurse; her father was a scholar and musician who helped found the music department at the University of Zululand.

Sibongile began studying at age 8 under a respected local music teacher, Emily Motsieloa, focusing on the violin. She was heavily influenced by the music of local healers and ministers at the nearby church, as well as the Western classical and pop records her parents played around the house.

She taught at Zululand, but she also sought opportunities to reach children who lacked access to major institutions. She held teaching and administrative positions at the Federated Union of Black Artists Academy in Johannesburg and the Madimba Institute of African Music in Soweto.

Ms. Khumalo’s husband, the actor and director Siphiwe Khumalo, died in 2005. The couple had two children, Ayanda and Tshepo Khumalo. A full list of survivors was not immediately available.

In 1993, she won the Standard Bank Young Artist Award at the famed Grahamstown National Arts Festival, and her star rose swiftly. She had already begun turning heads with a concert program, titled “The 3 Faces of Sibongile Khumalo,” that showed off her versatility across genres. Those “faces” were jazz, opera and traditional South African music.

When Ms. Khumalo was a girl, her father had brought her to see Constance Magogo kaDinuzulu, a Zulu princess and musician known for her prowess as a singer and composer. “My dad made me sit at her feet to listen to her play ugubhu and sing,” Ms. Khumalo wrote in the notes to her self-titled 2005 album, referring to a Zulu stringed instrument. “I thought he was being very unkind to me because all the other children were out in the yard playing.”

But decades later, she drew upon the experience when she collaborated with the scholar Mzilikazi Khumalo (no relation) to create “Princess Magogo KaDinuzulu,” billed as the first Zulu opera, centered on the princess’s own compositions. “It must have been destiny,” she said. “In my professional years the music came back and it began to make sense.”

In a 2019 interview ahead of her performance at the Joy of Jazz Festival in Johannesburg, Ms. Khumalo said that no matter the symbolism, her main commitment was to the singularity of her own voice. “While exposing yourself and opening yourself up to what is out there, it is also important to remain true to yourself, so that even when you allow yourself to be influenced by others, you retain an identity that clearly defines you,” she said.

Whatever the subject matter, she added, “it is the truth in what you express, and how you express it, that is paramount.”