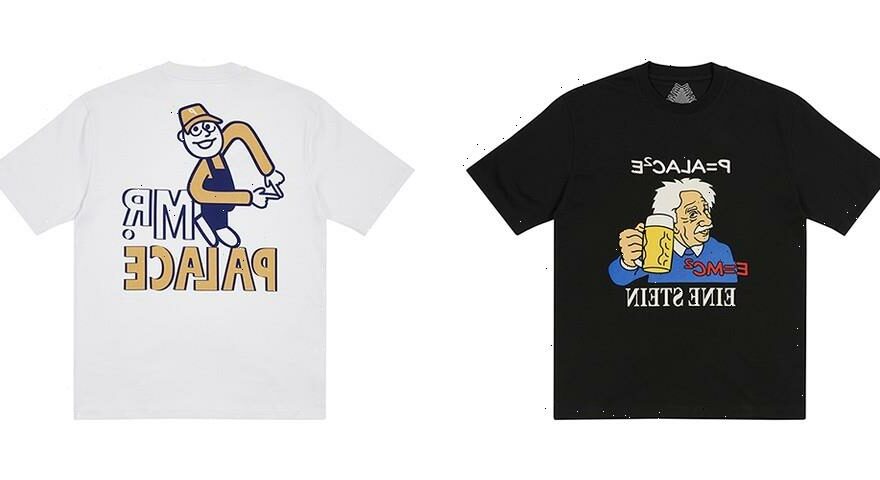 Following on from the debut of its eclectic Winter 2021 lookbook and a sustainably-minded adidas capsule, the London-based skateboarding imprint Palace is back with a new collection of tees for the upcoming season.

As per usual, Palace puts a heavy presence on graphics and overt logo placement across both short and longsleeve T-shirts, with notable designs include the superhero-esque “P-SONIC” tee that features a character holding a Palasonic-branded camera, while its moniker graces plenty other tees with the “Fun Guy” top being a particular standout, seeing its logo feature mushroom characters interwoven with the letters.

Elsewhere, a genius “Eine Stein” T-shirt appears in a myriad of colors in a matching theme to the knitted cream jumper that was seen in the lookbook, showcasing the physicist holding a pint alongside the apt logo tweak that reads “P=ALAC2E.” Rounding out its range of seasonal tees are a host of Tri-Ferg pieces, appearing as an iceberg, bubbles, and among a stormy lightning strike piece.

Take a look at the entire range of Palace Winter 2021 T-shirts above. The first drop of Palace’s Winter 2021 collection is set to release on October 15 in the U.K. and U.S. via the brand’s online webstore and in-store, while an October 16 drop is set to follow in Japan both in-store and online, as well as via the Palace WeChat channel.