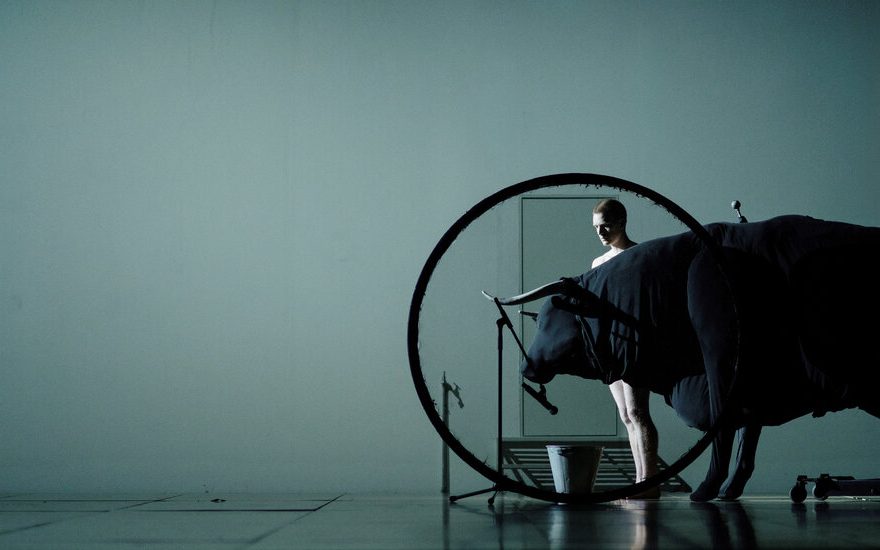 LYON, France — A million euros wiped off the budget. Large-scale shows canceled. And an elaborate parade through the city — an event that had been drawing crowds of around 250,000 people — dramatically rethought. Despite these obstacles, the 19th Lyon Dance Biennale became, on June 1, the first summer festival to open in France, less than two weeks after the country relaxed its Covid-19-related rules — a little.

“We are still at reduced capacity, still have a 9 p.m. curfew, still can only eat or drink outside,” said Dominique Hervieu, the director of the Biennale, one of the most important dance festivals in Europe. “But I was determined that if we were opening up at all, the festival would take place.” (Some of these restrictions are set to be loosened on Wednesday; the Biennale runs through June 16.)

Hervieu, who had to cancel the festival in September (when it usually takes place), said she had shortened its duration and cut some of the more expensive and logistically complex programming. A priority, she said, was to retain a new project, “L’Expérience Fagor”: a dense compilation of free performances, workshops, dance classes and digital interactions in the 29,000-square-meter Fagor factory, where washing machines were once made.

“People ask, ‘When you have lost money, why do something free?’” Hervieu said. (The Biennale’s budget was reduced to €7 million, or $8.5 million, from €8 million after sponsors withdrew and box office projections were dramatically reduced.) “But after Covid, there are lessons to draw about solidarity, about the democratization of art, about listening to young people at a moment when society is in crisis.”

Most of the 32 companies on the main program this year are based in Europe, but around 100 African artists joined — part of a countrywide French Institute program, Africa 2020. Many came to participate in the parade, which this year had a theatrical format in place of a street procession. Short Africa-inspired pieces were presented by 12 groups to a limited audience over two days in the huge open-air Ancient Theater of Fourvière, which dates back to 1 B.C.E. (Roselyne Bachelot, the French culture minister, was sitting on the stone seats at Saturday afternoon’s opening presentation).

The festival lost some premieres (Angelin Preljocaj’s “Swan Lake” among them) to pandemic logistics, but gained others. Dimitris Papaioannou’s “Transverse Orientation” should have opened in the prestigious Cour d’Honneur at the Avignon Festival last year. Instead, its premiere, probably the most important of the Biennale, was in Lyon last week.

Papaioannou, who began his artistic life as a visual artist and has worked with the director Robert Wilson, has had a slow rise to international fame. “Transverse Orientation” confirms it’s merited. 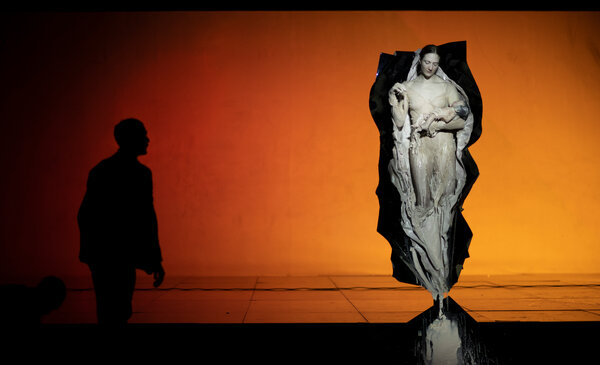 Like all of Papaioannou’s pieces, it’s a meticulously crafted, intensely visual experience. The set (by Tina Tzoka and Loukas Bakas) is a plain white wall punctuated by a narrow door and an intermittently flickering, buzzing fluorescent light. This provides a blank canvas for painterly lighting (by Stephanos Droussiotis) in a range of delicate colors, against which eight performers create an ever-shifting and often jaw-dropping range of images and tableaux — evoking visual arts, myth and religion.

A man reclines nude on a terrifyingly realistic bull, which the other performers appear to attempt to control; another man seems to have his penis wrenched off; composite male-female bodies are formed and dissolved. A naked woman (the beatific Breanna O’Mara) framed in a shell-like cocoon, looks like the goddess of Botticelli’s “Birth of Venus,” and shows another kind of birth as a slowly dripping bag held against her stomach gradually empties to reveal a newborn.

There is humor, too, in the tall, bobble-headed figures who open the work (later, one does a little tap dance), in the composite bodies, in the figures jostled by forces outside their control. Occasionally the action feels deliberately obfuscatory, like during the lengthy removal of the stage panels at the end, revealing a shallow lake, which a man tries to mop up — very Pina Bausch. But “Transverse Orientation,” at nearly two hours, is mostly a long act of artistic magic created before our eyes by the superbly precise performers.

Precision is also a key element in Yuval Pick’s “Vocabulary of Need,” set to various recordings and reworkings by Max Bruckert of Bach’s magisterial “Partita No. 2 in D minor.” It’s ambitious to pit any choreography against this score, and Pick — an Israeli-born, Batsheva-trained choreographer based in France — creates an eccentric, loosely flung, hoppy movement that at first doesn’t seem to make any attempt to match it. But gradually, a visual complexity accrues as the eight dancers surge in unpredictable on and off the stage. Through varying ensemble groupings and solos (bravo to Noémie De Almeida Ferreira and Julie Charbonnier), the piece slowly comes to feel like a kinetic complement to the music — no small accomplishment.

At the start of the pandemic, the director of the Lyon Opera Ballet, Julie Guibert, decided to initiate a project; the creation of 30 solos for the 30 company dancers. Seven have already been seen, and another five had their premiere on Saturday at Les Subsistances, a cavernous cultural center on the banks of the Saône River. (Despite cuts, Biennale events are taking place this year in 48 different theaters and 37 towns in the Lyon area, Hervieu said.)

The mood was rather gloomy. “Love,” a solo for Paul Vezin, by Marcos Morau, drew from circus and clown tropes, but took place in somber near-darkness. “La Venerina,” by Nina Santes for Elsa Monguillot de Mirman was a tedious mutant fantasy. The best pieces were Noé Soulier’s “Self Duet,” in which Katrien De Bakker tied herself in complex knots using ballet partnering techniques on her own body; Rachid Ouramdane’s “jours effaces” (“erased days”) for Léoannis Pupo-Guillen, a touching portrait of a man who seems to have lost touch with himself and the world; and Ioannis Mandafounis’s “Komm und birg dein Antliz,” an against-the-grain joyous celebration of movement for the marvelous dancer Yan Leiva.

This Biennale wasn’t the densely layered, frenetic event of past years. There was no rush from one performance to another, no post-performance conversations with artists, no chance for the many presenters and professionals at the festival to network over drinks or meals. But the show went on. As Germaine Acogny, the grande dame of African dance — who performed her autobiographical solo, “Somewhere at the Beginning,” on Friday — wrote in the festival program: “Dare. Dream. Sing. Dance.”