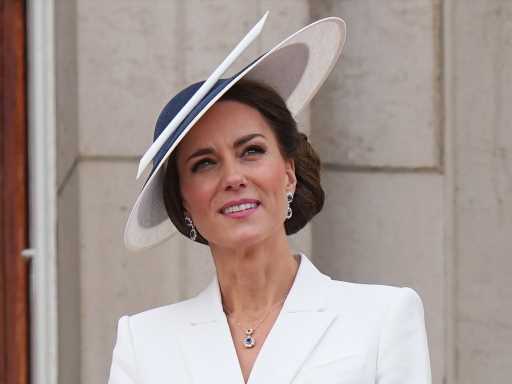 Today marked the first event for Queen Elizabeth II’s Platinum Jubilee celebrations. The long-reigning monarch, who’s commemorating 70 years on the throne, enjoyed the Trooping the Colour military ceremony while surrounded by her family, including the entire Cambridge contingent. Prince William, Kate Middleton, and their three children joined other working members of the royal family on Buckingham Palace’s balcony to watch the British Air Force’s fly-over, and we got a glimpse of how Kate honored her late mother-in-law Princess Diana with her Trooping the Colour ensemble.

Kate looked absolutely stunning in a blazer dress by Alexander McQueen, which she previously wore at the G7’s leaders reception in June 2021, per Harper’s Bazaar. She paired the ensemble with a navy and white hat, which seemed to match the color scheme of the royal family, who wore various shades of blue to compliment the queen’s outfit. But the most personal detail of Kate’s look were the earrings she chose to wear.

The Duchess of Cambridge wore a pair of sapphire-and-diamond earrings that previously belonged to Princess Diana. The sparkling jewels were the perfect accessory to the mother of three’s outfit. Plus, it made it feel like the late Princess of Wales’ presence was definitely felt during such an important occasion. You can clearly see them in the photo above, featuring Kate chatting with her youngest, Prince Louis — who arguably was the breakout star of Trooping the Colour.

The Duchess of Cambridge often uses opportunities to honor her late mother-in-law, just as Kate’s sister-in-law Meghan Markle does with her sartorial choices. We especially love how, during such a moment as the Platinum Jubilee, Kate chose an elegant piece of jewelry that represented Diana. As the Platinum Jubilee celebrations continue over the course of the next few days, we cannot wait to see other ways Kate chooses to honor Diana through her clothes and accessories.

Brothers and Wives: Inside the Private Lives of William, Kate, Harry, and Meghan by Christopher Andersen

The fraught relationship between the Cambridges and the Sussexes has been heavily scrutinized for the past few years. But we’ve never had quite a clear look at the relationship between Prince Harry and Meghan Markle and Prince William and Kate Middleton, until now. Longtime royal writer Christopher Andersen takes fans into the intimate conversations and exchanges between these two powerful couples in Brothers & Wives: Inside the Private Lives of William, Kate, Harry, and Meghan
, illustrating what was lost, gained, and what might be found as the next generation of the royal family embraces the future.

Brothers & Wives: Inside the Private Lives of William, Kate, Harry, and Meghan