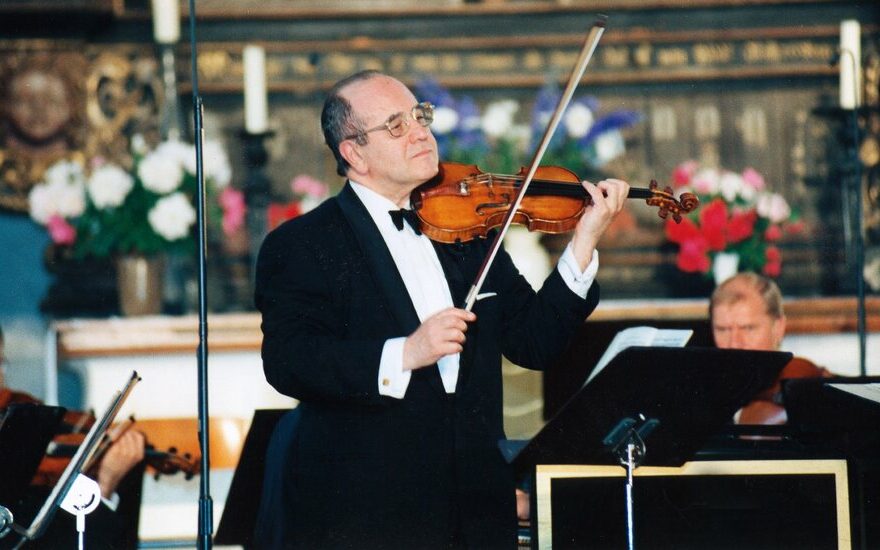 Igor Oistrakh, a noted violinist who was part of a violin-playing family that included his father, David, one of the 20th century’s finest exponents of the instrument, died on Aug. 14 in Moscow. He was 90.

His son, the violinist Valery Oistrakh, said the causes were pneumonia and heart problems.

Though much of his career coincided with the Cold War, Mr. Oistrakh was well known in New York and elsewhere in the West, since the Soviet Union sent its best musicians on tour. He made his New York debut at Carnegie Hall in February 1962 performing with Symphony of the Air under Alfred Wallenstein. Harold C. Schonberg, reviewing the concert in The New York Times, noted that few could measure up to David Oistrakh and pronounced Igor “a good violinist, though far from a great one.”

But by December 1963, Mr. Oistrakh had performed several more times in New York and had established himself as an admirable musician independent of his father.

“Little can be said about the 32-year-old Soviet musician’s superb artistry that has not already been said again and again,” Howard Klein wrote in The Times in a review of a Carnegie Hall recital that month. “His beautiful, silky tone, his effortless execution in devilish passages, his restrained yet powerful emotional thrust, were in evidence and were as stunningly projected as ever.”

Father and son frequently played together. When David Oistrakh made his American debut as a conductor, leading the Moscow Philharmonic at Carnegie Hall in 1965, Igor was the soloist for the Tchaikovsky violin concerto.

“David Oistrakh conducted like a proud father,” Theodore Strongin wrote in The Times, “giving his son all the leeway in the world and pacing the last movement up into a mad virtuoso fling. The sold-out audience loved it.”

After his father’s death in 1974, Igor Oistrakh sometimes performed with his son. He was often accompanied in performances by his wife, the pianist Natalia Zertsalova, and critics often remarked on their like-mindedness.

“One can sense them weighing every phrase,” James Allen wrote in The Scotsman, reviewing a 1999 performance at the Music Hall in Aberdeen, Scotland, “making minute adjustments, effortlessly setting up contrasts of tone and texture.”

Igor Davidovich Oistrakh was born to David and Tamara Ivanovna Oistrakh on April 27, 1931, in Odessa, Ukraine. He was studying violin by the age of 6. The household was, of course, immersed in music, and young Igor witnessed bits of history, including the time the composer Aram Khachaturian dropped by in 1940 to unveil the violin concerto he had written for David Oistrakh.

“He came to play it on our piano,” Igor Oistrakh told The Times in 2001. “He did not take his overcoat off. He did not even sit at the piano. He just played, very vigorously. He was so loud that my great-great-grandmother, my father’s grandmother, was scared awake from her nap.”

Mr. Oistrakh studied at the Central Music School and then at the Moscow State Tchaikovsky Conservatory. In 1949 he won top prize at an international youth violin competition in Budapest, and in 1952 he won the International Henryk Wieniawski Violin Competition in Poland.

He made his Western debut at Royal Albert Hall in London in 1953 and continued to perform all over the world in the Cold War era. International tensions occasionally intruded on his concerts, as they did in 1971 when, The Times wrote, a performance at Philharmonic Hall in Manhattan “was interrupted after the first piece by an unscheduled intermission during which security forces searched the hall for harassment devices that might have been planted by the groups that have been protesting the treatment of Jews in the Soviet Union.”

Mr. Oistrakh made many recordings and was a conductor and teacher, taking a post at the Moscow Conservatory in 1958. After the fall of the Soviet Union in 1991, he became a professor at the Royal Conservatory in Brussels for a time. At his death, he lived in Moscow.

His wife died in 2017. In addition to his son, he is survived by a grandson.

Mr. Oistrakh’s physical resemblance to his father was striking, so much so that Tamara Bernstein, reviewing a 1992 performance with the Toronto Philharmonic for The Globe and Mail of Canada, began by saying, “It is unnerving, to say the least, to see a late lamented violinist stride on stage to wild applause.”

In 1998 The Miami Herald asked him a question he must have confronted frequently: Did he feel overshadowed by his father?

“I think I’ve had a wonderful career of my own, playing with the best orchestras and conductors in the world,” he answered diplomatically, “and that I was lucky to have had such a great and wonderful father.”