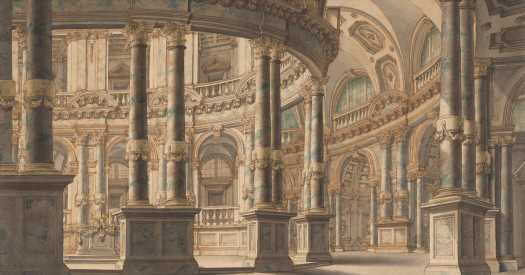 Many of us have not seen the inside of a theater in well over a year. But as performance spaces around the country are on the verge of reopening, the Morgan Library & Museum is offering a quietly astonishing reminder of what we’ve been missing.

Open through Sept. 12 at the Morgan, “Architecture, Theater and Fantasy” is a small but exquisite show of drawings by the Bibiena family, which transformed theatrical design in the 17th and 18th centuries. Organized around a promised gift to the museum of 25 Bibiena works by Jules Fisher, the Tony Award-winning Broadway lighting designer, the exhibit is the first in the United States of the family’s drawings in over 30 years. 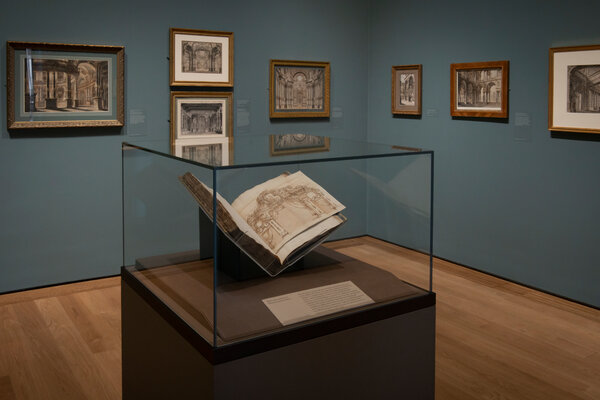 From Lisbon to St. Petersburg, Russia, the Bibienas dominated every major court theater in Baroque Europe. Their innovations in perspective opened new dramatic possibilities, and their lavish projects cost vast sums, with single spectacles running budgets of up to $10 million in today’s dollars. Writing to Alexander Pope of an opera performed outdoors in Vienna to consecrate the Austrian crown prince’s birth in 1716, Lady Mary Wortley Montagu described a massive stage constructed over a canal. Gilded flotillas sailed beneath it — a spectacle, she wrote, “so large that it is hard to carry the eye to the end of it.”

That production’s designer, Ferdinando Galli Bibiena (1657-1743), had arrived in Vienna in 1711 as the official scenographer for the Hapsburg court of Charles VII. His father, the Tuscan painter Giovanni Maria Galli (1618-65), came from a village in Arezzo called Bibbiena, and adapted its name as his own. Young Ferdinando started out in Bologna as a master of quadratura, or illusionistic ceiling painting. But his theatrical talents took his career in other directions in the 1680s.

The technique gained popularity over the 16th and 17th centuries, gradually taking over Europe’s indoor theaters during the Age of Reason. It gave designers a way to make a shallow stage space appear substantially larger, using only painted flats set in grooves that ran parallel to the proscenium.

The one-point “perspectiva artificialis” produced images of endless depth, like a single central street running away from the viewer. But in practice, the illusion only worked for one privileged spectator — typically an emperor or prince seated centrally in the auditorium. Everyone else’s view was distorted. What’s more, sustaining the trick kept actors largely downstage; if they moved toward the back of the stage, they seemed to become giants.

Sometime around 1687, Ferdinando began modernizing this convention. For a royal entertainment staged that April in honor of the Duke of Piacenza’s birthday, he rotated the vanishing point away from center stage, and added a second one on the other side of the playing space. Suddenly two vistas opened up.

Ferdinando’s two-point perspective allowed onstage scenery to be viewed as if at an angle, so the device came to be known as “scene vedute per angolo,” or simply “scena per angolo.” It opened the stage to a wider array of perspectives, and eventually became ubiquitous.

These images seem to draw their spectators into the picture plane by an almost gravitational force, pulling them across the proscenium threshold. They triumph in the virtual reality of theater. Actors could now more plausibly move around, and a wider range of viewers in the auditorium could get the scenic illusion without the risk of unintended anamorphosis, or visual warping.

One can only imagine how the sets looked in performance. Although the Bibienas commanded European stages for a century, their work survives today almost entirely in the form of sketches and renderings. Most of the more than a dozen theater buildings they designed eventually burned; the most notable exception is the sumptuous, recently renovated Margravial Opera House in Bayreuth, Germany, built in the 1740s by Giuseppe Galli Bibiena (1695-1757) and his son Carlo (1721-87). (Richard Wagner briefly considered it as the venue for his epic “Ring” cycle.)

Still, the drawings exude an irresistible sensuousness. Primarily in black and brown ink, busy hand markings trace rough motifs and ornaments everywhere, touching nearly every surface. Using wash or watercolor to create painterly effects, the drawings emphasize the allure of dreamy distances. (Or forbidding ones: One scenic sketch in the Morgan exhibit, a prison interior by Antonio Galli Bibiena, one of Ferdinando’s sons, seems to anticipate the labyrinthine “imaginary prisons” of Giovanni Battista Piranesi, who knew the Bibiena style well and may have even studied with the family.)

In several drawings, you get hints of the design process. “A Colonnaded Stage,” inked mostly in black, sports garlands that were drawn, later on, in brown. Some severed feet remain from a statue once collaged into the image, then removed partially — evoking, perhaps, experimentation with which set pieces to use. In “Left Portion of a Palatial Hall,” the viewer sees how three flat panels, labeled F, G and H, converge into depicting a three-dimensional portal.

While other architects and designers, like Andrea Pozzo and Filippo Juvarra, had been dabbling in multipoint perspective when Ferdinando made his innovations, the technique quickly became his brand, and international demand for his new style soon arose. Together with his brother Francesco (1659-1739) and his son Giuseppe, Ferdinando founded a sprawling family business, comprising a handful of major talents and a bunch of lesser-known ones.

The Bibienas enjoyed fame for a hundred years. Their heyday ended when tastes changed in favor of humbler settings in the middle of the 18th century. The designs linger like lovingly preserved ruins, fragments of a lost world. As the art historian A.H. Mayor once wrote, the family was “heir to all the Baroque, all that Bernini and Borromini had dreamed but had had to leave undone.” Those earlier artists had practically invented Baroque theatricality in their sculptural and architectural works, but the Bibienas translated it into stage décor. What’s more, they made it go viral.

“At their drawing boards,” Mayor wrote, “unhampered by the need for permanence, the cost of marble, the delays of masons, the whims or death of patrons, the Bibienas, in designs as arbitrary as the mandates of the autocrats they served, summed up the great emotional architecture of the Baroque.”

Joseph Cermatori, an assistant professor of English at Skidmore College, is the author of “Baroque Modernity: An Aesthetics of Theater,” which will be published in November by Johns Hopkins University Press.