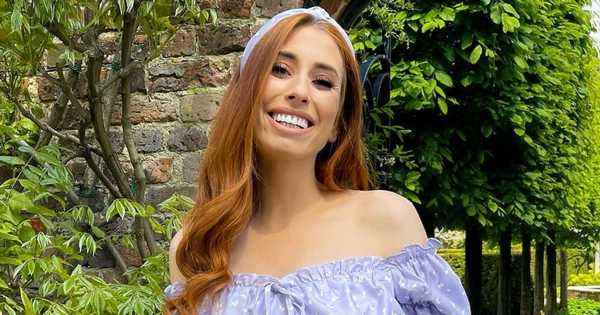 A psychic who has previously predicted two of Stacey Solomon's pregnancies revealed that her new baby will be born a girl in unearthed footage.

The psychic appeared on Loose Women back in 2017, telling Stacey that she will have another baby and a ring on her finger.

The panellist announced that she's expecting her fourth child on Wednesday, her second with fiancé Joe Swash.

In unearthed footage from the ITV daytime show, Stacey's engagement and pregnancy were predicted by psychic Sally Cudmore.

Sally told Stacey on the show: "I am going to your stomach area. I know you are a little bit hesitant. I can see pink for a girl around you. A pregnancy…"

Stacey was taken aback and replied: "No, no, no."

She was 27 years old at the time and had not yet fallen pregnant with son Rex.

Sally added: "I am not saying (you are pregnant) now. They don't give time limits, in spirits."

She continued: "Also there's a ring going on your finger," to which Stacey delightedly squealed: "Finally!"

Stacey got engaged to Joe in December, just as psychic Sally predicted.

And Stacey is expecting a baby at around the same time as her engagement, also predicted by the psychic.

Sally spoke to The Sun after appearing on Loose Women, saying: "I told her she was going to have a baby, but she was having none of it. She was happy about the engagement, but not the pregnancy.

"I left that day knowing I was right, and that time would tell. I'm really happy for them. Secretly that's what she wanted all along."

Excited Stacey shared a lovely black and white montage of her early pregnancy on Instagram, including pictures of her first scan, with fiancé Joe filming.

Stacey is currently mum to three beautiful boy, with Zachary, 13, and Leighton, nine, from previous relationships, and two year old Rex who she shares with Joe. Joe, who admitted he "can't wait" for the new baby, is also father to his son Harry, 13, who he shares with ex fiancé Emma Sophocleous.

Stacey hasn’t yet shared her due date, but it’s believed that she's around 13 weeks pregnant.

The couple shared their happy news on social media, but admitted that it hadn’t been an easy ride with "quite a few losses" along the way.

She wrote: "We decided we were so lucky already to have our boys. It is our biggest privilege in life and we are so grateful to be parents so we stopped trying and counted ourselves so so so blessed already."

She continued: "For a while now I’ve felt so yuck and even though I thought about what it felt like, I didn’t even want to go and check at first because well, just because, you know (I don’t even like to write it).