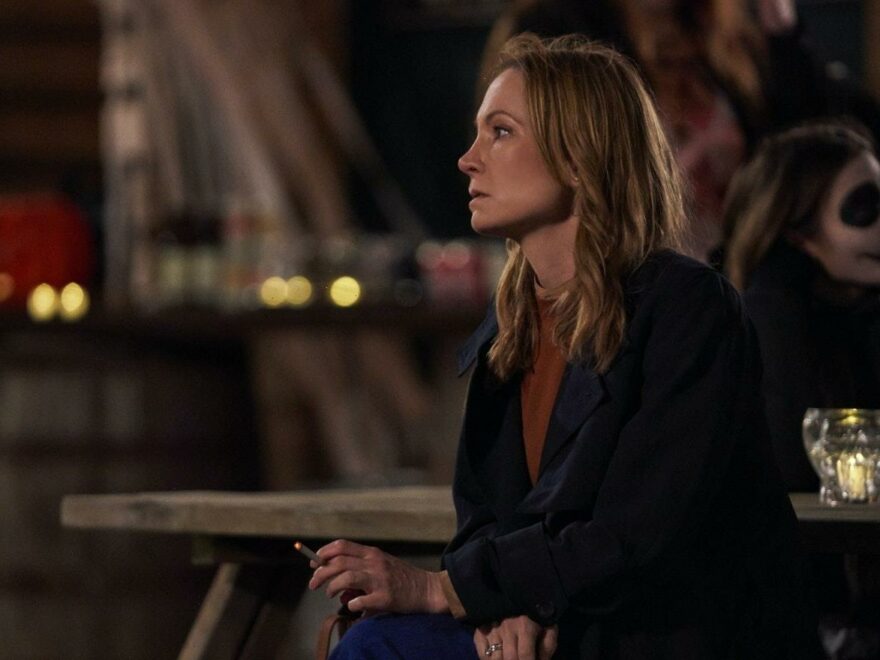 The first episode of ITV’s new thriller has prompted plenty of conversation on social media.

Warning: this article contains spoilers for episode one of ITV’s Angela Black. It also contains references to domestic abuse.

The six-part series, which stars Liar’s Joanne Froggatt in the titular role, follows Angela as she navigates the day-to-day reality of her relationship with her deeply abusive husband Olivier (played by Game Of Thrones’ Michiel Huisman).

On the surface, it seems like Angela has everything – a Grand Designs-worthy home, two children and a husband who comes across as charming and amicable in front of the couple’s friends. But behind closed doors, we quickly learn that things are very different – a truth which only becomes more apparent when Angela is approached by a private investigator called Ed.

At first, Ed reveals that he’s been hired to dig up dirt on Angela so Olivier can get a divorce and claim full custody of their children. But later on, Ed informs her that he’s now been asked to kill her.

If one thing’s for sure, the first episode contained plenty of twists. But beyond the intricacies of the plot, viewers have also been praising another important aspect of the show – its portrayal of domestic abuse and coercive control.

“Loved #AngelaBlack tonight,” wrote one viewer. “A little too close for comfort at points but brilliant acting, gripping and I can’t wait for the next episode.”

“First episode of #AngelaBlack was very good,” added another. “Can tell it’s gonna be a difficult watch due to the subject matter, but Joanne Froggatt is an exceptional actress.”

While a third responded: “As a DV survivor I found #AngelaBlack hard to watch but spot-on, I kept wondering what Olivier’s next move was going to be.”

Other viewers were keen to highlight that, while Angela Black may be a fictional drama, Angela’s experience is a reality many women face on a daily basis – and that her decision whether or not to leave her husband isn’t as easy as it may seem on the surface.

“Every single person saying she needs to go to the police, you know that’s not how it works yeah?” read one tweet. “Coercive control, emotional abuse over years and children in the mix. No one just chooses to stay. Choice is not an option that you can see, that’s the point.”

Another added: “This is everyday life for some people – please don’t ever say, ‘Why don’t you just leave, you deserve better’ or, ‘Why did you stay so long’ – it’s a very long and difficult road to travel.”

Although it’s upsetting to see such a realistic scenario played out onscreen, it’s no surprise that the series has struck a chord with so many people.

Indeed, as Teresa Parker, head of media and communications at Women’s Aid, previously told Stylist, the production team worked closely with the charity to ensure they portrayed the abuse as accurately as possible.

“I worked closely with the researchers and the production team on Angela Black to ensure that the script echoed real-life examples of abuse as much as possible,” Parker explained. “I used examples from cases I knew of to inform the development of the perpetrator and how he would act and rationalise his behaviour.”

With five more episodes of Angela Black still left to air, it seems likely that the show is going to spark some incredibly important conversations.

Indeed, ITV’s latest thriller may be an uncomfortable watch, but it’s shining a light on an experience that often goes unnoticed – and that’s what makes its existence all the more valuable.