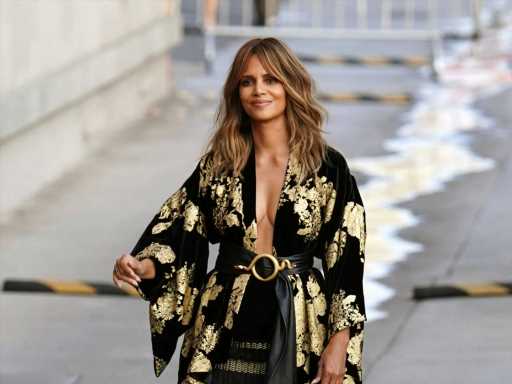 Halle Berry is marinating in her success in front of and behind the camera right now with her new movie, Bruised. She decided to celebrate with a glass of champagne and a sexy dance groove to one of the singles, “Automatic Woman” by H.E.R. from the film’s soundtrack.

Dressed in an all-black outfit with hip-hugging pants and a sheer, fitted corset, Berry was feeling the moment. “When you find out the night before that your film is #1 in the U.S. and #2 globally and you start dranking to celebrate… this is bound to happen,” she cheekily captioned her video. This is a big win for a Black woman in Hollywood to not only helm a film, but to confirm to studios that there needs to be more diversity on and off-screen.

“I definitely feel like there’s a turning point,” Berry explained to Variety about the shift in the entertainment industry. “I’m more encouraged that as women, we are feeling confident enough to tell our stories. And there is a place for us to tell our stories. For so long, our experiences have been told narratively through the guise of men.” And it’s hard (and not hard at the same time) to believe that an Oscar winner has had to fight her way through a system that has kept the doors closed to all but a select few.

“It’s one of my biggest heartbreaks,” she said of her Oscar win. “The morning after, I thought, ‘Wow, I was chosen to open a door.’” Yet those roles didn’t come her way, even though she had a golden statuette on her mantel. Berry added, “Just because I won an award doesn’t mean that, magically, the next day, there was a place for me. I was just continuing to forge a way out of no way.” So the success of Bruised and the likelihood of a busy award show season for Berry is one she is relishing in, because she deserves to have that moment in the spotlight.

Before you go, click here to see actresses over 50 who are more successful now than ever.