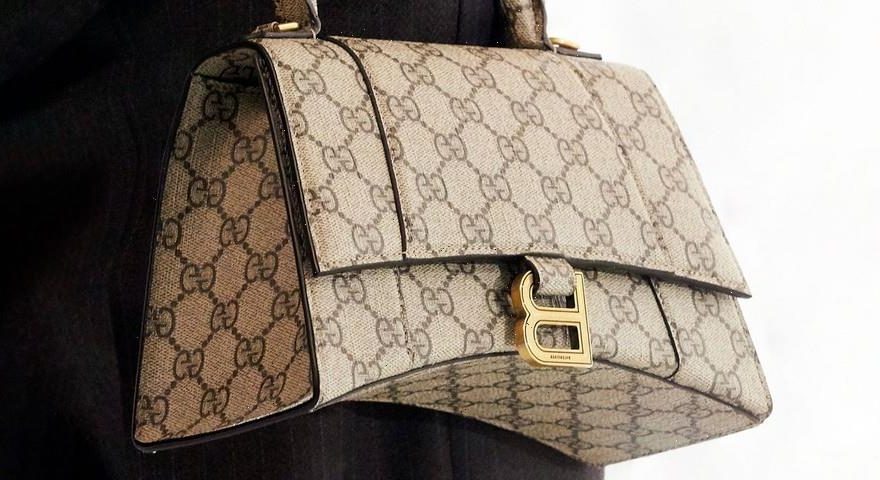 What a way to turn 100. Gucci‘s attention-stealing “Aria” runway show and Balenciaga “hacking lab” are all that’s likely to be mentioned in fashion-focused circles for the imminent future. As seen in the presentation’s accompanying detail shots — lensed by a half-dozen photographers or so as if the runway was a glorified red carpet event — the Balenciagucci (Gucciaga?) items are both a fitting homage to the house founded by Cristobal and a nod to the indulgent logo play that has made Gucci one of the world’s hottest brands.

As reiterated by Gucci’s representatives, the joint effort is not a “collaboration,” but a “hacking lab” wherein creative director Alessandro Michele lifted elements from Balenciaga’s history with permission from the latter imprint’s Demna Gvasalia, uniting key elements of each Kering mainstay. Throughout the presentation, Gvasalia’s exaggerated outerwear, padded and puffy, was rendered in Gucci Green with all-over monograms and branding, occasionally dotted with floral patterns or leather trim. The graphic appeal intimated by the oversized outerwear also graced some sporty jackets, skirts and leggings to create complete logo camouflage.

Elsewhere, some models toted tiny gem-encrusted hearts, while other held co-branded bags. The luxury labels took turns remixing each others signature bags, in fact, as evidenced by a Balenciaga Hourglass bag emblazoned with Gucci’s monogram canvas and one of Gucci’s Jackie 1961 was enlivened by a bit of striped Balenciaga branding. There’s plenty of other Gucci bags and accessories on hand for this collection — including a lush leather riding crop — but the co-branded items are clearly the star of the show.