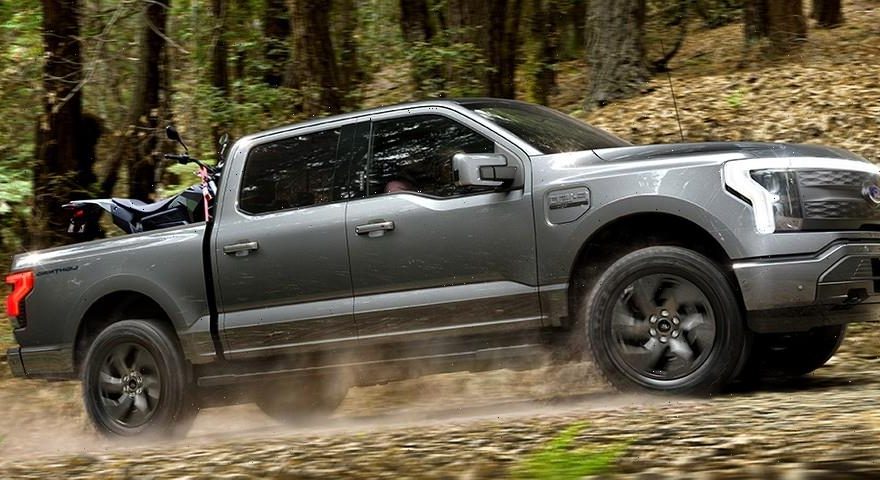 “The truck of the future is here,” says Ford as it unveils the all-new and all-electric Ford F-150 Lightning. It’s a controversial move, as truckers and fans of good ol’ American pick-ups are most used to thumping V8s — something that’s been part of a truck’s infrastructure for decades.

But now, as we continue to move towards an electric future, Ford has charged ahead and introduced an F-150 that features an electric motor that produces 563 HP and 775 lb-ft. of torque, which is the most of any factory-produced F-150 ever built. It delivers the torque almost instantly, working alongside an advanced all-wheel-drive system to deliver a 0-60 MPH time in the mid-four-second region, all while delivering up to 300 miles of range in the top-spec.

It’ll come with a number of packages that can increase the standard payload from 2,000lbs to 10,000lbs if it’s specced in the XLT or Lariat finishes with the extended-range battery and Max Trailer Tow Package, while design elements such as a lower-than-expected center of gravity make it handle well even with a lot of weight on its back end.

In case you need more space, there’s now a lockable frunk (as the batteries are placed in the floor in exchange for a front engine). Amenities and functionality is at the forefront of the new F-150, which is the most technical and tech-infused truck ever built by Ford. Not only does it feature a redesigned interior, packed with tech such as a 12” instrument cluster, a customizable interface for the 15.5” touch screen infotainment system, voice control, cloud-connected navigation and wireless access to things such as Apple CarPlay, Android Auto, integrated Amazon Alexa and SYNC AppLink apps, but the F-150 also features one core party trick.

Ford says that the all-electric truck can power your house in case of emergencies. Utilizing Ford Intelligent Backup Power, the truck will pair the 80-amp Ford Charge Station Pro and home management system together to power your home for up to three days with the extended-range battery, or up to 10 days if power is rationed.

For big cars on the other side of the automotive spectrum, check out the Brabus Mercedes-AMG GLS and GLE 63 S 4MATIC+.
Source: Read Full Article