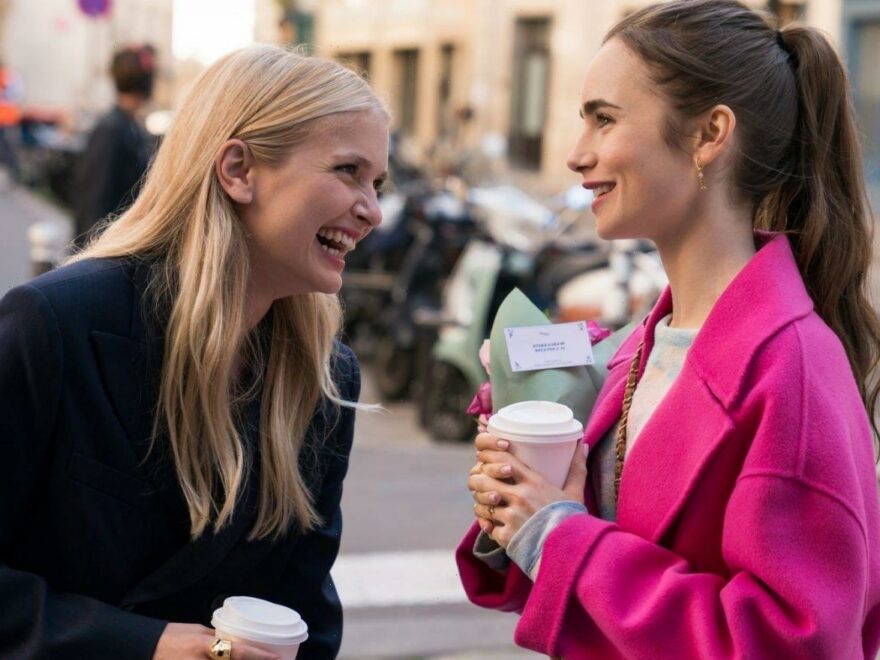 Season two of Emily In Paris sees the introduction of two non-white characters – and while we can commend their casting efforts, the representation of Paris still lacks any real cultural diversity.

Tuning into the second season of Emily In Paris, I was excited to get a much-needed dose of TV escapism. At a time where my Christmas spirit was feeling a little low and concerns around the Omicron variant are at an all-time high, I felt a deep desire to immerse myself in a TV show full of fluff, frills and frivolous dialogue – and Emily In Paris is known to provide just that.

The Netflix show, which centres around American marketing executive Emily Cooper (Lily Collins) who moves to Paris and navigates her way around her job and relationships in the city of love, has gained a massive following and commercial success – but not without criticism.

The first season was called out for its lack of diverse characters and adhering to many French stereotypes (croissants and berets anyone) and this was something Collins said would be rectified in season two.

In an interview with Elle UK, for its December issue, Collins said: “For me as Emily, but also as a producer on [the show], after season one, hearing people’s thoughts, concerns, questions, likes, dislikes, just feelings about it, there were certain things that spoke to the time that we’re living in and what is right, and moral and correct and should be done.

“And I really wanted diversity and inclusion in front of and behind the camera to be something that we really put our focus on, in a lot of ways.”

While I applaud Collins for taking on the criticism and highlighting a need to have people from different backgrounds in front of and behind the camera, season two of Emily In Paris failed in the area they were keen to improve on – and I can’t say I’m surprised.

Season two saw Emily deal with the aftermath of sleeping with her new friend Camille’s (Camille Razat) boyfriend Gabriel (Lucas Bravo). But we were also introduced to two new non-white characters: Emily’s new love interest Alfie (Lucien Laviscount), the cold aloof Brit banker who lives alone with seemingly no life of his own outside of his flat and French classes, and Grégory Duprée, the eccentric designer and former protege to beloved designer Pierre Cadault.

The addition of new POC characters is great – but it comes across as though they are merely placed in the show to tick a box as opposed to actually making Emily’s Paris reflect the real Paris, which is rich with different cultures and racial diversity.

Emily In Paris: Lucien Laviscount as Alfie and Lily Collins as Emily Cooper in the second season

At a time where we are so used to the dated and stereotypical portrayal of Paris through the white gaze,  it would’ve been refreshing to see beyond that in season two and see the city portrayed beautifully on screen for the rich diversity it has to offer.

It would’ve also been pretty groundbreaking to see an American show embrace an authentic take on Paris that still retained the element of magic people believe the city holds, but peeling back the layers to see what the city – as well as the people who inhabit it – truly looks like.

So often television shows feel increasing diversity means casting a non-white love interest or including a scene where we see some form of diversity tackled (as seen at Grégory’s fashion show in the final episode) – but truly, it’s seeing diversity throughout the city and weaving that in naturally.

A lot of the criticism surrounding season one of Emily In Paris was based around the fact that Paris is literally one of the most diverse cities in Europe, largely due to French colonialism, resulting in a large population of Black people from African countries such as Congo and Senegal to Caribbean islands like Guadeloupe and Martinique and more.

If you walk around Paris, it’s not hard to find a non-white person in the city – and while Emily In Paris’ attempts at diversity included two new characters, they were isolated and only served a purpose within Emily’s own arc.

We never saw Alfie beyond the occasional French class and pub, nor did we see much of Grégory (although he was a treat to watch).

Beyond that, we barely saw people of colour in Emily’s world as she travelled from one French arrondissement to another, and went to lavish dinner parties and lunches – and we never saw any French characters from ethnic backgrounds either.

Now, I’m sure some naysayers will ask me why I care so much about the race of the characters if I watch the show for escapism – but escapism doesn’t mean to not be seen at all and in a city as diverse as Paris; it seems silly to not be inspired to take this into consideration and speaks volumes about the class and racial divide within the city and how it’s portrayed in the media.

And when shows like And Just Like That are rewriting their diversity wrongs, it seems so dated when Emily In Paris fails to get this one thing right.

While my expectations for season three aren’t particularly high, I do enjoy the easiness that comes with watching Emily In Paris and I hope for that to continue. But a modern take on what Paris looks like today certainly wouldn’t hurt.