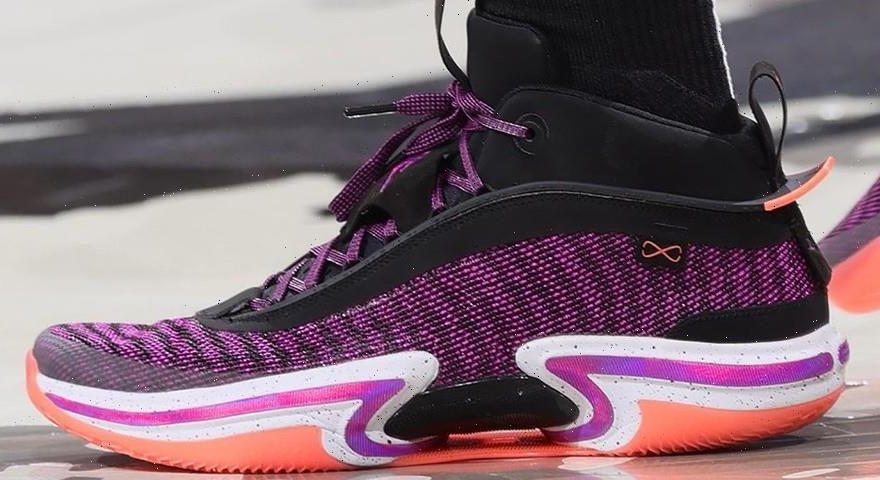 Every year, Jordan Brand always expands upon its performance basketball lineage with a brand new silhouette, and now that the Air Jordan 35 has entered into the latter half of its lifecycle, the sportswear label is now preparing to unveil its newest model. The Air Jordan 36 is expected to release later this year, and prior to officially announcing the shoe, the Jumpman family allowed Celtics‘ All-Star Jayson Tatum to debut the kicks in-game for Game 2 of the NBA Playoffs against the Brooklyn Nets.

The overall shape and height are too dissimilar from the aforementioned AJ 35, but it does sport drastic constructional differences. The arching mid-foot cables and oversized Eclipse piece are tossed out, and substituted for a much more seamless mesh upper and segmented mudguard that is separated by a smaller sized mid-foot plate. Instead of Jordan branding, the lateral wall’s tabs opt for an infinity-like logo, and the heels feature a heel pull tab and tiny lipped out spoiler. Palette-wise, this first rendition that has been spotted color-blocks its upper between purple and black mesh panels and shoe laces, while the collars and tongues are given stealthy finishes. Midsoles are ornamented with black speckles and come accented with tie dye purple and pink trimming. Rounding out its design is a neon orange outsole.

It’s likely that Jordan Brand will announce official release details in the coming months, and we’ll be sure to keep you posted when this info surfaces.

In case you missed it, further images of the heat reactive Air Jordan 1 Mid have emerged.
Source: Read Full Article