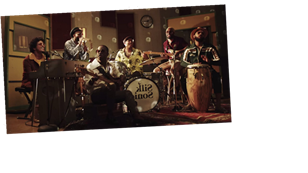 When Bruno Mars and Anderson .Paak first announced their new supergroup, Silk Sonic, last month, we knew we were in for a real treat, and we weren’t wrong. On Friday, the band dropped their first single, “Leave the Door Open,” complete with a ’70s-esque music video. “Imma leave the door open / Imma leave the door open, girl,” Mars sings in the chorus. “Imma leave the door open, hoping / That you feel the way I feel / And you want me like I want you tonight, baby / Tell me that you’re coming through.” One YouTube user described the smooth R&B song perfectly, comparing it to “a warm homemade glazed cinnamon bun on a winter Sunday morning.”

Of course, “Leave the Door Open” is just a taste of what’s to come. The band will later release a full-length album titled An Evening With Silk Sonic in collaboration with “special guest host Bootsy Collins.” While discussing the project with Apple Music’s Zane Lowe on New Music Daily, Mars said .Paak was always “lighting a fire” and coming up with new ideas for their music. He added, “Anderson coming into the studio and unlocking something in my brain that I’ve never used before. That’s what you hope. That’s how inspiration happens, you know? Even just hearing him talk, being a song writer, sometimes you hear things in your voice, but working with other artists and you hear the way they talk. All of a sudden you start thinking differently.” Watch Silk Sonic’s debut music video above.