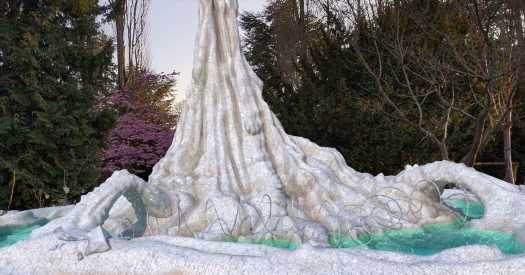 An exhibition of augmented reality artwork by 13 artists, including Ai Weiwei and Isaac Julien, will open simultaneously at 12 gardens in six countries in September, the Jerusalem Botanical Gardens and Outset Contemporary Art Fund, an international nonprofit, announced Wednesday.

“Coming out of the pandemic when outdoor experiences and nature have taken on a new meaning and gravity in our lives, this exhibition represents a fresh way for people to engage with art and nature simultaneously,” the curator Tal Michael Haring, who worked on the show with Hadas Maor, said in a statement.

El Anatsui, Pamela Rosenkranz, Timur Si-Qin, Sigalit Landau and Sarah Meyohas are among the other artists who will contribute to the coming show at locations in the United States, Britain, South Africa, Australia, Israel and Canada.

Visitors can view the art on their smartphone or tablet through a downloadable app; and it will appear on their screens as an overlay on the gardens’ flora. The pieces have been created and organized to enhance and complement their surroundings. “To be able to have an artwork react to your presence and allow you to explore it and invite you to be participatory inside of it is something that is also part of the choice of medium for us,” Haring said in an interview.

It was an earlier sculpture show curated by Maor, “Returning to Nature,” which ran at the Jerusalem Botanical Garden last year, that gave rise to the idea for “Seeing the Invisible.” The organizers felt inspired by its success to continue exploring new ways of presenting work outdoors and mediating between the art on display and its environment.

The new project, Maor said, focuses on a timely, increasingly complicated relationship. “It’s created on this tension between the physical and the digital, what we would then perhaps term the phygital.”

A full list of participating institutions is at seeingtheinvisible.art.com.