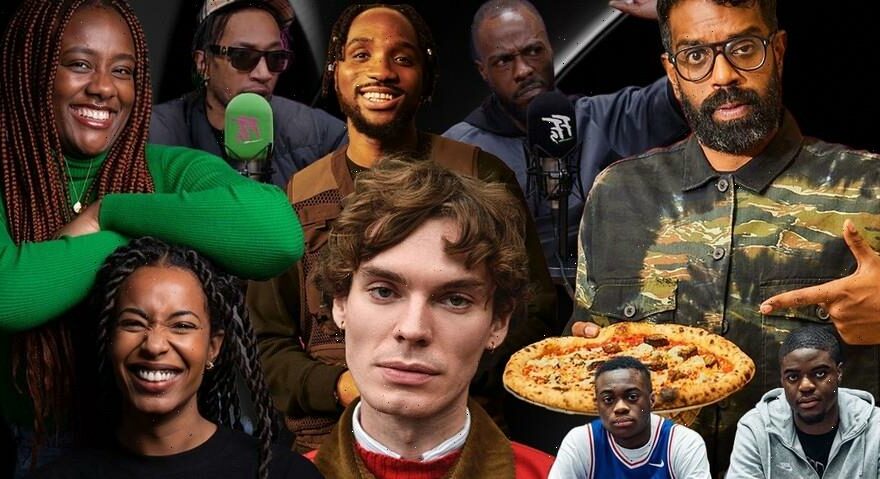 As we move into 2023, it’s almost impossible to keep up with the plethora of good podcasts that exist these days. From established big-hitters to independent start-ups that are turning a new year’s resolution into a reality; it’s no lie that the market is more saturated than ever.

While the US has many more established English-speaking pods that are now certified franchises in their own right, the UK has an exciting array of talent emerging every day, as various names break through with new niches, ideas, and enthusiasm for their craft.

From fashion, sport, and footwear to music interests, conspiracy theories, and interviews with personalities unlike anywhere else in the world, long-form audio content in the UK is stronger than ever, particularly in comparison to television and print publications.

Podcast execution is improving too. Thankfully, the days of hastily thrown-together sets and poor audio quality are largely over. And for those pioneering in their specific genre of podcast, it’s bringing new opportunities within the mainstream and putting faces to the voices that are making listeners laugh, cry, think, and reason every day.

With this in mind, here are 10 UK podcasts that you need in your life throughout 2023 and beyond.

The Filthy Fellas have become one of the most favored influencer collectives in the UK since the podcast launched in 2014.

As a whole, the show is a union of football fans who strive to redefine the way the beautiful game is discussed. Generally, the group tends to stay the same, with the Filthy host, Tego, joined by the likes of Poet, Jordy, Specs Gonzales, PK Humble, Margs, and Miles.

However, from time to time, the Filthy collective welcomes new faces to the panel, whether that be fellow influencers, musicians, or footballing legends – such as former Manchester United defender Rio Ferdinand and Liverpool legend, John Arne Riise.

Filthy Fellas is now a movement encompassing those same voices who have gone on to take the sports and British media world by storm with live events, meet-and-greets, merchandise, and much more coming with their weekly talk shows.

Hosted by the two Seasoned Sessions producers, Hanifah and Ada, the SS podcast is a weekly chat about news and trending topics from a Black perspective.

From music and entertainment to politics and social media trends, Ada and Hanifah’s conversations take a deep dive into topics that are sometimes overlooked in the mainstream media.

Seasoned Sessions celebrates Blackness in spaces where it’s often uncredited, and thus, the duo has dedicated its channel to creating and sharing content that resonates with the Black British experience.

Since HC Pod’s first episode in 2014, the show’s hosts Chuckie, Poet, and often Savage Dan have consistently brought insightful, sensitive, and often hilarious conversations and discussions to the table.

HC Pod also brings a completely different side to the Poet we hear on Filthy Fellas, with his emotive commentary often blended with his deep life experiences and times of growing up on the fringes of London’s society.

Topics usually revolve around music – with Chuckie’s career starting as a DJ – but can stretch to past and present sex stories and scandalous activity in the UK and beyond. Conversations can also get very candid, exploring knife crime and struggles with racial discrimination, while Chuckie’s open-minded approach to the show often welcomes interesting guests to explore the topics we never knew we needed to know about.

Yorkshire-born Danny Lomas has never been a stranger to putting himself in the public eye (or ear). Following his time on YouTube, where he explored fashion in one of the most unique ways on the platform, the influencer and fashion critic has now brought his conversations to a podcast format.

Throughout his consistently-released episodes, Lomas’ warm personality and aura shine through regularly, where we hear him discuss his current fashion interests and passions.

Furthermore, Lomas also welcomes fresh guests on his show each week. Most recently, the podcast welcomed Alicia Robinson of AGR, where she joined the pod to talk about her journey from running the door at one of East London’s coolest clubs, to running her own LVMH-nominated brand.

Hosted by Tazer Black, Mavin Abbey, and Keith Dube, 3 Shots of Tequila is a supercharged conversation on what is going on in the world for three young men living in London. The informative chats dig deep into Black London culture, racist Britain, colourism, financial issues, and comical scenarios that most young men come across during adolescence.

The 3 Shots of Tequila podcast continues to go from strength to strength, having sold out a live show in London, before signing an exclusive deal with Spotify UK to become one of the country’s leading talk shows. The group continues to grow in popularity after each episode, inspiring young men and women to share personal stories that the resonate with their fast-growing audience.

Based out of Manchester, the M1 Podcast is one of the most exciting and up-and-coming podcasts in the UK right now. Hosted by Mordz, SK, and rising internet personality, Billy The Goat, the trio often invites guests to their weekly show, which is based in the rainy city’s NQ House.

Whether the guys are welcoming rising rappers out of their city to sit down and chat, or more well-known media personalities from outside of the 0161 – such as Poet, Lippy Lickshot, and Loons – you will never catch a dull conversation without laughs, intrigue, and past personal stories.

Furthermore, the M1 Podcast and its guest of the day also end each episode with off-the-cuff rap freestyles based on anything from confectionary to sweet ones. So, if M1 isn’t on your radar yet, it must be for 2023.

For those who don’t think a 90-minute game of football is enough, Stoppage Time TV is one of the best in the business when analysing the week’s games across the Premier League and the rest of Europe. Hold tight the three point collectors.

The show is hosted by Mayowa Quadri, Fuad Cadini, and CultureCams – three diehard football experts and acclaimed content creators – with the trio changing the way football is viewed through the eyes of traditional punditry.

Instead, the group approaches the game through an educated yet culturally-relevant lens and takes the conversations your friends are having in living rooms and pubs to all of your favorite streaming platforms.

As one of the most popular podcasts on the list, Romesh Ranganathan’s Hip-Hop Saved My Life delves into the host’s relationship with the genre while digging deeper into how it continues to inspire him every day.

The perspective of the genre comes from one of a fan, rather than someone who claims they’re an expert. It’s a relatable account of the music we all know and love and each week, Ranganathan welcomes a new guest on the show to talk about their own relationship with hip-hop.

With appearances so far coming from new-school UK rap stars like Big Zuu and Barney Artist to legends of the game such as Dotty and Blade, Hip-Hop Saved my life will keep you covered on all things rap for the remainder of the year and beyond.

For those who want intellectual conversations about current affairs, the Bunker Podcast is the one for you. The talk show unlocks news and politics from a different angle and unpacks discussions from all corners of the world.

Big issues are examined through a eloquent mix of humor and expertise, while the topics also cut through the noise of mainstream media and explain what is really going on.

Every day, through the opinions of various hosts, explainers are released that stretch across in-depth interviews, offering a fresh perspective on under-reported stories to save you from the dribs and drabs of everyday news coverage.

The Wired Podcast is for those interested in all things tech. Hosted by James Temperton and the rest of the team, the weekly episodes cover the bases of all things tech, science, business, and culture news.

Conversations can come in the form of debates, as well as through games and quizzes as the team reminisces on history’s best breakthrough tech finds and also what is to come in the future.

Additionally, stand-out episodes have come in the form of finding out what happens when AI companies steal your face, as well as the exploration of the most vulnerable places on the internet. So, if you want to learn more about what goes on inside the devices we use daily, then The Wired is the one for you.
Source: Read Full Article