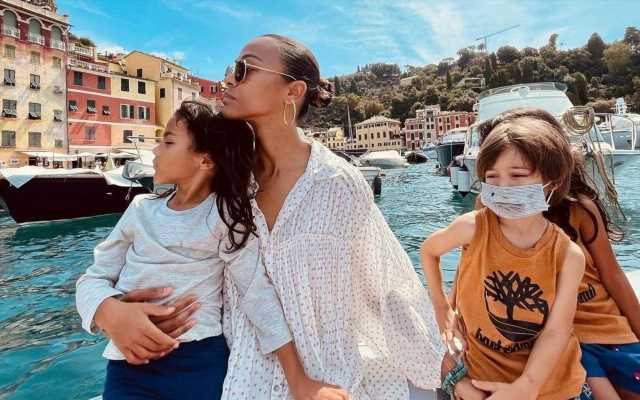 The ‘Guardians of the Galaxy’ actress claims her three young children with husband Marco have kept her out of trouble and helped her to adopt a healthier lifestyle.

AceShowbiz –Zoe Saldana‘s children keep her “out of trouble”. A mother to seven-year-old twins Bowie and Cy, and Zen, five, whom she shares with her husband Marco, the 44-year-old actress believes they’re one of the keys to her youthful appearance.

“I think having children keeps me out of trouble a lot. I go to bed early. I eat better. I sleep longer sometimes. I’m back to sleeping,” she shared.

The Hollywood star has changed her lifestyle since becoming a mom. Zoe is now much more self-disciplined than she’s ever been – and she thinks it’s paying dividends.

The actress – who married Marco in 2013 – told PEOPLE, “I was having a lot of problems with my sleep. Whereas right before I had them, I was very much of the policy of work hard, play hard. And I loved my life like that. But I feel like having children happened at the right time for me because in your mid-thirties to late thirties, early forties, that’s when you go to bed thinking that you’re one thing, and you wake up feeling like something else.”

Meanwhile, Zoe previously discussed the challenge of raising three young boys. The actress thinks she “would have been great as a mother of daughters” – but she’s “accepting the challenge” of raising her sons.

Speaking in 2020, Zoe joked, “The third one was supposed to be [a daughter] and then my husband just doesn’t give any girls. I would have been great as a mother of daughters, but the universe, in its irony, and how I became a mom of three boys in the post-#MeToo movement [means] I’m accepting the challenge.”

Zoe has relished the chance to “nurture” her sons. She said, “I get to witness and really nurture a young boy before he turns into a man, and I think that that’s the task for us mothers, as well.”