Zac Efron joined Jessica Alba for a fun TikTok dance routine, and if there’s one takeaway from the video, it’s that Zac has still got it!

Zac Efron‘s time as basketball player-turned-musical star Troy Bolton on High School Musical may have ended long ago, but the heartthrob actor hasn’t lost his touch when it comes to his dance moves. Zac, 33, recently whipped out some incredible dance skills in a TikTok video, which can be seen below, alongside Jessica Alba, 40, and the dual routine has fans clamoring over Zac more than they ever have — which is saying something!

That time in #Dubai I got #zacefron to do a #tiktok dance ????w me… while shooting movie trailers 4 #dubaitourism ☺️

Zac and Jessica busted out their moves while they were taking a break from filming movie commercials together for Dubai Travel. The video, which was shared on Jessica’s TikTok account on Aug. 17, featured the two stars performing the “Don’t Rush Remix” challenge while dressed in very fancy clothing. Zac was looking as handsome as ever in a light jacket, white dress pants and beige shoes, while Jessica looked stunning in a white top, dark pants and shoes.

The video began with Zac and Jessica standing side-by-side, before they commenced their routine by each kicking their feet around. After they each did a fun spin-around (while Jessica kept her hands in her pockets!), the two actors did a light shimmy to conclude the dance. Jessica captioned her video — which has garnered over 1.3 million likes — “That time in #Dubai I got #zacefron to do a #tiktok dance 💃🏽🕺🏻w me… while shooting movie trailers 4 #dubaitourism ☺️.” 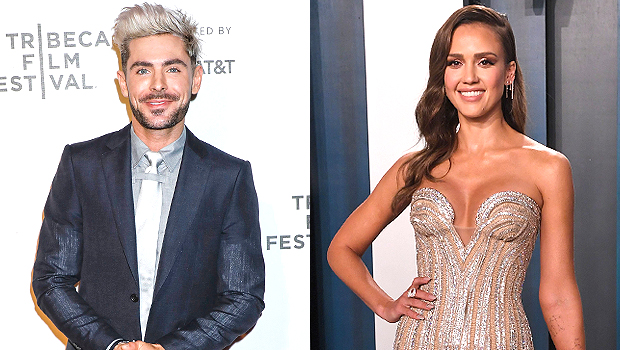 Jessica and Zac recently worked together on the “Romance to Remember” rom-com trailer from Dubai Travel. The trailer features the actors journeying throughout Dubai on very separate itineraries designed by a star-crossed couple who are destined to cross paths, according to reports.