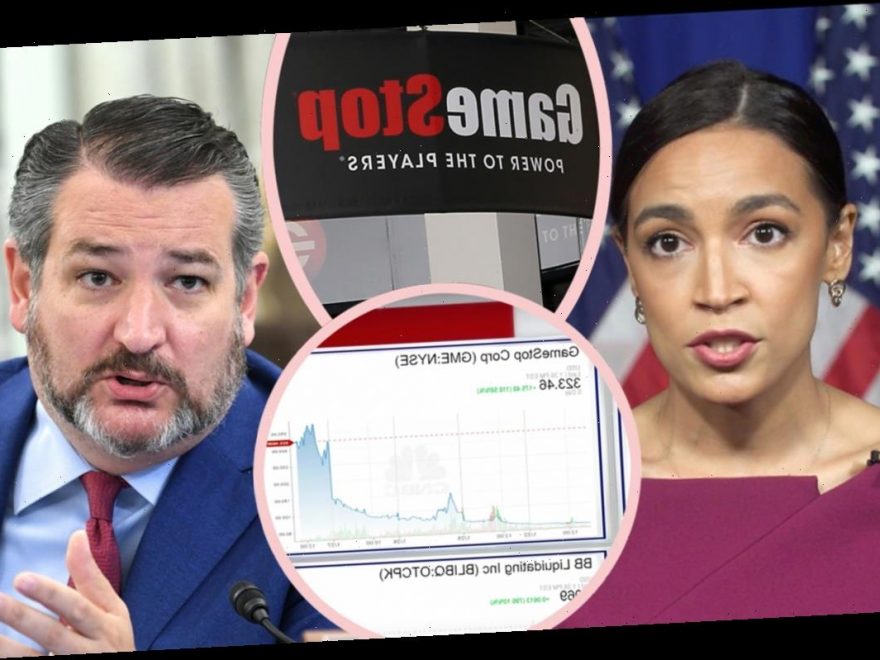 If you’ve been on the Internet at all the past 24 hours, you probably haven’t been able to avoid the buzz about GameStop stock. But… you know… what the serious eff is going on?!

Reddit users bankrupting a huge hedge fund by buying stock in a failing video game store? How and why and huh??

We’ve seen this reported as “nihilism” and “nostalgia” as the media struggled to keep up with what was happening. Margot Robbie even trended on Twitter as people said they wished they had the Big Short star to explain this to them in a bathtub.

Well, we’ll do our best…

OK, in stocks a short is a bet AGAINST a company. The basic idea in stocks is to buy low and then sell high, right? You pick a company you think is going to do really well in the future, and you bet your money by buying stock in them. This is the same principle but going in reverse.

In these kinds of shorts, big hedge funds sell when the price is normal and then buy when it’s low.

How do they do that? Hedge funds look for businesses that are having problems. Take GameStop, for instance. Video games are going more and more digital — and people can buy them online from Amazon or Walmart for cheaper anyway. So the retailer isn’t doing so hot. You may have noticed some locations near you closing down recently?

OK, so hedge funds borrow a ton of stocks of that company for a set price and within a certain amount of time have to pay it back. With quite a lot of interest we imagine.

But they take those shares they don’t even own and SELL THE HECK OUT OF THEM. Just sell ’em all at the normal price of the company. Let’s say $10 apiece. They’re hoping that the company fails completely within that timeframe — before they have to give the shares back. When it does, they can buy back the shares for crazy low prices. Let’s say $1. Then they can give back the stock, pay the interest, and walk away having made $9 profit off each share.

OK, so what happened in this case is a hedge fund called Melvin Capital short-sold GameStop stock and have been waiting for it to tank to buy it back. But it didn’t go unnoticed. Everyone saw what they were doing. In fact, that’s part of the plan for short-selling.

See, part of the problem with short-selling is that everyone can see when these hedge funds are betting against a company, and that leads investors to believe the company is going to tank. Before it does, they sell off whatever shares they have. The more people sell, the lower the price goes.

(Just think about if you’re trying to sell something on eBay FAST. You have to sell it for lower than all the other listings to make it a good deal. Then imagine EVERYONE is trying to do that all at once.)

So unlike regular stock trading, when you’re betting on a company succeeding… here they’re betting big on companies failing, which in turn can make them fail. And it works. Hedge funds crush businesses all the time and make a lot of money doing it.

So what happens if the company doesn’t fail? Well, the hedge fund would lose millions. Millions they might not even have! Remember, they still have to give those shares back to the broker they borrowed them from.

POWER TO THE PLAYERS

On a subreddit called WallStreetBets, a bunch of independent stock traders — you know, average joes just buying stocks on phone apps — decided to buy GameStop stock. To buy a LOT of it. They don’t have the money that a giant hedge fund does, but there are thousands of them. Each person buying stock instead of selling caused the opposite of the eBay effect. The price went up. WAY up.

Melvin Capital lost a ton of money as they closed their short position. Another fund called Citron Research that was trying the same thing jumped ship, too — though they claim to have lost far less. In all, GameStop short sellers are estimated to have lost as much as $5 BILLION.

Like we said, tons of media outlets were shocked by the move. Most seemed to take the side of Wall Street, hedge funds, and the status quo. The Reddit investors have been accused of everything from unlawful coordination to manipulate prices to taking part in a so-called “pump-and-dump” scheme, artificially raising stock prices in order to quickly sell.

While it’s true some of the folks who bought low could sell and make some serious money, the Reddit investors can’t possibly all profit here. Once they all start to sell, the price tanks again and some of these folks lose their shirts as the bubble bursts, right? This isn’t over, and that would indeed be a tragic end to this story.

Well, what if it wasn’t all about making money?

At least one investor made it clear exactly what was at stake here. In an open letter, a user going by the handle ssauronn reminded everyone about how short-selling firms made billions of dollars off of the 2008 housing crisis while so many normal folks lost their life savings. You know, the thing Margot Robbie was actually talking about in The Big Short.

(Funnily enough, CNBC, who have come out swinging with hot takes against the investors, still has a headline available from 2008 reading, “How Short-Sellers Almost Destroyed U.S. Banking.” Huh.)

That user told Melvin and everyone else this is “personal,” writing:

“To Melvin Capital: you stand for everything that I hated during that time. You’re a firm who makes money off of exploiting a company and manipulating markets and media to your advantage. Your continued existence is a sharp reminder that the ones in charge of so much hardship during the ’08 crisis were not punished…

This is personal for me, and millions of others. You can drop the price of GME after hours $120, I’m not going anywhere. You can pay for thousands of Reddit bots, I’m holding. You can get every mainstream media outlet to demonize us, I don’t care. I’m making this as painful as I can for you.”

No idea how many of the investors agree, but many people rooting for them do. Of course, not everyone is cheering.

We’ve seen a lot of responses asking about whether hurting this hedge fund and their massive short bet wasn’t also hurting a lot of working people’s 401Ks just like the financial crisis did. But 401Ks aren’t short-selling; they’re diversified investments in lots of companies — and they want the prices to go UP, not down.

Speaking of betting on companies going up…

GameStop isn’t the last company being targeted by short-sellers, so the Reddit investors have followed. There have now been surges in the stock prices of Build-A-Bear, Tootsie Roll, and several others — most notably AMC Entertainment. The theater chain has obviously been struggling during the pandemic — but is not, like many see GameStop, part of a dying industry. Once things open back up post-vaccinations, AMC could recover… but not if it’s killed by hedge funds.

Could the investors fighting off the short-sellers actually keep AMC on life support? Well, there’s a problem…

ROBBING FROM THE POOR?

Several investment companies, like Schwab and TD Ameritrade have tried to stop the Redditors’ investment by simply restricting trading on the stocks they’re buying. One stock-trading app, ironically named Robinhood as it was advertised as a way for the little guy to buy stocks, has straight up BANNED the little guy from buying stocks. They barred their users from buying any more AMC stocks and are only allowing them to sell GameStop. Obviously hedge funds don’t have the barrier of having to buy stocks using apps. They have people on the floor of the actual stock market for that.

It’s a shockingly naked pro-Wall Street move for a company named for the guy who robbed from the rich to give to the poor.

Remember how we said people were rooting for the little investors from Reddit? Well, the internet takes care of its own. Since Robinhood banned folks from AMC and GameStop, they’ve gotten over 100,000 new 1-star reviews, giving them an abysmal 1.1 rating on the app store. Ouch.

LAYING DOWN THE LAW

Obviously getting Yelped isn’t going to be enough in this case.

Robinhood is favoring the big hedge funds so blatantly, it’s got the attention of concerned lawmakers. Representative Alexandria Ocasio-Cortez called the move “unacceptable,” tweeting on Thursday:

“We now need to know more about @RobinhoodApp’s decision to block retail investors from purchasing stock while hedge funds are freely able to trade the stock as they see fit.”

She even went so far as to say she’d “support a hearing if necessary.”

OK, ready for the most shocking part? The far right guys are on board, too! Texas Senator Ted Cruz retweeted AOC, saying, “Fully agree”:

Well, while they may agree on the issue, at least we know the world hasn’t flipped upside down. Because AOC hasn’t forgotten Ted’s role in inciting the insurrectionist mob that stormed the Capitol building on January 6. She clapped back:

“I am happy to work with Republicans on this issue where there’s common ground, but you almost had me murdered 3 weeks ago so you can sit this one out. Happy to work w/ almost any other GOP that aren’t trying to get me killed. In the meantime if you want to help, you can resign.”

So where do y’all fall on this one, Perezcious readers? Rooting for the underdog to take down the big hedge funds? Think these little investors are just running a scam? Still confused by the whole thing??

Remember, we did our best, but we’re as close to experts as we are to looking like Margot Robbie, so we definitely encourage you to learn more on your own.