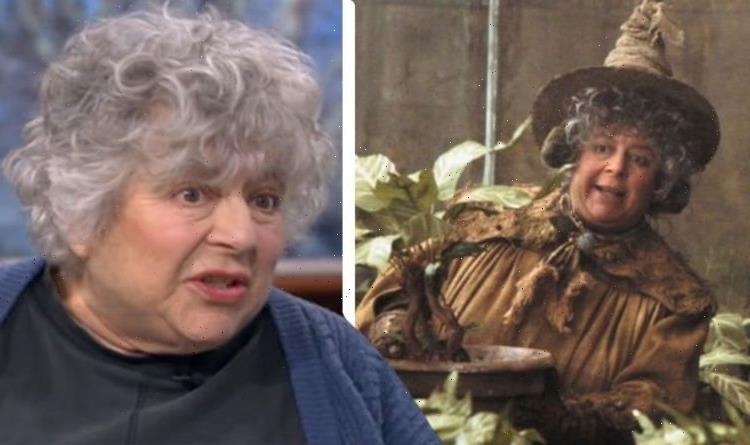 However acclaimed or successful Miriam Margolyes, 80, is, she will always been known for one role, and one role only. In fact, she admitted she will “go to my grave” for being best known as a scatty teacher in an incredibly popular film franchise.

I didn’t think that it was terribly distinguished writing

Looking back at her hugely successful career, the pinnacle was definitely her role as Professor Pomona Sprout in two of the Harry Potter movies.

But despite being grateful that it made a “great difference” to her career, Miriam admitted the script was slightly “banal” when she read it aloud during her audition.

In an expert reported in the Daily Mail from her new book This Much Is True, Miriam wrote: “It made a great difference to my career, making me more famous than I ever thought possible.

“Fans follow me in the street; people ask to have their photographs taken — selfies, as they call them — standing next to Professor Sprout.

“Even now, I have to get photographs printed to sign and send out to my Harry Potter devotees but, if I’m honest, which I must be, I fell asleep during the premieres of both films!

“And whenever I glimpse scenes on television, I’m never absolutely sure what’s happening — even in the ones I’m actually in!”

She giggled: “For that reason, I can honestly say that I’ve never seen a single Harry Potter film and I’ve still never read the books.”

Recalling her introduction to the concept of the film, she admitted she didn’t know anything about it.

“When I was first interviewed for the part, I confessed I didn’t know much about the series,” she remembered.

“But if they wanted someone who could act as a teacher, there was no question that I could play the part.

“They gave me a page of script to read; I didn’t think that it was terribly distinguished writing.”

But she confessed: “In some ways it was rather banal, actually, but I read it and that was that.”

No one could have predicted how successful the franchise would be, which has led to the set up of tourist attraction The Making of Harry Potter at the Warner Brothers Leavesden Studios, allowing fans to get up close and personal through a walkthrough exhibition and studio tour of how the magic was brought to life.

Hogwarts, Miriam explained, was based on Alnwick Castle in Northumberland, where she was put up in hotels with her co-stars Maggie Smith, Richard Harris, Alan Rickman and Kenneth Branagh.

“It was always a little scary to be working with Maggie Smith,” the actress added.

“I am very fond of her, but her reputation is justified; she is a great actress with a distinguished career, she loves to laugh and she’s deliciously witty and jokey.

“But there is that other side to her, which is biting.”

She went on: “Luckily, Maggie and I got on. Sometimes she would say, ‘Oh, come and sit with me, Miriam, I’m bored.’

“I would go and sit with her and we would talk and laugh. She also had a nicer trailer than I did!”