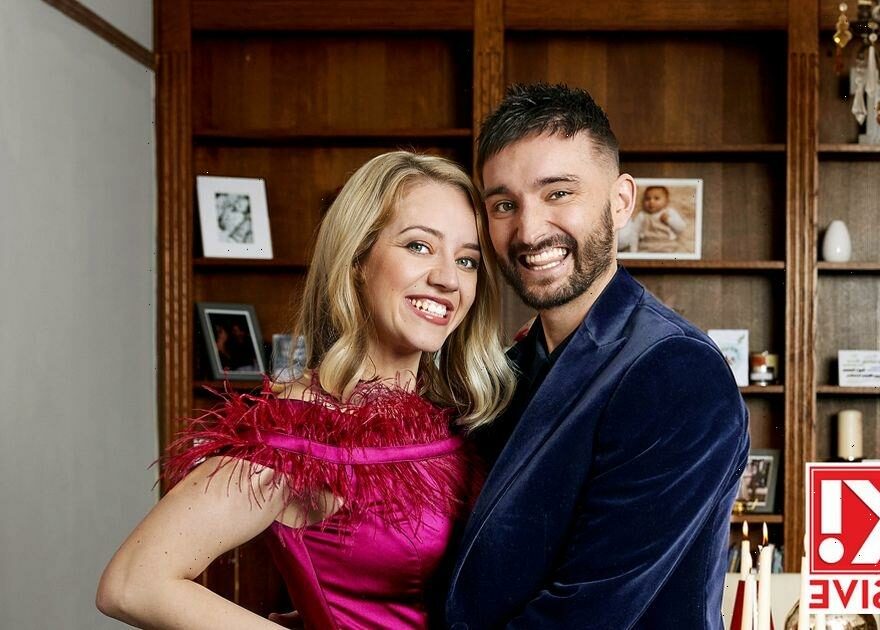 After undergoing treatment for an aggressive brain tumour shortly before last Christmas, Tom Parker didn’t feel much like celebrating. But this year, he’s ready to get stuck into the festive season.

The 33-year-old singer was diagnosed with stage four glioblastoma last year, with doctors telling Tom the devastating news that the cancer was incurable. But after throwing everything they’ve got at the disease, the uber positive couple are “over the moon” that Tom’s tumour is now stable. Here, they reveal their Christmas plans and share their goals for 2022.

Are you an OK! VIP? If not, why not? It’s free and gives you backstage access to stories like this, exclusive home tours, special discounts and so much more! All you need to do is pop your email address below! P.s. if you’re already seeing this article in full, congrats – you’re already on our guest list! As The Wanted star sits down for our festive chat with his wife Kelsey, 31, who he shares two children with – Aurelia, two, and one-year-old Bodhi – he admits that while this news is the greatest Christmas present, it’s also nice just to get some routine back.

“There’s definitely a bit more normality, which will be nice this year as we can enjoy Christmas,” Tom explains. “Even just getting up with the kids in the morning, I can do their breakfast, whereas before I couldn’t. It’s nice to be back involved and feel part of the family unit again.”

Here, for our gorgeous shoot in their new home, Tom and Kelsey update OK! on how they are both doing, their plans for Christmas and whether they’re keen to add to their brood next year…

Hi guys! Are you excited for Christmas?

Tom: Yes, we can’t wait. I’ll get involved helping Kelsey’s mum with the cooking. It’s nice to be back involved and feeling part of the family unit again. With the chemotherapy and radiotherapy, you feel disjointed.

You can’t really get involved as you’re so exhausted. It’s all so thought consuming that you haven’t got time to get involved in Christmas. It’s going to be nice to be a part of it.

Kelsey: We’ll try and make it as special as possible. Now we’ve got kids it is completely different for us. The years have gone where we’d go to our local pub on Christmas Eve!

Kelsey: Last year we slept at my mum’s the night before. Tom was recovering from radiotherapy and chemotherapy, so he just sat there in his dressing gown on Christmas Day. I can’t even remember if he had Christmas dinner.

Tom: I can’t remember Christmas last year, I’ve just put it to the back of my mind. This year will be like a new Christmas.

Tom: We always get up and do presents at Kelsey’s mum’s.

Kelsey: We watch some Christmas TV. We’ll always have a small breakfast and Home Alone will go on and then everyone will come over.

Tom: Then we’ll have a few beers and make a joke out of ourselves!

Kelsey: We have dinner then play a few games. It’s really laid-back.

Were there any points this year where you worried you wouldn’t make it to Christmas, Tom?

Tom: To be honest, no, it’s not crossed my mind. I’ve never really been at the point in my illness where it’s forced us to think about death and not think about life or events going forward.

I do feel fortunate about that situation, but we have put a lot of effort into getting to that point. It is easy to sit back and think, “I’m going to die,” as that’s what they say. When you get given that news they say, “Your chances aren’t great,” but I said, “Watch me, I’ll make them great.”

Kelsey: That’s why we never got a prognosis or anything, because how can they even tell you? Someone we know in the glioblastoma world was given three days and now they are eight months down the line.

Tom: I think you have to be, but I can totally understand why people aren’t. It’s very consuming, mentally and physically. I’ve still not got much motion in my left arm and leg, but as frustrating as it is, I’m having physio and I just get on with it.

We’re so happy to hear the news your tumour is stable, Tom…

Tom: Honestly, there could only have been one better present before Christmas and that would have been for it to have gone. But to be at that position for it to be stable as a disease that moves very fast, I think the doctors were stunned by it.

Kelsey: I was over the moon. But I knew he was going to be OK because he’s not showing any signs or symptoms.

What treatment are you currently having?

Tom: We do a treatment once every three weeks that’s not on the NHS so we have to fund it. That’s pretty much it. To be honest,
I don’t really know what it does, but it seems to be keeping the tumour stable.

Kelsey: It starves the blood in the tumour to stop it growing.

Going forward, what is the plan? Do you carry on with the treatment?

Tom: I think so. I don’t think the doctors really know either – it’s unusual to be 16 months down the road from the diagnosis, so they are a bit perplexed. We don’t know where to go next so we are just cracking on with it.

It’s been a really tough year for you all, how do you deal with down moments?

Kelsey: Even when Tom was at his worst, I had my family coming in to help. Tom hates upsetting my auntie Julie, so if he wasn’t eating we’d send Julie up there with a smoothie and he wouldn’t say no to her!

We all came together and got through it, so I think that’s why we haven’t got down days as there hasn’t been a point where we’ve thought, “This is the end.”

And how are the kids doing?

Tom: They’re doing good. Aurelia’s a bit more in tune with what’s going on for Christmas this year. Last year, she was still a baby really.

Kelsey: We’ve got the elves out and she keeps chatting about them. We’ve said they report back to Santa!

Tom: She plays us like fools, she’s so smart and intuitive for her age.

Is she a Daddy’s girl?

Tom: It depends what mood she’s in. If she wants to kick off, she goes to Kelsey, as I’m more strict.

Tom: I’m happy with that role. She respects it and listens to what I say.

What about Bodhi, how’s he doing?

Kelsey: He’s such a good boy, but he’s into everything. He climbs the stairs on a daily basis.

Tom: It’s mad – boys and girls are so different. Aurelia’s a bit of a scaredy-cat, whereas Bodhi’s straight into everything.

Kelsey: He just laughs and hisses. He wants to speak but he can only hiss at the moment!

What’s on the kids’ Christmas lists?

Kelsey: Aurelia’s asked for a trampoline. Bodhi’s not at the stage where he’ll know what’s actually going on, but Aurelia loves Christmas. Tom keeps sending me Christmas presents for himself!

Tom: The kids get presents all year round!

What about you, Kelsey?

Kelsey: I’ve not even thought about it. Anyway, Tom’s not going to be getting anything on his list as we need stuff for the house. We’ve just moved and we need curtains, lights, so many things…

Your story has touched many people. Have you received lots of support?

Tom: Yes. I think people think its a rare disease, but the amount of people that have come forward to speak about it shows you it’s not. It’s nice to be able to give something back to that community.

Do you feel lucky you have Kelsey by your side through it all, Tom?

Tom: 100%. It would be easy to sit around and do nothing when you’ve not got someone next to you fighting your corner to motivate you. You need it.

How do you feel about the future?

Tom: We live in the moment so it’s hard to plan.

Kelsey: With everything in life at the moment, it’s hard to plan. We don’t plan ahead with things like holidays, we live each day. We’re not very organised.

Do you have any fears going forward?

Kelsey: No one knows what anyone’s life is going to be like… I could get hit by a bus tomorrow.

Tom: That’s the one thing I have taken from this journey, there’s no point thinking about tomorrow. None of us are guaranteed it, so we have to live for now.

Are you looking forward to The Wanted tour next year, Tom?

Tom: I cannot wait, it will be a distraction from me getting treated for cancer. Just having a bit of normality again. The boys have been great. We’re obviously in an unusual situation. They’ve always got their eyes on me, as my walking can get a bit wobbly.

What else have you got coming up?

Tom: The Wanted is taking over my life again. There’s going to be a lot of rehearsals. It feels familiar but also new at the same time. We all naturally have those roles that we fall into.

Kelsey: So much has changed. Tom is married, he has two kids – so he’s gone back into the band as a different person, a responsible adult!

For all the latest news on Tom Parker and his family, sign up to OK!’s daily newsletter.

After you had Bodhi you told us you’d want more children Kelsey. Dare we ask if 2022 might be the year?

Kelsey: Tom keeps saying he’s broody! We don’t know, we can’t say when.
We definitely will have more children.

Kelsey: Yeah. Everything happens for a reason. We’re blessed we’ve got a boy and a girl. The age gap was short.

Tom: So if we didn’t have any more we’d be happy.

Kelsey: But we will have more!