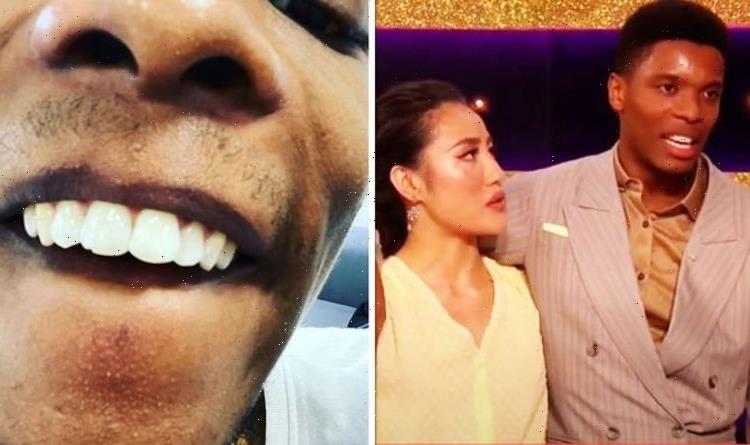 TV presenter Rhys Stephenson has revealed that he has chipped his tooth while training for his Strictly Come Dancing performance on Saturday. The CBBC host, 27, took to Instagram where he joked that the Cha Cha Cha he is currently rehearsing is a “menace”, while posting a snap of his injury.

Chipped my tooth in rehearsals today, this cha cha is a menace

Taking to social media, the star gave his 13,400 followers an insight on how his training with dance pro Nancy Xu is going.

Rhys wrote: “Chipped my tooth in rehearsals today, this cha cha is a menace.

Rhys accompanied the candid caption with a snap of his upper row of teeth, revealing a tiny chip in his top left tooth.

Concerned, @Niamh1901201asked the star: “@rocketrhys are you still taking part?”

However, Rhy’s Strictly partner saw the funny side of things and commented with a row of laughing faces.

Last week saw the children’s TV star blow the judges away with his debut performance on the dance floor.

Performing the Viennese Waltz with Nancy, Rhys scored an incredible 27 out of 40, leaving him in third place on the leaderboard.

When asked on the Strictly spin-off show It Takes Two how they did so well, Nancy gave an insight into their rigorous training routine.

Detailing their “posturiser” training band, Rhys said: “It’s called a posturiser, but it looks like a stocks thing from Victorian times where they throw fruit at you,” said Rhys.

“Nancy had me in this and just twirling around with it.

“I can feel how my body’s supposed to be when doing it,” he added.

However, the star went on to reveal that he wasn’t a fan of his professional’s chosen training technique.

“The band is horrible, the band is a torture device,” Rhys declared.

Nevertheless, the star’s hard work paid off as he and Nancy got the second highest score in the first week.

Three days ago the TV host shared a snap of himself and Nancy training for their Cha Cha Cha performance.

Leaning on the dance pro with a pained look on his face, Rhys captioned the picture: “Cha cha training’s going great guys”.

Strictly Come Dancing continues at 6.45pm on Saturday on BBC One.