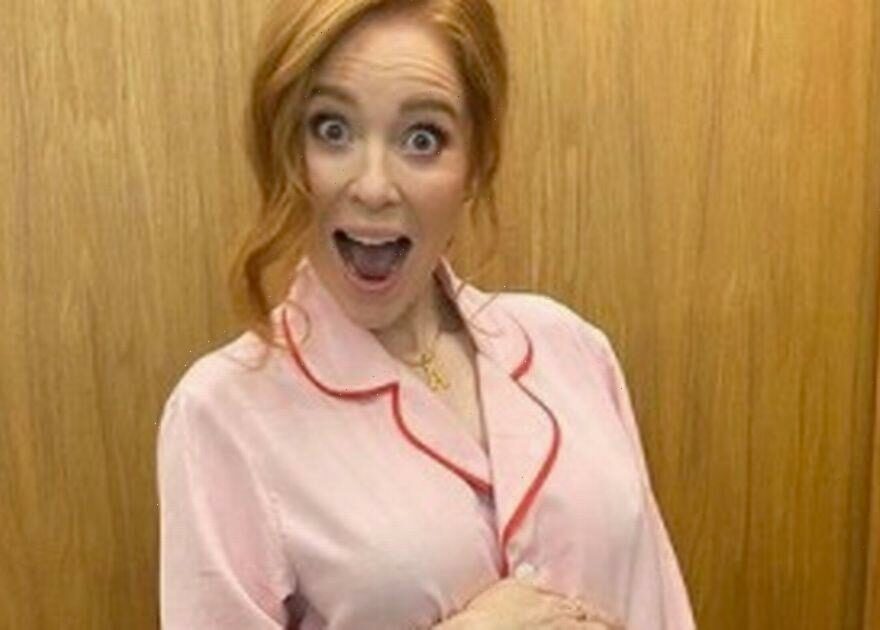 The 37 year old took to her Instagram feed to announce the happy news with her 219,000 followers as she shared two excited photos of herself posing with her blossoming baby bump.

The One Show presenter can be seen dressed in a light pink shirt with red detailing alongside some white jeans and converses as cradles her bump in the photos.

In the caption, she told her legion of fans: "SO, this is happening!! I’m pregnant & apparently already prepping for actual labour."

Celebrity friends were quick to comment on the news as Stacey Dooley wrote: "Congratulations darlin!" with three purple heart emojis.

Angela and Roy welcomed their first child Ruby Ellen at the end of February of 2018.

At the time, the Irish presenter shared the news with a sweet snap of her little girl's feet on a blanket.

Angela's happy news comes just weeks after she had to be taken to hospital following a "pretty bad" car accident.

The star was involved in an accident at Bishops Avenue in North London, which involved a number of cars and a private ambulance, according to reports.

She was said to have been "rushed to hospital" after being "treated at the scene", which sparked concern from fans.

Angela later shared a clip of herself reassuring fans that's she's "absolutely fine". She said: "Hi, quick one to ease some of the panic from my friends and family and anyone else who has sent me a message, thank you so much.

"I'm absolutely fine. There was a car accident yesterday, I was in it, it looked pretty bad. Nobody was hurt, thankfully. We crashed into an ambulance there was a two…"

Angela paused for a moment and went on: "Anyway, they were amazing, everyone was amazing. I did have to go to hospital just as a precaution but I was out yesterday evening and, yeah, I took a day off – absolutely fine. Both drivers, fine.

"Yeah, don't know what else to say. Thank you and sorry if anyone panicked. I panicked a bit when I saw it! So, anyway, thank you again," she then ended her message by blowing a kiss at the camera.

Stay up to date with all the latest on Angela Scanlon by signing up to OK!'s daily celebrity newsletter.