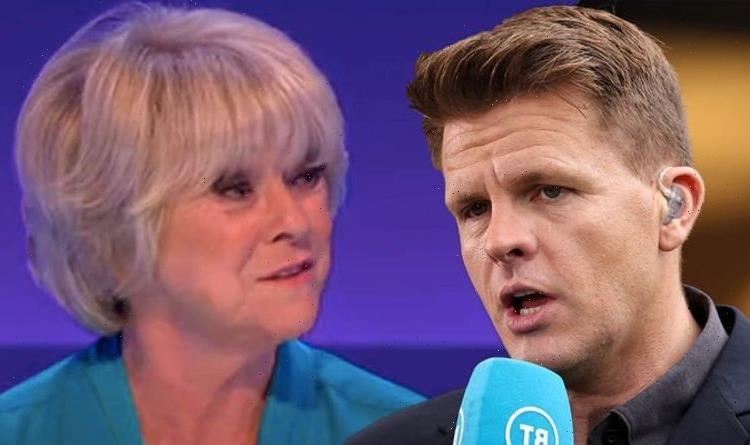 Jake Humphrey, 43, is best known for being the main presenter of BT Sport’s football coverage, and has guest starred on A Question of Sport a number of times while Sue Barker, 65, was the host. He has now recalled exclusively to Express.co.uk a very fond memory he has with the former tennis player.

That was a really big moment for me.

Jake revealed that Sue is a “great supporter” of his, with the pair having kept a close relationship through the years.

Recalling one event she was there for him, Jake said: “I remember once I was on air and for whatever reason I was getting criticism from people, which is what happens if you work on the telly.

“I was thinking, ‘I wonder what I’ve done on this particular show to get all this criticism’ and then I had a message from Sue Barker and it was totally unrelated to the fact I was looking at social media.

“She just sent a message, saying, ‘Hi, I’ve watched BT many times but tonight I am watching the Liverpool game. You are so good.

“‘I could sense you were getting over a cold but you were brilliant! Lance [Sue’s husband] and I have said you are the best football presenter on TV. You always ask the questions the punters want to hear’.”

Talking about how this made him feel, the presenter continued: “That was a really big moment for me as I was getting so bothered by the criticism from people that don’t know what it’s like to be on TV and to do that job and to walk in my shoes.

“Then there’s Sue Barker who does know what it’s like and tells me I am doing a great job.

“It’s a good reminder to have a circle of people around you that you really trust and relate to, and you understand them and they understand you. Those are the people we should always make sure we are listening to.”

Jake admitted he was sad to see Sue lose her role on A Question of Sport after the BBC announced a show shake up.

It was confirmed in September 2020 that Sue, Phil Tuffnell and Matt Dawson would not be returning to the show.

A BBC spokesperson said at the time: “We would like to thank Sue for her enormous contribution as the show’s longest reigning host over the last 24 years, and Matt and Phil for their excellent team captaincy.

“Together they have ensured A Question of Sport remains a firm favourite with the BBC One audience.”

Jake commented: “I was a guest on it a long time ago, and I am a massive lover and huge fan of Sue.

“She is one of my broadcasting heroes, so I was really sad to see that she had left.”

Jake admitted that that he has not watched the show since Paddy McGuiness and captains Sam Quek and Ugo Monye took over.

Jake was not the only one that was “sad” after the A Question of Sport presenting change, with former captain Phil speaking out about the matter.

Speaking to The Telegraph in September last year he said: “It wasn’t like going to work.

“It was just turning up and having a good time with your mates. And then, they sort of said, ‘Right, OK, we’re going to take it in a new direction’.”

Jake is currently promoting his book, inspired by his podcast High Performance.

He draws on interviews from his recordings to see what really makes a high performer.

Speaking about the book, he said: “Realising that we are all responsible for our own lives is really really powerful and that was the reason for writing the book, because I just want people to pick it up, read it and start 2022 with a slightly altered mindset that they can be as successful as they like.”

High Performance: Lessons from the Best on Becoming Your Best by Jake Humphrey and Damian Hughes is published by Random House Business on 9 December.