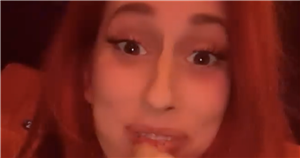 Stacey Solomon treated her children to a festive trip to see a pantomime show on Tuesday, 22 December, and shared her enjoyable experience with her followers by posting a series of snaps.

The 32-year-old was pictured just as she was about to leave for the theatre event holding baby daughter Rose, who was dressed in a cute red bow and tartan dress matching the colour of her mum’s newly dyed red hair.

Stacey was also stood beside her two-year-old son Rex, who was dressed in his favourite Spiderman costume, appearing excited to see the show.

The trio were captured in front of a doorway outside surrounded by ivy as Stacey captioned it: “Now Rose, Me and apparently Spider-Man are off to our favourite – Pantomime. I told Rex to dress up and this is what he went with. I’m here for it.”

Later on, the mother-of-four uploaded a video to Instagram Stories of herself sitting in an auditorium eating popcorn during what appeared to be the pantomime intermission, as she stated to her followers that she “forgot how funny” pantomimes were.

Whilst in the middle of speaking to the camera, a hand can be seen in the clip rustling in Stacey’s bag of popcorn before shoving a handful into her mouth unexpectedly.

The TV star turned to her side as she looked at the culprit in irritation, before followers learnt who the cheeky prankster was.

“Why are you such an idiot? Don’t go to the panto with your sister,” Stacey added as she turned her phone towards her suspectful sister, Jemma.

“My sister still as annoying as when we were 7 @label.lady.1,” she captioned.

It seems as though Stacey enjoyed her trip to the pantomime despite her popcorn intrusion, as she left her brief positive review in a following photo that showed the back of her son Rex’s head from their seats ahead of the lit-up stage.

“What an amazing show! Well done everyone @SouthendTheatres, we al laughed the whole way through!” the presenter captioned, praising the show which starred Eastenders actor Brian Conley.

“I’ve missed live shows so much and seeing amazingly talented people perform. @real_BrianConley you were so brilliant.”

Stacey's family trip comes days after baby Rose got to meet her great grandma for the first time on her 93rd birthday.

“Happy 93rd Birthday Grandma. Seeing you on your birthday and Rose being able to meet you for the first time on your special day was just the best,” Stacey wrote about the precious meeting on Instagram.

"We haven’t been able to see you enough over the last two years but we are excited and grateful to start making memories again to love and treasure as much as we treasure you.”