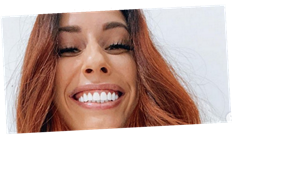 The star took to Instagram to tell her four million followers: “I'm going to put my phone in a drawer for a few days…”

The announcement by Stacey comes after fans questioned whether she was behind the Sausage on The Masked Singer.

Speculation has been rife that the former X Factor star has disguised herself as Sausage on the hit show, and even fiancé Joe Swash had his suspicions.

Ahead of the show this weekend, Stacey has caused quite a stir while saying she’s planning on quitting social media until Monday.

However, she has since reassured fans it’s not because she’s heading to put her disguise on.

Denying she was Sausage, the mum-of-three penned: “Not off to put my sausage costume on I promise. Just sometimes it's needed isn't it I suppose…

"I hope you all have a lovely Friday and a lovely weekend. And I can't wait to see you on Monday.

"Love you to the moon and back."

Stacey’s social media departure comes after Joe jokingly refused to talk to his future wife after believing she really is The Masked Singer character.

Stood in the kitchen with Joe in the background, Stacey said: "I just need to take a moment to appreciate that he's actually not talking to me because he thinks I'm the Sausage on The Masked Singer and I just haven't told him… What the hell!”

Still not believing her, Joe grills the 31-year-old on the clues from the singing competition.

“Listen the Sausage said she loves to relax in a camper van”, Joe said.

Stacey then hits back: “When have I ever liked to relax in the camper van?”

Not backing down, Joe argues: “Well we’ve got a camper van so that is a massive clue.”

The Loose Women panellist laughs and says: “Why would I not tell you of all people? Why would I need to hide it from you!"

Finally coming clean later in her stories, the mum-of-three insisted: "I'm not the Sausage, I promise!"

Fans of ITV’s addictive entertainment series The Masked Singer have enjoyed playing along with the wacky guessing game since it returned for series two.

But soon the wait will be over as the date of the grand final has been announced.

ITV has revealed the remaining top secret celebrity contestants will all be unmasked on Saturday 13th February.

The Saturday night show, hosted by Joel Dommett, will come to a conclusion next weekend, as avid viewers finally discover the stars’ identities after weeks of weighing up the drip-fed clues.

The Masked Singer continues on Saturday at 7pm on ITV.