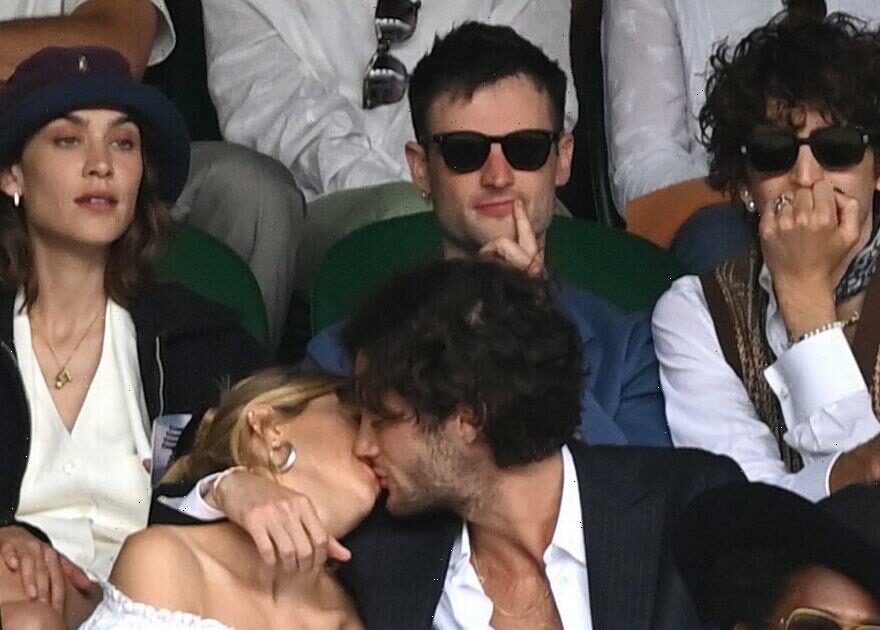 Sienna Miller was spotted in an awkward situation as she was caught snogging her boyfriend Oli Green in front of her ex Tom Sturridge at Wimbledon.

The 40 year old couldn’t keep her hands off her man as they sat in Centre Court on Sunday and the couple were seen at one point during the games engaged in rather a passionate kiss — right in eyeshot of Tom.

Sienna’s ex partner, 36, was sat directly behind the couple with his girlfriend Alexa Chung, 38, and attempted to appear unfazed at their intense make-out session as he concentrated on the tennis game.

Despite the awkward moment, the foursome looked to enjoy themselves at Wimbledon as they cheered on the players and downed some refreshing beverages in their seats.

Sienna was pictured at the tennis match looking effortlessly stylish wearing a white off-the-shoulder dress with a black waistbelt and silver hoop earrings.

The actress wore her blonde hair up with a big brown clasp and added a bright red shade of lipstick to elevate her daytime look.

Oli looked handsome as he wore a black pinstripe suit with a white shirt which was open at the collar and rocked a grown-out hairdo as he sat courtside.

Tom looked dapper in his own signature way whilst sat behind the pair, as he wore a blue blazer with a black Adidas T-shirt underneath, along with a patchwork bucket hat, a pair of black sunglasses and a small hoop earring.

Alexa Chung looked casually cool wearing a white blouse with deep V-neckline and a black hooded jacket and accessorised her outfit with rings and drop earrings.

Tom also shared a lingering kiss with Alexa as the couple sat in Centre Court, confirming their relationship and showing that perhaps he wasn’t that bothered by his ex’s snogging session after all.

Sienna and Oli’s whirlwind romance comes after she called off her engagement to former fiancé Lucas Zwirner, 31, in September 2020, which she addressed in a following interview.

"I've dealt with very public heartbreak. I was never somebody who dreamt of getting married. I've been engaged a few times, but I've never been married,” the star told DuJour magazine.

Sienna referred to her ex Tom in the interview also, as she called in him her “best friend” and a “great father” to their daughter Marlowe, showing that the pair have remained close after their break up.