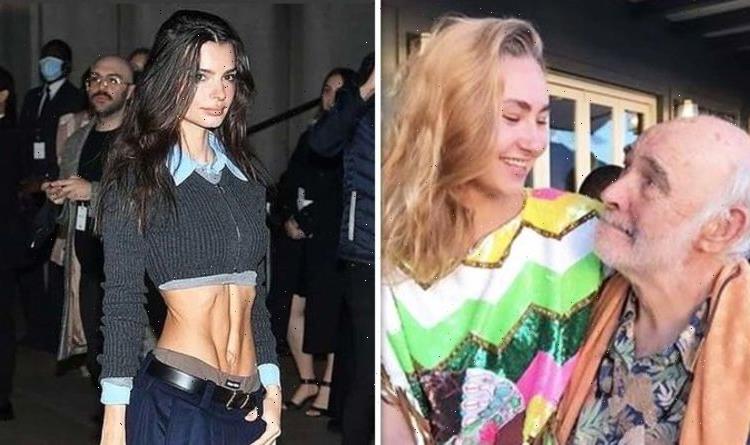 Saskia Connery, 26, who is the daughter of Sir Sean Connery’s stepson Stephane, has been angered by model Emily Ratajkowski, 30, and accused her of promoting an unhealthy body image.

The remarks came after Emily posted a photograph showcasing her toned stomach.

The model wore a tiny crop top and a low-rise skirt so her abs were on full-display.

The photograph was taken from the CFDA Fashion Awards in New York last month, just eight months after she gave birth to her son Sylvester.

Saskia said she has a “big issue” with Emily and declared that the photograph is an “eating disorder catalyst”.

According to MailOnline, Saskia said: “This is not a realistic healthy body weight and should not be praised.

“If you look like this at your healthiest (doubtful if eating stable calories), think about your audience and maybe don’t post it when you have 28 million followers, most of which are young impressionable women.

“I don’t even think Vogue would have that as a cover.”

In a now deleted caption, Emily previously wrote that she second-guessed whether to publish the photo at all due to fears of being “body shamed”.

She wrote: “CFDAs! thank you @miumiu and congratulations @ninagarcia (almost didn’t post this because I knew the controversy it would stir up but hey it’s my body and I’m not going to lean into the shaming! God bless!).”

Its_k_rod said: “How is this being celebrated as healthy and a way in which we want our younger generation to grow up and think that having a stomach looking like you haven’t eaten in weeks is acceptable in our society?

“That looks very unhealthy and not a lifestyle someone should choose to look like.”

Mmechas14 echoed: “It’s your body and a very bad example for your teenage fans that might want try to reach unhealthy beauty standards that don’t even look aesthetic.”

Alexisbledelfashion_fan added: “You talk about embracing one’s body, feel good in your body etc… yet you post pictures of your perfect body and present a post pregnancy body that is so so so very far from reality for the average woman that it truly hurts.

“And it does not feel anything like an embracing nor feminist message behind that post AT ALL. What do you think young girls will think after looking at this post and pictures who are insecure about their body?”

Some, however, did defend Emily.

Ingridtilllman wrote: “You have to feed and take care of yourself to get muscles like that, and some people just have amazing genetics.

“Why do people think they can comment on an obviously fit and healthy person’s body and just keep talking until they feel like they’ve made a point when they don’t know anything.”